There are many of us, at one point or another, who wish they could go and start a completely new life with a brand new identity. The idea of wiping their slate clean and starting new has always appealed to us, but most of us have never acted on it. In “Arthur Newman,” our lead character does just that as he fakes his own death in order to live an interesting, new life. What he doesn’t realize is that the addition of an unexpected companion will alter the way he looks back at his old life and handles his new one. One of the strongest parts of the film is obviously our two lead actors in Colin Firth and Emily Blunt. They went into detail about their own creative process in bringing their complex characters to life in the new film.

So I see the same repore we saw on screen right here before us. I don’t think you two were acting onscreen.

Colin Firth: Without the dog.

Colin Firth: No animals were harmed in the making of this film. Tell that to the dog psychiatrist.

Emily Blunt: Well I think a lot of people want to at some point in their life be someone else, run away, escape in some way. We do get to do it. We have a job that allows for that. We have an outlet for it.

Colin Firth: A lot of people think that these lives seem unremarkable throughout this. I think in some ways for Arthur, probably for both of them, I think he his role up to life is ludicrous. He’s a boy scout, kind of proper– I don’t think it has much to do with him at all and I think people do get stuck in it and try to do what they think is the appropriate thing at every stage and it doesn’t necessarily deliver what anybody else needs. His marriage obviously didn’t work, his relationship with his son is catastrophic, his relationship with his subsequent girlfriend… He’s not getting anywhere with either the golf, the job or anything. All of this sort of doing the right thing in a precious, prissy sort of way, hasn’t worked out. So that was probably the role, that in some ways rather than escaping his true self and trying to reinvent he was probably shedding something that was bogus from the start.

Emily Blunt: I think Arthur is much kinder to Mike than she is to him. I think she finds it kind of baffling at first because she really tries desperately to keep everybody at arms length by adopting this crazy persona.

Colin Firth: They’re both looking for a connection. What could seem like an implausible coincidence that two people that change their identity would find each other on the road, that isn’t really chance. It’s chance that they meet, but she would have gone her own way in the beginning if she had not found out he was lying about who he was. That’s the entire reason she decides to be curious about him and stick with him for awhile, so she’s driven by that. The fact of some sense of commonality there. These are two people who somehow have managed to deny themselves some real intimacy for years and years. Whether they’re looking for that in each other, they find it through the paradox of pretending to be other people. So it’s only when they quite literally dress up as others and talk like somebody else that they actually can express something a little deeper and actually get sexual, get intimate with each other. 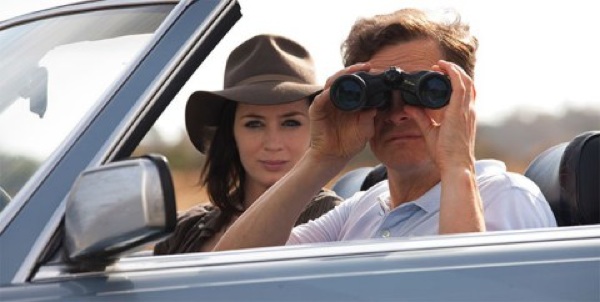 Did you have any sort of a rehearsal process before filming?

Emily Blunt: There wasn’t one really. We kind of sat in a room and–

Colin Firth: We encountered a scene with a preconception about it and think this is what it’s for, this is what it’s about, this is what it’ll be like, this is funny, and then often we were surprised by it. In some ways it always felt like that. The first reading of the script had a lot of mystery to me because I wasn’t sure what it contained. I wasn’t sure who these people were going to turn out to be. It was a little bit elusive and I think doing the scenes, we kept uncovering that… The scene where she gets in the bridal outfit for the first time, I thought that was going to be a romp. The way it read was comical to me. He’s being all sort of proper, we mustn’t be doing this, behave yourself, and she’s like “This will be fun!” and then it was going to be kind of raunchy. Then something else happened when she stood at the top of the stairs. The tone changes and she’s captivated, and actually something rather tender and sad about the need these two people had came out of that. I didn’t see that until we played it, until we did it, and that kept happening, that sort of thing.

The polaroid scene had that too, when you turned the camera around and took a picture of him. There was a sadness there that all of a sudden came out of nowhere.

Emily Blunt: To be honest, that scene we sort of improved a lot of what went on there. That wasn’t really scripted, that moment with the camera. It just sort of happened, we sort of did it. It was nice to work in that way.

Colin Firth: One of the great things about Dante [Ariola] actually is that he comes in with very strong ideas, but he’s rigid about them, and that’s the perfect combination, so you’ve got a great launch pad for everything. A director who’s flexible to the point of where you have absolutely nothing to offer to him at the beginning is no good at all. The same with an actor is the same. Come in with something and be prepared to make it malleable.

How did you like playing Americans and doing your best American accent?

Emily Blunt: I like it. I mean I find that it really helps that I live in the States, I’m married to an American, I have lots of American friends. I think that if you’re immersed in the sounds on a habitual level, that helps a lot. But I don’t necessarily think of it as an accent. I think you’ve just got to find the voice for the person, who that person is becomes the voice, not necessarily finding in just concentrating on getting your vowel sounds right. Even if it’s not perfect, you need to try to do all the technical stuff and just hurl it out the window because you’ve just got to play the character.

These two characters are so different from anything you guys have played in the past. Just to kind of tie into what you said about the voice, how did you prepare to get into their heads? They both have such unique pasts. Did you read about someone who had a mental illness?

Emily Blunt: I read a couple of books, but not a lot. I read some books on it, on schizophrenia and stuff like that, not like Mike is actually schizophrenic, she’s just terrified that she’ll become so. I got an idea for what maybe her upbringing might have been like, witness, what she might have been around with her family. I never really like talking about the process because I don’t know how to talk about it well. I don’t like sounding wanky or what I don’t know what I’m talking about, because it’s really hard… It just sort of happens.

Colin Firth: How much technique you’ve drawn or how much training you have is actually a mystery, or else we would be doing master works every time.

You were talking about the scene with the wedding dress, how it became such a different thing when you thought it was something else on the script. Taking that kind of notion, what were your thoughts when you saw the final product for the first time? Was it any different than you thought it would be?

Colin Firth: To be frank we haven’t seen the final product.

Emily Blunt: We haven’t seen it.

Colin Firth: We saw an earlier cut and it’s… I’ve been told it has not radically changed but it has changed. The sound, the music and pace are different than the version that we saw so we’re a bit of a disadvantage on that note. Again, I don’t know because I’m not quite sure what I expected. I’m not quite sure what I expected the film to be when I read it, I wasn’t quite sure what the finished product was going to be when we finished shooting. I don’t think I’ve ever felt that I’m in such a kind of unknown zone. I felt complete belief in the world that we were in and I felt very warm towards these characters and felt I was rooting for them. I’m very curious to know what would happen to them after this film ends sort of thing.

It’s interesting because what you’re saying is that the script is how I felt as an audience felt “I don’t really know what this is or what’s going on,” specifically the moment at the beginning where it becomes this story of where you steal this man’s wallet and you save him. Why do you think the characters chose to do that?

Colin Firth: I think the characters surprise themselves at every step, and you’re absolutely right. In some ways it’s kind of difficult for this film out there because I think expectations define people and the way they think when’s the romantic comedy going to start? I think if this film were in Swedish or Polish with unknown actors, I think there would be less of that sort of expectation. If you had familiar faces in something that’s to do with people who are inconspicuous and lost, I think it takes awhile to adjust to what it is, but that is precisely what drew me to it. The moment you think here we are, that’s a romantic– actually it didn’t go that way. Here we are, this is a bit where it lightens up, but no it goes that way. I think life is more like that. I find it really conformed to the way that I experienced things.

“Arthur Newman” comes out in limited theaters this Friday. 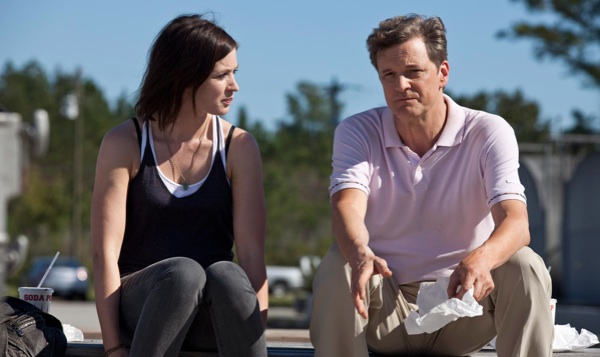