Emily Smith-Dungy (Olesya Rulin) is an aspiring jump rope champion who has just been disappointed for the umpteenth time by her family by not attending and seeing her win at a recent jump rope competition. Her mom Samantha (Kristin Chenoweth) is the workaholic breadwinner and having an affair with her blackberry, her father Duncan (Matthew Modine) is an angst-filled unemployed artist, her little sister Lucinda (Joey King) is an aspiring actress with a penchant for imitating age-inappropriate film characters (Iris from Taxi Driver, Mr Blonde from Reservoir Dogs, Alex from A Clockwork Orange), her older brother Jackson/”Thor” is a gay amateur filmmaker,  her younger brother Mickey is a quiet genius with a fantastic memory, and GG (Shirley Jones) is their vegan/hippie grandmother. Emily gets an idea to kidnap her parents and hold them hostage until they admit the error of their ways and maybe change for the better; her siblings unaware at first become willing participants in the scheme along with the help of GG and Emily’s former best friend/school mean girl Kat (Chloe Bridges of The Carrie Diaries).  They all need to survive the weekend and get the family back on track before Emily’s jump rope finals competition on Sunday.

This film is definitely a “don’t judge by the cover” type film. I took one look at the cover and thought it was going to be lame, and it went into the “watch later or maybe never” pile on my desk. Urged by Shockya’s GM to give it a try, I did and was pleasantly surprised.  I was really surprised that this film was rated R when there is no justification for it. There was one F bomb that actually stood out (I must have tuned out the rest if there were any), a couple of mild sexual references, some pot smoking/pill taking and a quick shot of a porno mag, but nothing that would warrant more than a PG13.

The negative: I didn’t believe Kristen Chenoweth was a mother of 4 as tiny and petite as she is, unless her character had a freak metabolism like Victoria Beckham. The premise is a bit overdone and predictable.  This family isn’t as dysfunctional as the filmmakers would want us to believe. They all get along so well even when they fight.

The positive: I’m glad they didn’t have Kristen Chenoweth sing. Mind you I think she has a fantastic voice, and they did mention that mom sang to the kids when they were sad but I’m glad they didn’t show it; it would’ve just felt like pandering to her fans.  I loved Joey King’s character, she was too much fun.  She did a spot on Jodie Foster impersonation and her reenactment of the ear cutting scene from Reservoir Dogs was so awesome.  The extra in the special features with Lucinda getting into character was cute and funny.  Matthew Modine’s interrogation of Emily’s male school friend with blatant sexual connotation was hysterical.

Regardless of the negative points, I liked it. Family Weekend is a quirky unconventional family comedy with heart and loveable relatable characters. 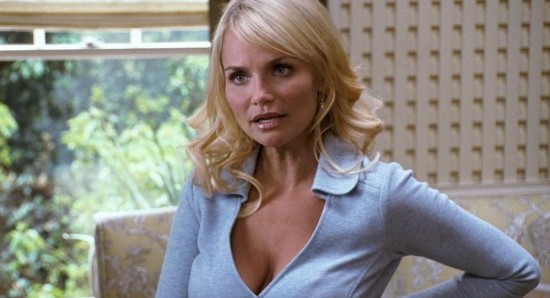