Epic is armed with the arsenal to live up to its name. Thing is, the 101 3D animated minutes don’t quite feel all that.

Mary Katherine (voiced by Amanda Seyfried) is about 17 or 18 years-old and is forced to live with her nerdy eccentric father (voiced by Jason Sudeikis), who is obsessed with the forest he resides in, for he believes a civilization of tiny people are living amongst the trees. He has decked out the woods with the homemade surveillance gear hoping to catch a glimpse of what caused their surmised separation. While “M.K.” is trying to talk some sense into the animated version of Rick Moranis from Honey, I Shrunk the Kids, she ends up stumbling upon the elusive micro-society known as The Leafmen.

The acrobatic archers have been keeping the eco-system lively as they fly atop hummingbirds protecting the wilderness from the evil ban of crossbred rodent-like warriors known as Boggins. Led by Mandrake (voiced by Christoph Waltz), he looks to ruin a prophecy that must be performed by the Queen (Beyonce Knowles) of the mini-forest realm, in order to turn everything that is green into a desolate rot.

At this point, the only element that keeps you engaged is the crisp animation and the unique little people characters. The Leafmen are all human, but the Boggins could be derived from Davey Jones’ crew from the Pirates of the Caribbean sequels or the Orcs from LOTR. And the citizens who fly under the Queen’s banner have some unique nuances (Wizard of Oz-like) to them that will have the youngsters exploring the entire screen. Hell, rock-god Steven Tyler of Aerosmith plays a fun-loving all-knowing caterpillar that assists in guiding the stereotypical fellowship to their goal. So yeah, there’s some charisma the adults can latch onto if the fundamental dialogue isn’t doing it for them.

Speaking of fundamental, that’s the biggest problem with this. Mechanically, everything is on-point, yet the delivery and/or story arc is so familiar that predictability becomes the downfall of this Star Wars tone adventure. Even the characters, from Colin Farrell’s decorated commander of the Leafmen, to Josh Hutcherson’s immature soldier with worldly potential, and of course the obligatory fumbling sidekicks (a wise-cracking snail and slug), they’re all so functional that it can bore to watch. Granted, almost every actor who lends their voice to a character is energetic, but the writing didn’t leave them much to play with.

Basically, everything on display here is too standard-issued. What it needed was some colorful personality (like the robe Tyler’s caterpillar wears) or subtle deviations from the typical cinematic epic delivery and execution. It’s not painful by any means yet you wish for some excitement and few more laughs. 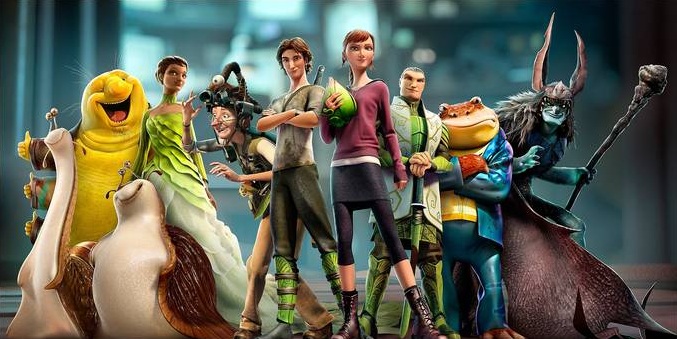