Title: Tumor: It’s In the System

A recent Los Angeles premiere at the 16th annual Dances With Films, “Tumor: It’s in the System” joins a considerable slate of contemporary documentaries — inclusive of Peter Nicks’ raw, verité-style “The Waiting Room” — offering up a damning assessment of different elements of the American health care system. Here it’s a look at how potential alternative treatments and even cures for cancer have been suppressed since the early 1900s — the implication being that some combination of the bureaucratic regulatory system and the rapacious self-interest of capitalism have combined to incentivize managed treatment of symptoms over the long-term health of the population.

Such material has the capacity to tip over into “black helicopter” territory fairly quickly, but co-directors Valerie McCaffrey and Cindy Pruitt, despite a fevered sense of advocacy that sometimes gets the better of their editorial plotting, do a generally good job of interweaving testimonials from an array of open-minded physicians and unusual survivors whose stories belie the myth that chemotherapy is the only — or indeed, even the best — way to combat cancer.

Singer and cancer survivor Melissa Etheridge may be the film’s biggest celebrity “get,” but “Tumor: It’s in the System” is buoyed by talking head academics who do a good job of making a case for the fact that chemotherapy (which, despite an array of advances in modes of deliverance, has not much improved the odds of survival since President Nixon’s Cancer Act of 1971, which allocated $200 million in federal money for research) is generally as destructive and deadly if not more so than many forms of cancer. Tying these facts into Big Pharma’s $162 billion annual profit makes for a sometimes speculative but never spurious connect-the-dots case against the health interests of the average citizen.

Divisive Gerson therapy — one feature of which is coffee enemas, used to cleanse especially the liver — is nominally the alternative remedy that “Tumor” advocates, but the film isn’t an unblinking infomercial for that rehabilitation. It presents a good bit of troubling evidence about suppressive methodology and attitudes toward so-called alternative medicine. And even if McCaffrey and Pruitt’s approach — inclusive of foreboding interstitial quotes from Claude Bernard, Thomas Jefferson, William Shakespeare and the like, as well as a strange tangent tracking down the vacated address of a Food and Drug Administration regional office — sometimes comes across as heavy-handed, it’s never less than well intentioned, and still thought-provoking. 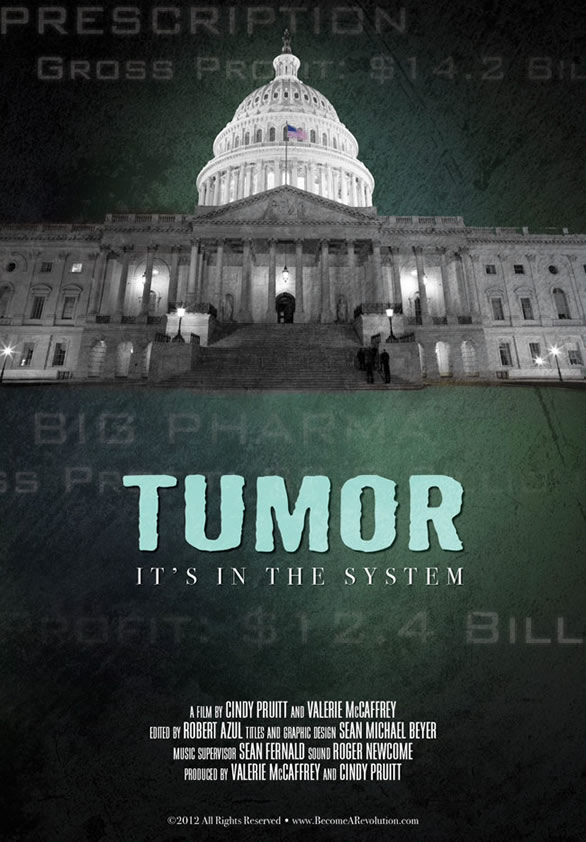