Hannah Has a Ho-Phase Movie Review

Title: Hannah Has a Ho-Phase

Agreeably cast but burdened with an overly predictable narrative and junior flyweight comedic punching power, New York-set indie “Hannah Has a Ho-Phase” is one of those post-“Bridesmaids” laffers (no matter its exact date of origin) that tries to put a Title IX spin on (slight) raunchiness and sexual acting out. In the zeitgeist shadow of something with a much more strongly defined voice, however, like Lena Dunham’s HBO series “Girls,” this slice of mock-shock has little going for it except for that great title and a few likable performances.

While her roommate and best friend Leslie (Genevieve Hudson Price), a pole-dancing instructor who digs no-strings-attached flings, frequently keeps her up at night with her bedroom antics, 25-year-old advertising associate Hannah (Meredith Forlenza) finds herself in a bit of a dry spell. She’s dating a guy, but not having sex, and so after she spots said dude at a bar making out with another girl, Hannah impulsively accepts a bet from Leslie that she can more easily bed 10 guys in six weeks than Leslie can go without sex for the same time period.

Ergo, titular sexual oat-sowing ensues. All this coincides, of course, with an assignment at work where Hannah is paired with ladies man Donny (Quincy Dunn Baker) to research a potential campaign for a branded, vanity vodka line that a rapper wishes to launch. As Hannah starts to inch closer to hitting her target number, though, she begins to wonder if developing feelings for Donny are, a) sincere, and b) requited. Freed up from base-level attraction, meanwhile, Leslie accepts a date offer from schlubby, mustachioed Seth (Mike C. Nelson), but then struggles to convince him of the genuineness of her romantic interest.

Co-directed by Nadia Munla and Jamie Jensen, from a script written by the latter, “Hannah Has a Ho-Phase” (and yes, that hyphen kind of bugs me) surfs along on a somewhat saucy wave, but it lacks the relative sophistication — and certainly the Dorothy Parker-esque dialogue snap — of films like “Lola Versus” or “L!fe Happens,” to name two other femme-centric comedies of sexual exploration, acting out and/or consequence. A bit of the frank sex talk is funny, but once Hannah enters her blue period, the film’s qualified chasteness comes through; there’s no nudity herein, making for some awkward sex scenes that run counter to the dialogue. Munla and Jensen also seem afraid to mine supporting characters for laughs; the whole idea of the rapper, and especially him wanting to name his brand “Get It,” as a sexual come-on, is amusing, but the character appears once, as a third act throw-away.

Additionally, the means of the movie’s telling certainly do it no favors. The budget is obviously super-small, but “Hannah” is shot in an oppressively boxed-in, lifeless fashion that further flattens the already stagey, thinly imagined scenes.

Thankfully, though, the performances are for the most part enjoyable. Forlenza — who physically favors a mash-up of Rachel Weisz and Nia Vardalos, with maybe a pinch of “Saturday Night Live”‘s Nassim Pedrad — has a certain girl-next-door sunniness, and a nice rapport with Price. Nelson, though, rather quietly steals the show. He’s gifted with a few funny lines (as when Seth queries Leslie as to her “art stance” when they visit a museum), but also nails the probing humor and deferential physicality of a guy punching up above his number. If only the rest of “Hannah” had his same slyness.

NOTE: In addition to its theatrical engagements, “Hannah Has a Ho-Phase” is also available on iTunes and across VOD platforms. For more information, visit www.Ho-Phase.com. 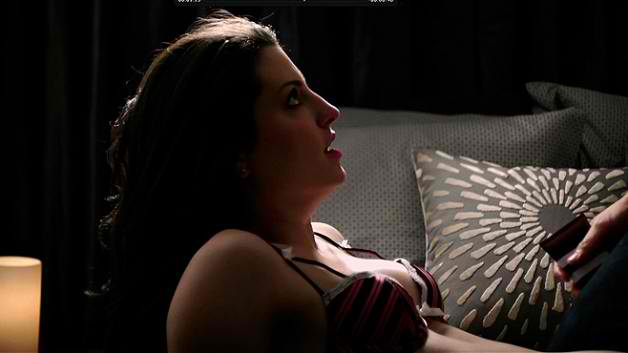