AMC has offered ShockYa an exclusive clip from ‘All Hands on Deck,’ tonight’s episode of its reality series, ‘Small Town Security.’ The seventh episode from the show’s second season airs at 11/10c on the basic cable network. ‘All Hands on Deck’ follows Capt. Starr and his force as they work at a rave; Irwin overhauling Joan’s local show; and the Chief adding a new dimension to the office love triangle.

The clip features Bret Tacular, a Bret Michaels impersonator, as he’s interviewed on the ‘Joan Koplan Variety Hour,’ the public access talk show of the JJK Security Chief. The show also includes a cooking segment with Cal Haygood a worker from downtown Chattanooga restaurant, Sugars BBQ; a belly dancer; and an exotic bird display. The clip also features three young girls being interviewed by Joan’s husband, irwin, as he disrupts her show with his segment, ‘Majors and Minors.’

AMC has released the following synopsis for the second season of ‘Small Town Security’:

Fame or infamy? In Ringgold, Georgia, the owners and employees of JJK Security have welcomed America into their unorthodox universe as the stars of AMC’s non-scripted workplace series ‘Small Town Security’ – and local opinion has been extremely divided. Some Ringgold residents love the show; others in this conservative Southern town are less inclined to embrace the idiosyncratic, expletive-strewn exploits of JJK’s founder, Chief Joan Koplan; her hoarding husband, Captain Irwin Koplan; and their employees, the incomparable Lieutenant Dennis Croft, private eye Brian Taylor, and receptionist Christa Stephens. But anyone expecting Chief Joan and company to tone it down has another thing coming. As Joan so eloquently puts it, “People are entitled to their opinion. But shut up already, it’s not a porno movie.”

‘Small Town Security’ returns for a second season of straight-up and serious security work, love triangles with a twist, sarcasm served over easy, and a generous helping of stranger-than-fiction scatological humor that will draw you in and make you look away, all at the same time. In the new season, Irwin goes on a sales offensive and grooms a new apprentice, the loquacious but grammatically-challenged Christa. With her Parkinson’s disease in check, Joan is feeling like her frisky self once again…and is finally free to let loose. Dennis continues to take exciting steps forward in his gender transition from female to male, while always maintaining his single-minded devotion to JJK and his beloved Joan. As always, Brian keeps the proverbial trains running on time – while Lambchop, Joan’s ter’or of a Chihuahua, keeps up a steady pace of napping, snapping and leg-humping. The rabbit hole continues to run deep in the darkly funny world of “Small Town Security.’

Watch the exclusive clip from ‘All Hands on Deck’ below. 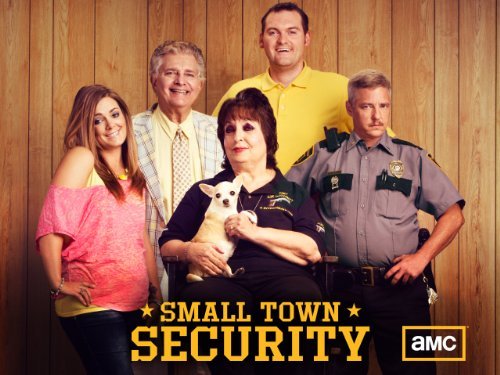