Monsters University is the prequel to Pixar’s 2001 hit, Monsters Inc. (Duh). So yeah, the 3D animation is pretty damn solid (cursing in a movie review for kids is perfectly fine, too).

This 110 minute feature chronicles the cycloptic little green guy, Mike (voiced by Billy Crystal), as he maneuvers his way through the renowned university where all Monsters strive to be “scarers.” Determined to be the best, he keeps his beady eye to the books while avoiding typical college distractions (a.k.a. fun). He then crosses paths with a monster whose reputation precedes him in Sully (voiced by John Goodman). Sully’s family name is legendary in the realm of scaring, and everyone, especially himself, believes he’s going to do great things with minimal effort.

As the semester presses on, Mike and Sully become rivals of sorts, and this leads to them screwing up in school to the point that the intimidating Dean Hardscrabble (voiced by Helen Mirren), a legend in her own right, kicks them out of the prestigious scare program. Down-and-out, the resourceful Mike finds a loophole to get back on track in becoming the greatest scarer ever. But he reluctantly must join forces with his polar-opposite on campus nemesis.

While exploring the vibrant college atmosphere is always interesting, what really stands out in this edition are the timeless, and refreshingly blunt, messages projected out via the characters. Friendship, morals, and the old don’t judge someone until you walk in their shoes themes, really hit home no matter what age you are. And the bravery to show that failure does exist despite hard work is in fact a reality (talk about scary). Now what doesn’t quite hit is the humor; and that also applies to all age groups. Aside from a few physical stunts and the occasional line that goes over the youngsters’ heads yet tickles the adults’ funny bone, there’s really no laugh factor present. It has the tone of something like Cat in the Hat meets Winnie the Pooh. It’s more wholesome than edgy and not all that inventive save for the clever set and character designs.

But wow, do those messages really hit hard (in a good way).

Overall, MU is a coming-of-age story that encompasses all of the stereotypical characters found in like-minded, though raunchier, college products such as Revenge of the Nerds. There’s just less emphasis on creating standout jokes (think the tone of 2009’s Up). It’s technically sound and no matter what your age or attention span is these days, you will definitely pull something out of it. 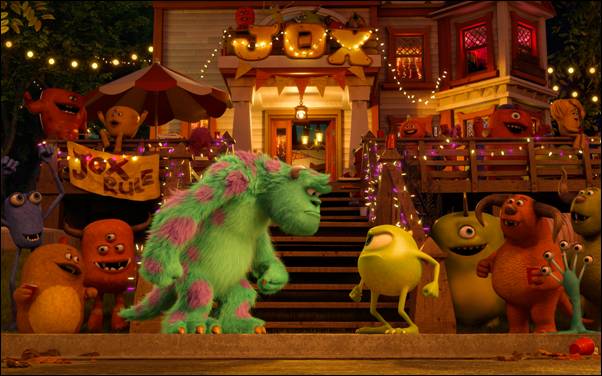