Title: Breakup at a Wedding

Weddings are supposed to be a magical event, a celebration of a couple’s union, the promise of eternity and everlasting unconditional love. For Alison and Phil it’s anything but.

Alison is a confused bride who decides on the eve of her wedding that she’s not ready to commit to her extremely patient husband-to-be Phil. She’s dreamed of this day her whole life. What seems like cold feet turns into a two day struggle of trying to get through a wedding that she doesn’t have the guts to cancel. After telling her fiancé Phil at their rehearsal dinner that she’s breaking up with him, the two decide to go through with a sham wedding. Meanwhile, Phil is trying to secure enough money to buy her the house of her dreams in a move that he hopes will ultimately win her back and get her to legally marry him.

Along the lines of the Office meets Arrested Development, the wacky comedy forges ahead with curiosity taking hold. Alison keeps the story rolling as to whether or not she’ll really leave Phil after the wedding is over. She’s far from your typical, dedicated bride, as she improvises her wedding vows during the ceremony while Jesus on the cross falls off the wall in the background. It’s sure to be an omen. The awkward ceremony paired with the nightmare ordeals she has to take on with her strange family prior to the big day is a disaster that keeps you watching.

There are also some major obstacles for Phil to overcome than the obvious breakdown of his bride. He’s a good guy that has you routing for his success. Phil’s best friend is a drunken mess as well as his struggles to keep his crazy wedding from becoming the next stop for the swat team. The collection of characters introduced in BreakUp at a Wedding is enough to keep interest with a quirky brother and his addiction to chocolate fountains just a blimp on the radar compared to the larpers (live action role play) at the adjoining wedding reception, a streaker and more. Overall, the cast was hilarious with the plot simple and predictable. The comedy has plenty of laughs and train wreck moments that you can’t look away from. The camera work wasn’t anything special, but that goes unnoticed thanks to the crazy scenes that keep rolling. 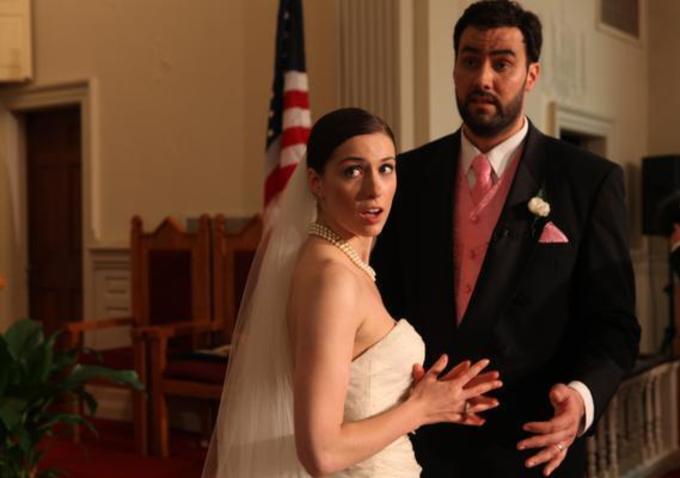