In the vein of “Searching for Sugar Man” and “Anvil! The Story of Anvil,” earnest and engaging nonfiction feature “A Band Called Death” again helps prove that all the best nonfiction music stories aren’t tied up in “Behind the Music”-type bitterness and acrimony, and certainly aren’t related to any level of achieved fame. A warm if slightly overlong tale that sketches an arc of both what sadly might have been and what surprisingly now is bubbling to the surface, the movie chronicles the rather incredible story of three African-American Detroit brothers who, in the 1970s shadow of Motown, formed a punk rock group that predated Bad Brains, the Sex Pistols and even the Ramones.

“A Band Called Death” opens with a barrage of familiar faces — Henry Rollins, Elijah Wood, Kid Rock, the Roots’ ?estlove, Alice Cooper and more — designed to give the brothers Hackney credence. Three of four sons (the oldest was not a band member) of Motor City working-class parents, Bobby, Dannis and David grew up in a household that valued the eclecticism of music as much as the rhythm; the Beatles and the Who were as welcome as Earth, Wind and Fire, and the younger three Hackney’s in quick order turned to rock ‘n’ roll. The tragic death of their father, who was killed by a drunk driver, marked a turning point for their musical experimentation, however. Older brother David christened them death, and they channeled their grief and abiding spirituality into a litany of thrashing tracks.

David, however, was caught up in the notion that the band’s somewhat off-putting (or at least confusing) name was integral to its “concept” — so much so that he convinced his brothers to turn down a record deal from Clive Davis. Their master recordings were returned to them, but nothing ever came of those innovative “Death sessions.” A heavy drinker and smoker, David would drift apart from his brothers — who made a living with a reggae band — and eventually succumb to lung cancer. Years later, however, Death’s tunes would find their way into the hands of collectors, leading to a proper “reissue” via Drag City Records, 35 years after the material’s recording, and sparking an appreciation of their heretofore unrecognized trailblazing status.

Co-directors Mark Covino and Jeff Howlett have an obvious affection for the Hackneys, and their closeness to the family, and the mutual trust they obviously have, makes for a warm, openhearted film. They do a generally great job, too, of mixing in archival photos, performance footage and other audio snippets with a cross-section of modern-day interviews, creating a dynamic and sincere sense of the Hackney family’s love and joy — for both music and one another.

Somewhat paradoxically, the film’s energy wanes a bit once it gets into the details of Death’s rediscovery. Just when it should be really catching flight as a story of unlikely redemption, the movie becomes bogged down by a roster of obsessive collectors. Covino and Howlett seem to feel the need to track the full story, in exacting hand-to-hand detail, of how a particular seven-inch came to be passed along to some ears that mattered. Some editorial trimming on this front would help streamline the story without losing its emotional impact. Little matter, however. “A Band Called Death” still delivers an uplifting tale of resilience and deep family bonds.

NOTE: For more information on the movie, visit http://drafthousefilms.com/film/a-band-called-death. 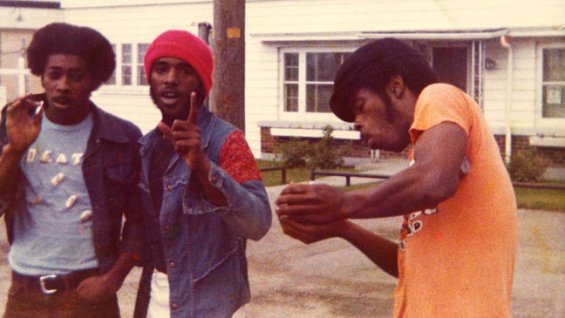