“Adore,” a provocative and sensual film directed by Anne Fontaine (“Coco Before Chanel”) and written by Christopher Hampton (“Dangerous Liaisons”), will be in theaters and On Demand September 6. The film, based on a novella by Nobel Prize winner for Literature Doris Lessing, stars Naomi Watts, Robin Wright, Xavier Samuel, James Frecheville and Ben Mendelsohn and focuses on friends whose relationships take center stage:

Naomi Watts and Robin Wright deliver riveting performances in ADORE, a sensual and provocative drama about two lifelong friends who find unexpected happiness in relationships that cross the bounds of convention. An unpredictable tale of misguided love and a heartfelt celebration of the enduring nature of female friendship, the film is the English-speaking directorial debut of distinguished filmmaker Anne Fontaine (COCO BEFORE CHANEL). It is adapted for the screen by Academy Award®-winning writer Christopher Hampton (DANGEROUS LIAISONS), from a novella by Nobel Prize winner for Literature Doris Lessing…Under the precise gaze of Fontaine’s camera, ADORE radiates with intoxicating sensuality while exploring the intricacies of love, family, morality and passion.

Check out the updated trailer and poster for this film below. What do you think about “Adore”? Give your opinions about this film in the comments section below. 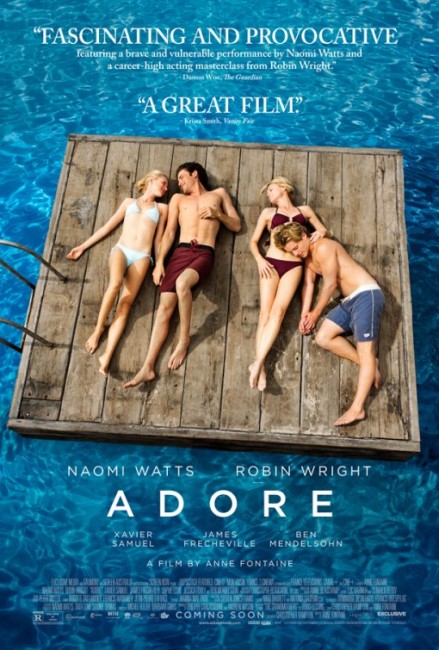