The dreaded Kaiju from director Guillermo Del Toro’s ‘Pacific Rim’ have officially made land fall this morning in San Diego. In response to the threat, Qualcomm Snapdragon Staff Sergeant Max Johnson has released a video message, urging Americans to engage the monsters in combat. To get involved in protecting the country from the unparalleled extra-terrestrial threat, consumers can download the ‘Pacific Rim’ mobile app, powered by Qualcomm Vuforia mobile technology. They can also hone their skills at the controls of their own Jaeger robot to engage the Kaiju in combat.

The science-fiction adventure, which stars Charlie Hunnam and Idris Elba, is now playing in theaters. The film presents a world where giant robots, called Jaegers, battle the monstrous Kaiju, that have emerged from the deep.

The Kaiju’s landfall in San Diego is shown by the monsters’ massive footprints in and around San Diego’s Qualcomm Stadium. The massive craters on the stadium’s field and parking lot from the Kaiju’s footprints is shown through an aerial helicopter vantage point.

Warner Bros. Pictures and Legendary Pictures have partnered with Qualcomm, an official partner of ‘Pacific Rim,’ to create the stunt of blockbuster proportions at the stadium, to celebrate the highly anticipated release of the film. For more information on the acclaimed movie, visit Qualcomm and Snapdragon‘s Twitter pages, and engage in conversation with #PacificRim and #KaijuAttack. Also visit Snapdragon’s Facebook page for details.

Check out the aerial shots of the Kaijus’ footprints in and around Qualcomm Stadium, as well as Sergeant Max Johnson’s Full Field Report, below. 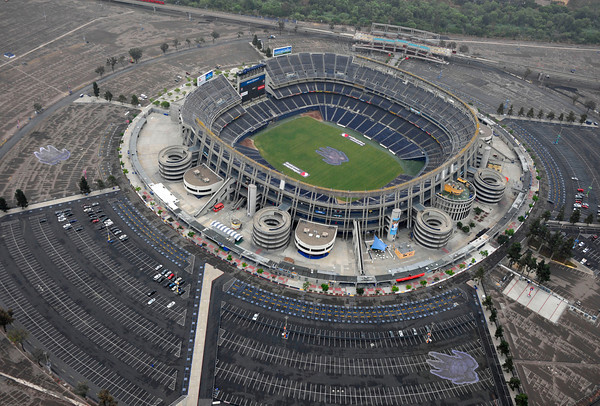 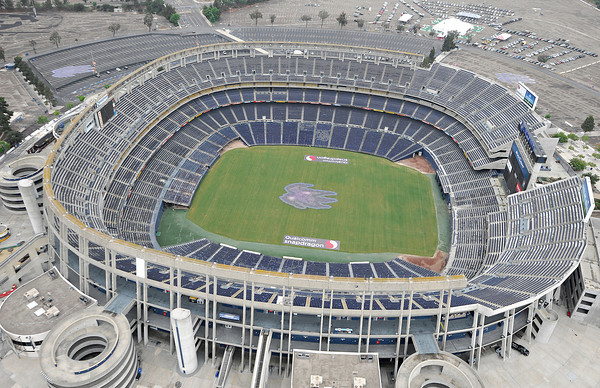