Not only is “The Conjuring” loaded with nightmarish scenarios, but it boasts an exceptional amount of character development, making the experience far more than just a good scare, rather a truly thoughtful and all-consuming experience.

Ed and Lorraine Warren (Patrick Wilson and Vera Farmiga) are a husband-wife team of demonologists. When they’re not giving lectures on their work, they’re making house calls. While the majority result in totally logical explanations for seemingly unnatural bumps in the night, occasionally they do encounter the real deal. One such case occurs when they visit the Perron family in the 1970s.

Right as they walk through the door of their new Harrisville, Rhode Island home, Carolyn and Roger Perron (Lili Taylor and Ron Livingston) and their five daughters immediately notice something isn’t quite right. Their dog acts up and they catch whiffs of a strange smell here and there, but it’s nothing they can’t blame on the mildly deteriorating condition of their new abode. However, when things turn violent and the safety of their children is clearly at risk, Carolyn tracks down Ed and Lorraine and insists they come over to assess their situation.

“The Conjuring” is a remarkably haunting experience. James Wan is a master of the eerie bump-in-the-night scare and while the film is brimming with smart and fresh set pieces, it’s the highly effective brigade of characters that elevates it from being a solid horror film to a stellar piece of cinema period.

You think you’ve seen enough creepy clowns, dolls, and toys that you’re numb to the scenario? Wait until you meet Annabelle. There’s nothing deathly terrifying about the eerie doll tormenting two roommates, but it’s still very convincing, making it the perfect introduction to Ed and Lorraine Warren. From there, their passion and deeply loving relationship is more than enough to sustain even the most out-of-this-world occurrences. Even if you’re the ultimate skeptic, it’s tough not to be persuaded in the slightest. And it’s not just because Ed and Lorraine have a room full of haunted items or because they’ve got footage of a possession that seems irrefutable, but more so because Farmiga and Wilson make a magnetizing duo.

And the same goes for the Perrons. The sisters bicker every now and then, but the Perrons are absolutely oozing with such an honest and appealing familial love that they’re the kind of people you’re eager to spend time with. And that also makes everything they do feel very natural. The hide and clap game featured in the trailer isn’t just some device to usher in a cheap scare. It’s a game they’ve clearly played together many times before and thoroughly enjoy, making it the perfect means of transition into the supernatural components of the story.

The scares in “The Conjuring” don’t come from tacky jump scares or gruesome imagery, rather much more so from the characters’ reactions. There’s one instance where you don’t even see a single creepy image, but the sequence will still have you clawing at your armrest due to Joey King’s performance as Christine Perron alone. Farmiga has a similar effect. The Warrens display such confidence that when something gets under their skin, it’s all the more terrifying. Lorraine is clairvoyant and is able to connect with evil spirits like no other, but as Ed explains, every time she does, it takes a piece of her. It’s one thing to deliver a point like that through exposition, but it’s another when you see it. Turns out, Ed has footage of one such instance and when you see the absolutely chilling amount of fear on Farmiga’s face, you’ll believe the toll her gift takes on her and why Ed is so concerned.

Even though we know Lorraine can get rattled, when the Warrens arrive at the Perron home, it evokes a similar thrill as seeing a superhero arrive to save the day. After laying such sturdy ground for both sets of characters, their union comes with a great deal of satisfaction and not just because it offers hope that the Perrons might pull through this; the Perrons and the Warrens are all kind people and it’s simply a joy watching them connect and spend time together. For the most part, it’s all business with Ed and Lorraine setting up equipment and combing the house, but every now and then you get the pleasure of a simple human gesture, like April Perron (Kyla Deaver) offering Ed pancakes or Ed taking it upon himself to fix up the Perrons’ car. You can’t help, but to desperately want these two families to live happily ever after.

The more engrossed you become in the appealing group dynamic, the more horrifying their enemy’s wrath becomes, partially because the connection to the characters is intensifying, but also because the evil spirit becomes increasingly enraged by the Warrens’ efforts. Thanks to the framework of the Warrens’ three stages of demonic activity, the progression of the story becomes palpable and, in turn, increasingly suspenseful. By the time the climax hits, there’s an ideal blend of wanting to forge forward with what the Warrens have taught you thus far, but also the apprehension that comes with knowing they’re venturing into unchartered territory. The Warrens’ experience and knowhow, the horror and unpredictability of the current situation, and the concern for how it will effect the main players moving forward all unite to evoke an exceptionally visceral and all-consuming form of fear.

“The Conjuring” is just the ideal form of horror, one with deep respect for its source material and audience. There are no scares for the sake of scares. Every ounce of terror comes from the intense connection established between the audience and the characters. You believe in the characters, so you believe in their story, and who knows what you’ll wind up believing after it’s all over. 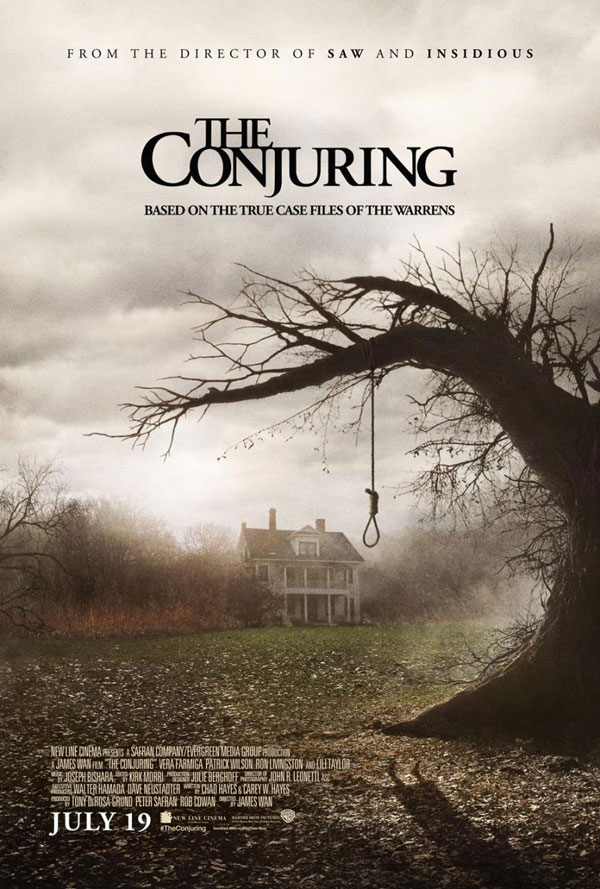