Eric (Eddie Guerra) just got dumped by his cheating girlfriend Tara (Jaime Pressly). Stu’s (Donald Faison)girlfriend Kristen (Roselyn Sanchez) just told him she’s pregnant. Alex (Eddie Kaye Thomas) thinks he has a flawless scheme going on at the racetrack and gets his sexy grandma (Florence Henderson) in on the action. The three friends discover some information on a counterfeit casino chips warehouse and decide to rob it; never mind that it’s owned by the mob. The heist suddenly goes bad and Alex is taken hostage, causing the guys to reassess their lives and rescue their friend.

The Negative: The script may have looked good on paper, but this film was disappointingly boring. The jokes were forced and not funny; I was half expecting a pre-recorded laugh track to fill in the uncomfortable punch line deliveries.  There was poor character development – the only things you know about the three friends is that Eric is a lovelorn pussy hung up on his bitch of an ex, Stu is a pussy with his overbearing girlfriend and Alex is just an asshole.  As soon as she appeared on screen I knew Molly Sims was an alternate of the (forgive the term) “magical negro”- the token character that appears out of nowhere to give some inspiration to the character they interact with and then disappears. Ugh c’mon, she’s a gorgeous girl, but totally unnecessary character. The gratuitous love scene montage with a few of the characters was just useless filler. The interaction with Eric and the butch looking woman (mistakenly presumed a lesbian) had either some bad writing or bad improvisation; the dialogue just didn’t work and felt awkward.

The Positive: The featurette on the extras and the extended scene with Donald Faison and Joe Rogan played during the credits were the only bits where I actually laughed. If Joe Rogan had a bigger part, I might’ve liked this film more because then he could just improvise his heart out. Florence Henderson playing a sexually adventurous grandma was overkill, but it was good to see her go against typecasting.

I tried to like this film, but there were too many characters, and too many intertwining plot lines. It was just a big overwhelming mess. 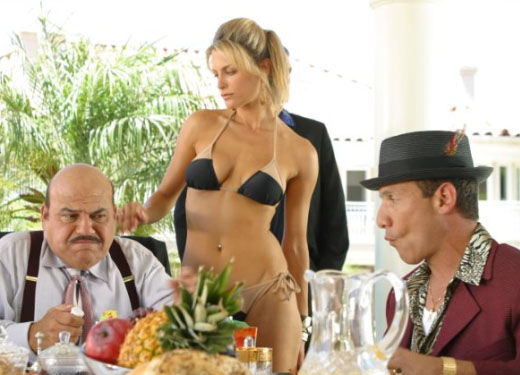