The sexual revolution and women’s liberation that famously helped shape the 1970s immediately spark thoughts and images of a carefree and reckless lifestyle. But underneath the decade’s façade of a fun and raunchy lifestyle was often the emotional and physical abuse and betrayal between families still stuck in the mindset of uncontested loyalty to those closest to you. That abuse and the downfall of fame are examined in the new biographical drama ‘Lovelace,’ which showcases the real pain of America’s first pornography star.

With the help of Chuck, along with pornography producers Anthony Romano (Chris Noth) and Butchie Peraino (Bobby Cannavale), as well as director Jerry Damiano (Hank Azaria), Linda became the persona of Linda Lovelace. She transformed from a charming girl-next-door, and become estranged from her parents, Dorothy (Sharon Stone) and John J. Boreman (Robert Patrick), to become an international sensation centerfold fantasy. Fully inhabiting her new identity, Linda became an enthusiastic spokesperson for sexual freedom and uninhibited hedonism. Six years later she presented another, utterly contradictory, narrative to the world, describing herself as the survivor of a far darker story, including domestic abuse.

Rob Epstein and Jeffrey Friedman, the directors of ‘Lovelace,’ were joined by several of the main actors from the biography drama, including Seyfried, Stone, Sarsgaard and Noth, at a recent press conference in a New York City hotel. Among other things, the filmmakers and cast discussed the process of getting into the characters’ mindsets, particularly since they’re based on real people; how Seyfried and Sarsgaard choreographed the sexual and violent scenes between them before they began filming; and how Lovelace’s two children visited the set and felt like Seyfried and Stone authentically captured their mother and grandmother.

Question (Q): Amanda, you have said it was kind of hard to step into Linda’s shoes. How did you relate to her?

Amanda Seyfried (AS): I think a lot of women can relate to her in that she was kind of stuck. She made some bad choices and she was escaping one bad situation and kind of entering into another bad situation. How can you foresee that?

Before the film was even in existence I didn’t really care about her story when I heard about her, but it’s important to know that everybody has three dimensions to them. You can’t just project your own feelings or opinions about things on to other people because everybody is a human being.

Q: There are some scenes in this movie that are really hard to watch, specifically the violent scenes. Was it hard to film? Amanda and Peter, did you do anything different to prep those scenes?

Peter Sarsgaard (PS): You choreograph scenes like. Whether it’s a violent or love scene, you don’t say, “Okay, one, two, three, go, and figure out what happens and who’s on top and on bottom.” So I think the challenge with scenes like that is to breathe life into a situation that can easily be stilted.

To be able to be loose within that, you need to be able to trust the person you’re with, and I have total trust and faith in Amanda. A lot of people talk about her being brave, but I also saw that she was really going to put herself in the role. I said, “Alright, I’ll meet you there.” When we did, I felt like we had the safety of the people we were working with, who were protecting us. That makes it all possible.

AS: We started at the beginning where we created this foundation together that made us feel safe and trusting towards each other.

Rob Epstein (RE): The four of us had a week of rehearsal time together, and that was key for Peter and Amanda to get to trust and know one another as actors and people. We weren’t really working on the scenes, per say, but more so on the characters.

I think the hardest scenes for all of us where the violent scenes. It was particularly difficult for Peter to go to that dark a place. But like he said, that really informed the performance.

Q: Did you have doubts taking on such a risqué role?

AS: Yeah I mean there’s always the issue of how you’re going to be perceived afterwards with a role like this. After I met Rob and Jeff I didn’t have doubts. There was barely any hesitation because it seemed like the perfect challenge for me.

I needed an emotional education and I also needed to lose myself in something. It really wasn’t that hard. There’s such a stigma about sex for a lot of younger actresses, but I don’t feel like it’s that scary. It was the least of my worries.

RE: Amanda is such a fearless actress. She can do anything from broad comedy, which she has to do in the movie, to really heartbreaking drama, so we feel very privileged to have had her.

Jeffrey Friedman (JF): Linda’s two grown children, Dominick and Lindsay, came to set one day. I remember them being very moved by Amanda’s performance. They really felt like they were hearing their mother’s voice, which made us all feel very good.

RE: They also felt like Sharon’s performance really captured their grandmother. But the thing I think that was most personally moving for us was that Lindsay said after seeing the film, she and her brother are both in long-term relationships. Neither one could bring themselves to read the book or deal with it, as it’s so graphic and disturbing. But now they can show this movie, and their partners, who are so important to them, will now understand how important their mother was to them. So that meant a lot to us.

Q: Amanda, did you really practice on a popsicle?

AS: The popsicle thing was something I was just joking about, but I really did use it because when you’re simulating something, as an actor, it’s easier to be doing something. Technically my lips would be wet so if you want to be realistic. It seemed right in the moment to help. I’m simulating that, and it’s weird to simulate that.

Q: Sharon, where did you go to create this character?

Sharon Stone (SS): I grew up in that era and there were a lot of those kind of ladies where I grew up in Pennsylvania. It wasn’t that unusual to see working women in the 70s; women who worked in coffee shops, women who worked in diners. These women took care of their families, so it was a wonderful opportunity for me to play what this country is really based on, which is real hard-working women who are often single mothers trying to raise their kids.

Q: Chris, did you do any background research on your character?

Chris Noth (CN): Well, the real character was actually the father of the producer. So I was kind of a hybrid, who was sort of made up and sort of based on a real character. So I felt that my job was to make him not just someone who’s moving the plot along, and more of a real person, even though I didn’t have anybody to really base it on.

I would accept the times and what was on the page. The main motivation for him was the same for everybody-money. Although I think he had a soft spot for Linda.

RE: Chris’ character, Anthony, who ends up helping Linda in the end, is based on factual information of Butchie Peraino actually helping Linda escape from Chuck Traynor.

Q: Since there were so many intense scenes, can the cast talk about anything that was going on in terms of hanging out to escape that intensity?

SS: What I can say is that we were making this film fast so there wasn’t a lot of hanging out, but there was a tremendous support system. I can say that the great thing about playing a mother to such a wonderful young actress is that being a mother, you bring that to the set. Seeing a young actress coming to work and giving it her all and moving into such a complex performance, it’s wonderful to see happening with this directing team.

To see this intelligent, thoughtful, prepared, amazing guidance happening for all of us was great. When you can work in a fast environment that isn’t a high budget, but when it’s so together, it’s such a gift. The downtime felt really supportive because of that.

AS: I was happy that we started off with our scenes, because I was terrified the first day. It really would have been different if it had not been you, Sharon. Thank you for helping me through it, especially with your maternal energy. It was also amazing with the three of you (motions to Stone, Epstein and Friedman), especially with that one scene (where Linda and Dorothy confront each other in Dorothy’s kitchen).

RE: Well, that was our second day of shooting. We had to shoot that scene of Linda coming home to her mother and asking her to take her in.

SS: You were smart to do that, though. You were smart to write it like that and put it up front. I think these guys really know what they’re doing, and how to pull us into it. (Stone starts tearing up, and hugs Seyfried.) 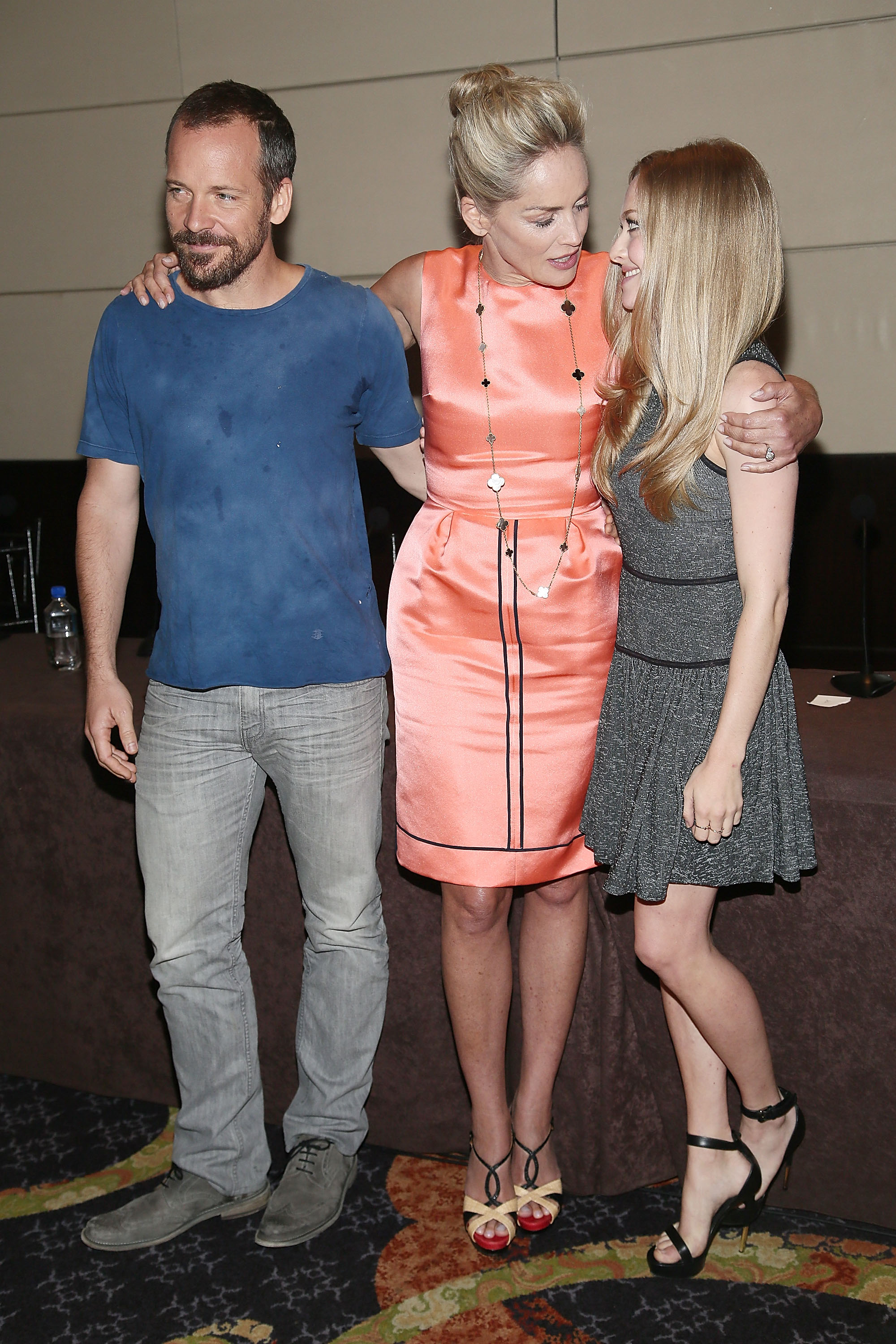