Title: Cutie and the Boxer

Opposites attract. Couples who are too similar break apart. So says Noriko Shinohara, one of the stars of Zachary Heinzerling’s intriguing documentary, one that follows a Japanese-American couple who live three blocks from me in Brooklyn. However, Noriko, having basically the same profession as her husband, Ushiro Shinohara, may argue: he considers her “just my assistant” while she is trying to break out on her own. But they do not fall apart. In fact they declare that their forty-year marriage (he’s eighty, she’s fifty-nine) has no possibility of fracture. Why so? In part because they share their ethnic roots and in part because he has no problem giving her the space she needs to do her own thing. The space in New York’s SoHo galleries may be wide, allowing for all four walls and much of the floor to hold sculptures, paintings, and a wine-and-cheese group of patrons, but their loft in Brooklyn’s hip Dumbo section is too cramped to fit all the unsold paintings and sculptures of this remarkably unusual couple.

Director Zachary Heinzerling, who operates the camera as well as guiding the documentary, has laid out the scenes in the best doc style—meaning there are no talking heads jabbering to an interviewer. The couple are filmed as though they have no idea that a camera lurks in their space, the photographer following them around to the galleries. We don’t know whether the two artists are scripted, whether they improvised allowing Heinzerling to have the requisite numbers of takes before the scenes work out, of whether their dialogue has been accepted without the need for much creative editing.

As Cutie (Noriko) and The Boxer (Ushio) discuss the meaning of life as they see it, we can easily spot the spine, or underlying theme of the movie. This is that as with any married couple or duo living together, there are bound to be jealousies (“You’re not better than I am and I am not simply your assistant”), yet the love is undying. Archival film bounces about now and then featuring the two in scenes decades past. He has a mop of hair that now is almost gone, she cut hers short but now lets the follicles bear lovely braids that make her look five years younger. As though Noriko has enough of a problem dealing with her husband’s grandiosity, she makes sure we know that he was an alcoholic who recently gave up the bottle, and that their son, Alex, who visits occasionally for a meal, drinks wine as though it were water. Alex’s “Self Portrait” is like a scene from a Freddie Kruger movie, a grotesque image that reflects the tortured life he may still be leading.

Theirs is an old story, like the one about the nurse or office worker who puts her husband through medical school and is later shunted aside as “just my Sancho Panza.” Noriko came over from her country considering herself an artist, but had put aside her dreams to be the de facto assistant to her husband, who is twenty-one years her senior. Though the story of a long, secure marriage is the principal theme, there is much to be said for the exhibitions of their work. Ushio specializes in sculptures of bicycles, which he considers hard to sell, making rent payments an iffy thing. He also may be the world’s only pugilist-painter. At eighty years of age he dons a pair of boxing gloves with large sponges attached, plunges his hands into paint, and pounds away at the large canvas on the wall to produce, well, splotches of paint that perhaps an art professional like Ethan Cohen—their agent—could understand. She draws cartoons centering on their marriage, emphasizing the ways that she reigns victorious over him as though the two had the gloves on, her husband lying face down on the floor. What’s more the end credits, one of the best parts of this movie, show the two pounding each other, with the majority of blows dished out by Norko.

Again: this is the way docs should be made. No interviews. Present the characters are though they are in a narrative. Introduce salient archival celluloid, all of which giving the audience in just eighty-two minutes a reasonably firm grasp of the souls of the personae. Warts and all, Ushio comes across as a good man, with some of his needling as little more than a tease, while Noriko at fifty-nine seems ready to strike out with gallery shows strictly on her own work. 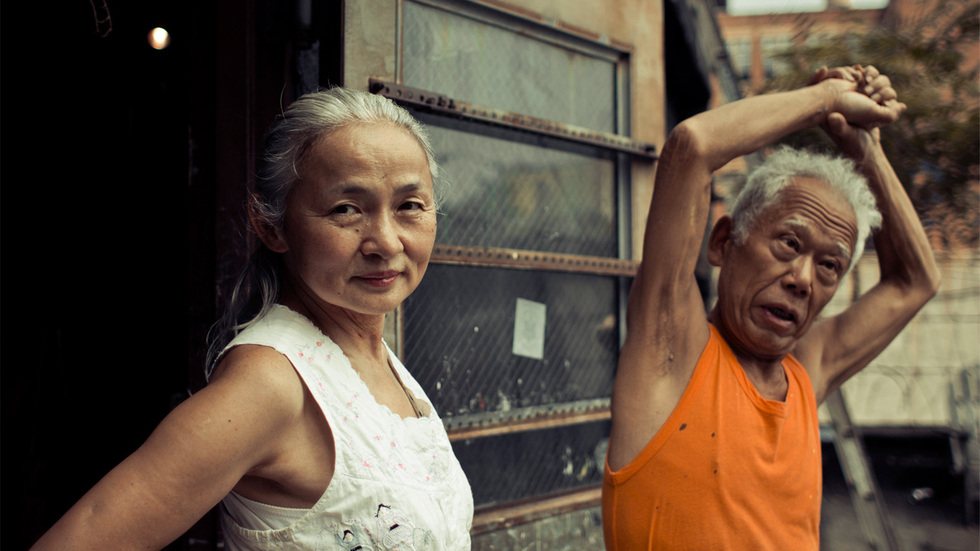