Lars Olafssen is a celebrity artist that hasn’t created anything in over 10 years. He moves to a small Canadian town called Koda Lake for a teaching job at the art school. His only real gripe is he is forced to allow permanent student Eddie in his class. Eddie is a mute, his aunt annually donates generously to the school with the stipulation that Eddie be allowed to attend classes. When Eddie’s aunt dies, she leaves the school in her will only if they agree to take care of Eddie. Lars being the only suitable choice to take on a ward, he reluctantly agrees for the sake of fitting in and for the good of the school. Lars notices something odd with his new roommate, Eddie sleepwalks. Eddie also kills and eats rabbits and annoying barking dogs when he sleepwalks. With Lars to quietly clean up the mess, he is inspired by the gory aftermath to begin painting again. Lars then comes up with the plan to mention undesired townsfolk to Eddie before he goes to sleep, encouraging him to seek them out on his nightly sleepwalking adventures only to fuel Lars’ creativity. Lars however becomes addicted to seeing blood, and Eddie’s sanity is reaching he breaking point.

The negative: I didn’t like that we don’t get to see any of the artwork except for Eddie’s childish stick figures with gore. Yes this film is a low budget indie, but there’s tons of artists out there that would be happy just to get their work seen by the public that they could’ve gotten for free.  Bashing in the deer’s face at the beginning was a tad horrible.

The positive: The film felt like a mashup of Fido and Art School Confidential. Some campy humor, but all in all a good story. The acting was good, the gore effects were bad, but still amusing. The radio DJ describing in bloody detail the stories behind classical music pieces was sardonically charming. I really liked Lars (Thure Lindhardt)’s transformation from an awkward foreign dude in a strange setting to an impassive guy trying to get his art career back by any means necessary. 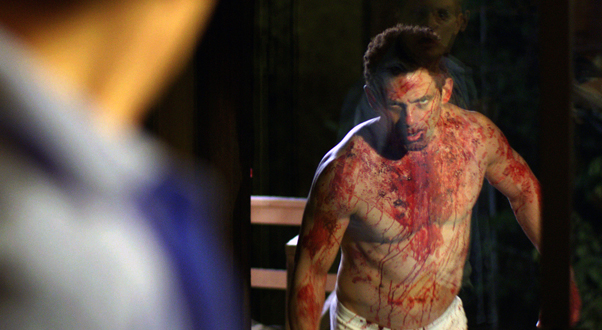