In writer-director Chad Crawford Kinkle’s moody horror drama “Jug Face,” Lauren Ashley Carter plays Ada, a pregnant, panicked teenager who tries to escape her backwoods community when she realizes she may be the latest person to be sacrificed to a mysterious pit that the townsfolk believe has healing powers. In real life, though, Carter is a young New York City actress paying her dues and just starting out in her career climb, which means there are still commercial auditions for a feminine hygiene product superhero (more on that later). For ShockYa, Brent Simon recently had a chance to talk to Carter one-on-one, about “Jug Face,” horror movies, stage fright, auditioning and more. The conversation is excerpted below:

ShockYa: I didn’t know going into it, before I saw his name in the credits, that “Jug Face” had Lucky McKee as a producer… but I think I would have felt that “Jug Face” was of a certain piece with [his films] even if I hadn’t seen that… because it’s nominally a horror film — but also a movie with a lot of dread, and there’s a Gothic quality to it. Was it your experience with McKee on “The Woman” that led to “Jug Face”?

Lauren Ashley Carter: (Producer) Andrew (van den Houten) and I had worked on a film before “The Woman,” “The Rising Stars,” which was more of a fantasy film — very unlike “The Woman” and “Jug Face.” So he and I were very good friends, and we love working with each other. And he comes to me a lot just to get my opinion on things. I’m just a big fan of his. [He gave me a script], I took a while, and finally he called me and said, “I need you to tell me what you think!” So I opened it one night, [figuring it would] take me about a week or so to get through it. I ended up sitting down that night and reading it all the way through, as a straight read, and I called him right back and said, “I love this!” He told me everybody else that was involved in the project, and there was no way I could say no.

ShockYa: Was there a lot of discussion about other thematic antecedents to the movie? Because you could tell the same basic story in a lot of different ways.

LAC: I think the script reads very dramatic, and the story is very important as you’re reading it. The horrific elements of it, they do exist, but I think that the character development was something that was very important for us — especially with all of us being such lovers of the horror genre, both in film and in literature as well. So we were constantly discussing the themes and this community — their relationships with one another. That was the most important thing of all. We knew that the horror would — well, not take care (of itself, but) it would be easier. We knew how to do that.

ShockYa: What was it like working with Chad (Crawford Kinkle)?

LAC: This is his first feature, and I was very impressed. Like I told everyone, the most important thing for me working on this — and being the lead, and having to go through so much duress as Ada, having some of those shocking and difficult scenes that you see — was just that I wanted the communication to be open, and he and I were talking all the time. I said, “I want you to be able to tell me what you need without getting embarrassed or being worried about hurting my feelings, and I just want us to be open with one another.” So we were constantly talking on the phone, also with the other [actors], and it made it very easy, it really did. I have nothing but wonderful things to say about him. He was always very concerned with my safety and how comfortable I was and with the satisfaction of my own performance. And I was very concerned with how his vision was being produced, and that I was giving it everything it deserved.

ShockYa: I don’t know that the film explicitly addresses what time period it unfolds in, does it?

LAC: It doesn’t say explicitly, but we’re going for modern. We’re in the present day.

ShockYa: And yet there’s a timeless quality to it since it’s isolated… it falls into this comfortable “backwoods” sub-genre in horror, that’s kind of removed from time, and therefore doesn’t have to deal with cell phones and technology and what not.

LAC: And there’s been a movement of people that are trying to get off the grid, too — there’s been several films made about that that are dramas. … I always love slasher movies, though, I always have. I love the sorority girls alone in the house with someone inside, as the crazy stalker. I love things like “Hostel.” There’s a certain joy in taking a dramatic narrative and then adding that element of horror to it.

ShockYa: Tell me a bit about your background — were you driven by a performance instinct as a kid?

LAC: (laughs) In elementary school I was always writing little plays for my friends to be in. I was much more of a director than a performer. [Then I got involved in] a community theater and auditioned for a conservatory for college, and basically decided that that was where I was going with it. But I still have a lot of stage fright, to be honest. I’m in a show right now, and I’ve done a few off-Broadway shows, but I still get horrible, horrible stage fright before I go on stage.

ShockYa: Well, it’s totally different than acting for a camera. But do you get nervous on movie sets?

LAC: Yes, it’s different. I get nervous in both situations but they’re different beasts, as you say. …You can get used to it, but it is still sometimes [strange], when you have these very intimate scenes and you have this camera six feet away from you when you’re supposed to be having this very real moment with someone else. But I love film very much. It’s very special to me, and seeing how it all turns out is always just a magical moment for me.

ShockYa: Are auditions something you feel comfortable with then?

LAC: Oh yeah, I do. Auditioning is a lot of fun for me. When you’re in between gigs — and when you’re starting out that’s what you get, you get gigs, unless you’re very lucky — in the interim, auditioning is your job. So I look forward to it very much. (laughs) Of course there are some very special scripts that may not be as well written as you’d like them to be. That always takes a special effort — like on a commercial where you’re supposed to be a feminine hygiene superhero. Coming from someone who’s very sarcastic, that one was difficult to keep a straight face. (laughs) But when it’s a good project — or even when it’s not, when it’s something showy or difficult — I do love doing it, you have to, I think. You have to enjoy those moments when you get to act, even if it’s only for two minutes.

ShockYa: Wow, I imagine the feminine hygiene superhero commercial audition is like a double-edged sword — you don’t want to totally tank it, but then you’re also like, “Wow, if I book this… jeez, I don’t know.” 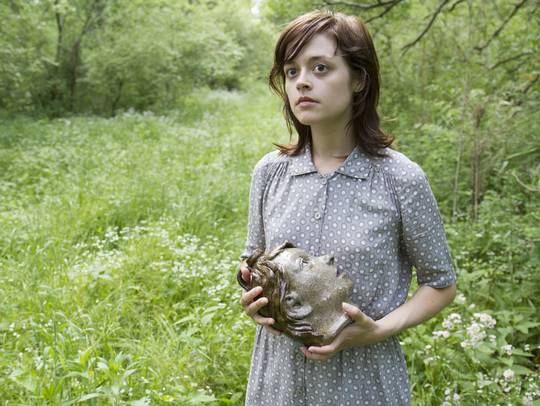