Title: I Give It a Year

A huge portion of the buzz surrounding 2006’s “The Break-Up” had to do with costars Vince Vaughn and Jennifer Aniston taking their offscreen relationship public, and the chattering class dissecting how sincere that was or was not. It became its own little tabloid thing — a more demure, B-story callback to the alleged production hook-up of Angelina Jolie with Aniston’s ex, Brad Pitt, on “Mr. & Mrs. Smith” — and subsequently drowned out what should have been the more interesting story: namely, of Vaughn’s debut as a writer-producer, developing the idea of a comedy rooted in the dissolution of a relationship that was never meant to last forever.

“I Give It a Year” takes the kernel of that same premise and, with a bit less bite, spins it off into a fun, amusing, will-they-or-won’t-they confection — a love rhombus wherein a hastily married couple grapples with mutually wandering eyes. Written and directed by Dan Mazer (“Borat: Cultural Learnings of America for Make Benefit Glorious Nation of Kazakhstan”), and superbly cast, the London-set movie sells an utter fantasy, sure (romantic fissure absent any real churned-up emotional turmoil), but it does so in so good and entertaining a manner — in compact, funny strokes and a breezy, winning tone — as to sidestep all but the most piddling of complaints.

When novelist Josh Moss (Rafe Spall) and ambitious advertising executive Nat Redfern (Byrne) cap their whirlwind seven-month courtship by getting married, none of their friends — a group that includes Dan (Stephen Merchant) and the married, bickering Naomi (Minnie Driver) and Hugh (Jason Flemyng) — much expect it to last. Nine months later, Josh and Nat are stuck feeling the same thing. With the bloom of romance having worn off, their incompatibilities are cast in a starker light. Joint romantic temptation, then, arrives in the form of Chloe (Anna Faris), Josh’s ex-girlfriend, and Guy (Simon Baker), a smooth new American client of Nat’s. As they attend counseling, things at first don’t seem to be getting much better, but they decide to stick with it and push onward, toward their one-year anniversary.

It’s true that Mazer sketches the strife of Josh and Nat in the broadest strokes possible, and doesn’t much root down into hot-flash acrimony in the way that “The Break-Up” rather admirably did. But if one excepts and accepts that element of “I Give It a Year” as a sort of general placeholder for the initial flush of a romantic relationship, when every action of the other party (like misunderstood song lyrics, for instance) takes on an enchanted quality that will eventually not only lose its luster but become downright annoying, then the movie works fine.

This mostly owes to some funny yet unforced set pieces and Mazer’s deft touch with quips, which run the gamut from pointed observational humor (“It looks like he’s either attempting the Beyoncé booty shake or being sodomized by the Invisible Man,” says Guy when sizing up Josh’s dancing) to more barbed putdowns (“Oh, look at you — somebody swallowed a copy of ‘Eat Pray Love’!”). “I Give It a Year” is a film that very much connects on the strength of its joke-writing and delivery.

Mazer has a great cast, too, but this isn’t merely some slice of wind-up cinema, with actors set loose and left to their own devices. He directs them quite well, giving the film’s ensemble scenes real liveliness and pop. Driver and Flemyng give delightful supporting performances as a bickering couple, and Olivia Colman is equally enjoyable as Nat and Josh’s snappish therapist.

Other players, particularly Byrne and Faris, are cast in a bit of a new light. Byrne, so good on “Damages,” has almost always given off something of a cool vibe, but here she’s relaxed and loose — completely at home and in touch with the material, even when playing a more grounded career-minded woman caught up in sudden attraction. Faris, meanwhile, has always rather specialized in characters that exist in their own special mental orbit, but Mazer elicits one of the most subdued, focused and performances of her career. She plays Chloe mostly “normal” and straight — flustered and confused by her ever-present connection to Josh despite his marriage — and is no less engaging for the choice.

Arthouse aficionados and romantic comedy fans alike owe it to themselves to give “I Give It a Year” a chance.

NOTE: In addition to its theatrical engagements via Magnolia Pictures, “I Give It a Year” also is presently available across various VOD platforms. 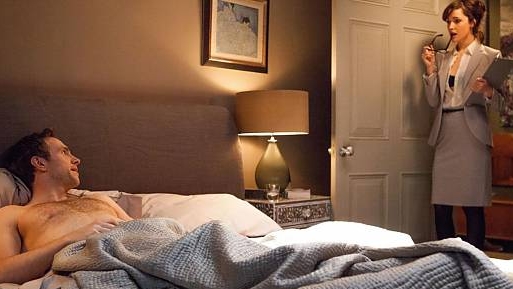