“Jobs” is an entirely wooden and bland representation of the tech icon, but for Apple devotees, it’ll still have an appeal as an informative biopic.

“Jobs” features Ashton Kutcher as Apple co-founder, Steve Jobs. The narrative hones in on him during his earlier years, shortly after dropping out of Reed College. Later on, while working at Atari, Jobs’ enormous ego earns him a make-or-break assignment he truly can’t handle, so he reconnects with his old friend and computer genius, Steve Wozniak (Josh Gad). After fixing the Atari problem, one of Wozniak’s pet projects catches Jobs’ eye, the beginnings of the personal computer. Through his insatiable dedication to creating the best possible product, Jobs forms Apple Computer alongside Wozniak, a company that ultimately grows to become one of the most profitable in the world.

“Jobs” needs to be assessed from two standpoints – as a film and nothing more, and also as a film for the Apple lover. Steve Jobs does not come across as a particularly likable guy for the majority of the movie, but his ideals clearly made Apple what it is today and, personally, that’s precisely why I’m a dedicated Apple user. Jobs wasn’t out to make devices so they could compete in the market and turn a profit; he wanted Apple computers, iPods, and beyond to be as simple and natural to use as your average kitchen appliance, a model that leads to so much more. For those who are as attached to their laptops, iPhones, and iPads as I am, the devices have become almost like an additional appendage, something that’s integral to getting work done, but also something that offers a release through games, lets you connect with family and friends, and more. Many talk of the dream of being able to disconnect, but personally, I could never imagine such a thing. Regardless of the occasional unwanted e-mail, my Apple products make every day better.

There was no writing this review without including that ode to Apple because there’s no denying that my adoration of the products affects my perception of the film. As an Apple diehard, I was firmly mesmerized by the very full two hours of company history. The film’s opening scene was particularly impactful as Jobs’ moving words about his hopes for the very first iPod still ring true in regards to all of the company’s accomplishments today. But even when some of Jobs’ business tactics turn ugly, there’s still this underlying respect for the man because you know what he’s fighting for. Steve Jobs may have been abrasive, but knowing how his worked changed the way we work and live, makes you understand and believe in almost every step he takes.

But moving to the position of reviewing the film as a standalone entity, Steve Jobs just comes across as a total jerk. It’s clear that he was a genius of sorts, but based on the presentation here, it seems as though Wozniak deserved much more of the credit and that Jobs essentially resorted to using his wits, but also throwing temper tantrums to get what he wanted and it’s incredibly off-putting. But that also occasionally winds up being a testament to the success of Kutcher’s performance. It does take some time for his celebrity status to dissolve into the character, and it never really does entirely, but there’s an infectious tenacity to his work that’s highly persuasive and, despite Jobs’ aggression, entices you to root for him. However, despite highlighting Jobs’ more admirable qualities and nailing all of the narrative turning points, the work is almost entirely glossed over to the point that it’s very easy to entirely miss the extraordinary arc this man experienced. The emotion was there, but director Joshua Michael Stern and writer Matt Whiteley seem to have gotten way too wrapped up in presenting a detailed account of the rise of Apple as though the film were a documentary.

There are just so many people, ideas, and factors in play here, that it’s absolutely impossible to keep track of and understand them all. Perhaps for the sake of accuracy you need each key player accounted for in the story, but there’s so many of them that very few manage to make an impression. Josh Gad gets more screen time as Wozniak than most, but he also elevates his character through a stellar performance and some of the film’s more emotional beats. Dermot Mulroney comes close to turning Mike Markkula, an early Apple investor, into a memorable character, but we’re only given access to the basics of his involvement and very little about how he feels about the company’s progress beyond that, and without that, it’s impossible to make much of a connection.

Stern has a similar issue with his visuals, too. There’s a large handful of downright gorgeous frames, but every so often you’re hit with one that’s noticeably ill constructed. For example, there’s one moment when the attention should be on Jobs, but another character’s head is oddly looming in the background making it tough to focus. Further down the line, there’s a scene at Apple HQ involving a big announcement and when we cut away to get Wozniak’s reaction, rather than have your eye drawn directly to him, it’ll take a double take to even realize he’s there because there’s this large video game right in the middle of the screen.

But the more pressing issue is the story. While the movie does need to be accurate, it’s still a movie and the way “Jobs” is formatted will undoubtedly isolate non-Apple diehards because it just isn’t entertaining. There are ups and downs all over the place, it’s tough to get your bearings after time lapses, the pacing is erratic, it’s light on emotion, there are certain details and lines of dialogue that are impossible for the layman to understand, and, overall, few elements feel human. But, as you now know, I’m an Apple enthusiast and for those that share and embrace that designation, there’s an inherent connection to this material. The story may not flow particularly well or have much of a build, but the need to know gives “Jobs” a mesmerizing quality. 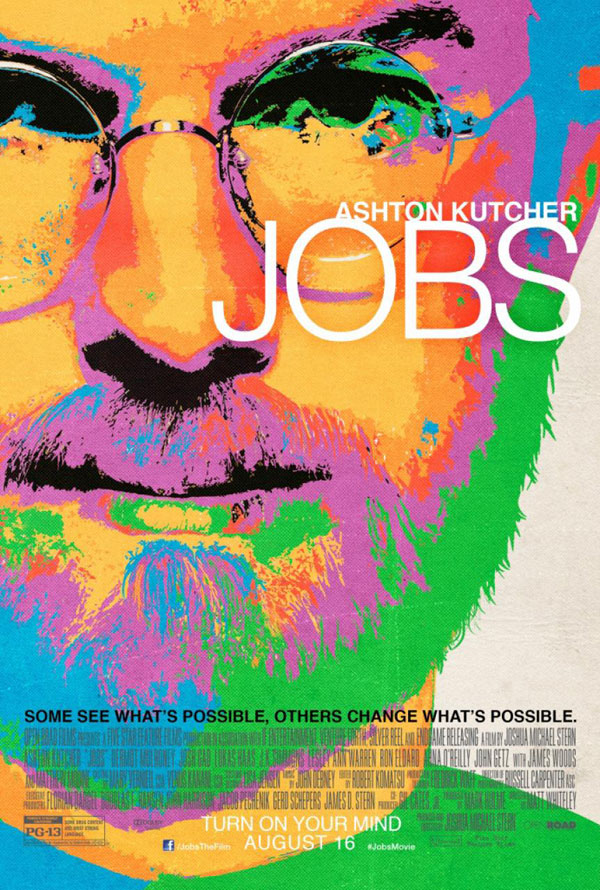