Though on the surface this effort seems slight even by the standards of romantic comedy-dramas, “Drinking Buddies” has some things going for it. Most important, it’s not predictable. It deals with two couples who share a cabin together on vacation, each attracted to the friend’s significant other. By the film’s conclusion, you’d expect the couples to break up and move on but the movie is not that schematic. Further, Olivia Wilde is arguably the most beautiful woman working in the movies today and one of the most charismatic. However, neither Anna Kendrick nor Ron Livingston has a script that can equal the screenplays of Jason Reitman’s “Up in the Air” and Mike Judge’s “Office Space” respectively.

Unless you believe that opposites attract, you’ll soon realize that the two couples do not belong together. Kate (Olivia Wilde), for example, is a free spirit who in one argument shouts “I’m single and I can [have sex with] anyone I choose.” Her boyfriend, Chris (Ron Livingston), is a writer who by his own admission is borderline Asperger’s. She works in a Chicago area brewery as does her friend Luke (Jake Johnson), who is paired with the relatively meek Jill (Anna Kendrick), a teacher of Special Ed. Children. Jill and Chris should have a go with each other as they do in fact, kissing when not in view of their friends.

The four are articulate, rarely arguing and only sometimes talking seriously. They spend their happier times drinking beer, even the dark, lager stuff that Americans are not supposed to dig. The alcohol enables them to speak freely, though Kate could bubble over on non-carbonated Poland Spring water. Jill, who says “um” a lot and refers to “the marriage thing,” would like to tie the knot with Luke, but now Luke, who has second thoughts considering his bond with Kate, is not likely to go through with anything permanent.

Writer-director Joe Swanberg, who has a bit role as a driver furious when his car is blocked by a U-Hall van filled with Kate’s stuff, takes his time in allowing us in the audience to see where the characters are at, but by the second half of the drama, explicit wants and needs are exposed. For me Kate represents the epitome of today’s youthful generation, the women as free with salty language as the men, while Chris might fit in just fine with the fifties generation, uncomfortable with the approaching freedom of the sexual revolution.

For all the mismatches, “Drinking Buddies” comes across as a realistic, if distilled (so to speak), view of the choices that unmarried youths are forced to make in today’s America. 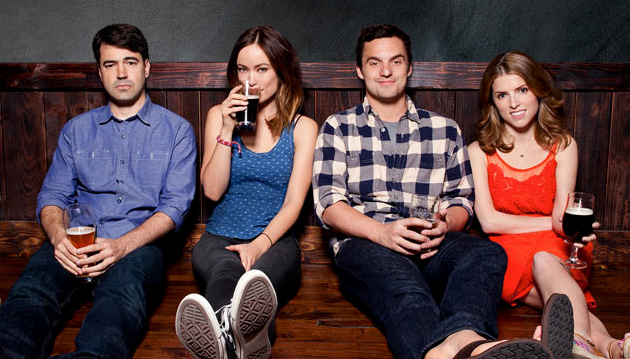