If the background extras staring on in worshipful awe and/or cowed silence didn’t clue one in on Steve Jobs’ anointed brilliance in director Joshua Michael Stern’s film about the influential Apple founder, then cinematographer Russell Carpenter’s reverential framing or, especially, John Debney’s cloying, heavy-handed score surely achieve the same effect. A biopic whose overly literal and demonstrative telling is at frequent odds with a slightly more full-bodied screenplay, “Jobs,” starring Ashton Kutcher, doesn’t attain the same dizzying, high-drama heights as Aaron Sorkin and David Fincher’s “The Social Network,” but instead trades readily on the tremendous native interest that attaches itself to and drives this story, given the significant role Apple products play in so many modern lives. It’s a serviceable little amuse-bouche, but doesn’t feel like a definitive rendering of its subject’s life.

An adopted kid from a working-class Northern California suburb and a headstrong Reed College drop-out, Jobs dabbles in hallucinogenics and travels to India searching for enlightenment with friend Daniel Kottke (Lukas Haas) before taking employment with videogame maker Atari in 1976. Frustrated with not only the daily grind of an office gig (and the accompanying social necessity of showers) but also what he views as the limited imaginations of lesser intellects, Jobs coaxes childhood pal Steve Wozniak (Josh Gad) out of a similarly stable job to start a company manufacturing and marketing the latter’s computer board invention, at a time when a home market for computers didn’t even exist. They hire a couple friends to meet the order of 100 units from a local electronics store owner, set up shop in the garage of Jobs’ parents, and christen their corporation Apple Computers.

An early investor, Mike Markkula (Dermot Mulroney), helps provide the framework for the company, and Jobs’ restless, relentless ambition does much of the rest, launching Apple into the stratosphere and leaving much bigger tech companies struggling to play catch-up. Eventually, though, Jobs’ thirst for innovation and his in-the-bones contempt for the status quo — as manifested by his insistence on pouring massive amounts of company resources into research and development — alienate Apple’s board members, leading to encroachments on his power and an eventual ouster from the company he co-founded.

“Jobs” has a good bit going for it. If his instincts for dialogue and interpersonal conflict are often woefully on the nose, debut screenwriter Matt Whiteley does a good job (pun more embraced than intended) of covering lots of ground in Jobs’ story. He doesn’t whitewash or pull punches about his protagonist’s legendary obstinacy, detachment and dickishness — even spotlighting (if rather awkwardly) scenes where Jobs informs his pregnant girlfriend (Ahna O’Reilly) that her condition isn’t his problem, and then later disavows paternity of said child. Focusing on a period of roughly two decades, from 1971 into the early ’90s, “Job” is also smartly structured, insofar as the movie builds to a natural, mid-level-type climax that occurs before Apple’s greatest tech age heights, when the rest of Jobs’ story, absent his cancer, arguably becomes just more of a string of successes.

Director Stern (“Swing Vote,” “Neverwas”) keeps the action moving at an appropriately brisk pace that ably showcases the tension and fissures in friendship — or, perhaps more accurately, professional alliance — that almost predictably develop once Apple becomes beholden to stockholders. He doesn’t always have the courage to linger on the roughest patches, though; there’s a low, ever-present hum of hero-worship that runs through “Jobs,” which is a bit disheartening. The film needn’t be dark, but the manner in which it dutifully cycles through and shruggingly resolves some of its more pronounced conflicts puts bows on disputes and contradiction not meant to be easily resolved.

Still, the film’s general story and performances are involving enough. Kutcher’s lead turn is one of solid investment. Some may quibble, but his physical similarity to Jobs — the reedy body type and thin face — help go a long way toward establishing an audience rapport, and the actor additionally makes a mostly admirable pass at his trademark ungainly gait and terse, clipped speech patterns. Gad, meanwhile, delivers a centered, sympathetic turn as “Woz,” the closest thing to a reliable or lasting friend in this snapshot of Jobs’ world. In the end, it may not be the authoritative cinematic telling of one of the undeniable luminaries of our time — the aforementioned Sorkin is working on an adaptation of Walter Isaacson’s authorized biography — but “Jobs” is a credible resume entry for almost everyone involved. 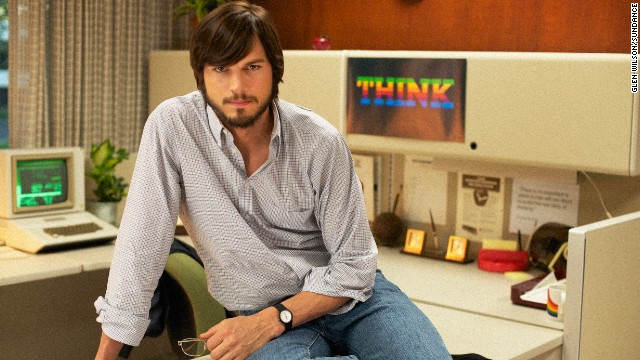