I suspect that first-rate artists have more wisdom than the rest of us, and that we, members of the great majority, should feel lucky if we can at least appreciate their offerings. Mozart gave us great music, Tolstoy terrific literature, and Matisse wonderful, inventive paintings. People like these seem to know more about life than most. Take for example Marc Cros (Jean Rochfort), the principal performer in Fernando Trueba’s Spanish film in the French language. Cros is a sublime sculptor, now in his eighties, a man who gives his latest model, Mercé (Aida Folch), a revisionist view of the first book of the Bible. God created Eve first, and Adam is a result of the union, an imperfect afterthought. Adam and Eve were banished from Paradise for their sexual dalliance, mother and son.

That’s not Cros’s only revelation. He proves to us that God exists, because He created these two items: one is woman, made with a perfect body; the other is olive oil (probably in that order of importance). In the picture’s final scene, in fact, we watch Cros slathering the liquid gold onto a hunk of French bread.

“The Artist and the Model” is a title that brings together two irregular nouns with a gender identity crisis, i.e. el artista and la modelo. The story takes place in the South of France in 1943 not far from the border with Spain. Mercé, a beautiful young woman running away from Franco’s Spain was held for a time in a French refugee camp and has been performing heroic deeds transporting Jews and other enemies of the Nazi occupiers across the border where Franco, bless his heart, refuses to turn them over to Hitler. When Léa (Claudia Cardinale), who is the sculptor’s wife, watches Mercé bathing her foot in the town’s public fountain, she invites her home where she is given refuge and payment for modeling. At first shy about posing, removing her clothes and contorting herself into sometimes painful poses for Cros, later gets over those inhibitions. The two develop a teacher-student relationship: Cros is often grouchy and demanding but Léa knows where her bread gets the oil and remains in the artist’s home.

“The Artist and the Model” takes place in wartime France at a time that the Battle of Stalingrad foreshadows Germany’s loss. Trueba and co-writer Jean-Claude Carrière introduce a “good” German officer, Götz Otto as Werner, a man who speaks fluent French and is writing a book about Cros. He overlooks the possibility that Cros, apparently his best friend, may be harboring Pierre (Martin Gamet), a Resistance fighter.

Trueba, filming in black and white to create the illusion of this period in history (and because he wants to be arty), is as patient as he expect his audience to be. The bond between the two takes weeks to develop. This is not some American action pic with its one-night stands. Cros is careful to state that his wife Léa has had the best body he knows, but appreciates the way young Mercé brings back memories of a more youthful time. Cros takes the time to tutor Mercé, whom he calls a country girl (forgetting that he lives in an Idyllic, rustic area himself), the most involving lesson being a comprehensive analysis of a Rembrandt drawing about a family unit surrounding and aiding a child to walk. His aperçu is that the Rembrandt is connected to real life, a connection he in his old age appears to have lost.

Humor injects itself here and there. A gaggle of eight-year-old boys and girls, fascinated by rumors that a naked woman is living in the artist’s home, sneak up to get a look. María, an elderly woman in the household wearing large round eyeglasses, comes up with some innocent, amusing remarks about the idea of posing. Daniel Vilar behind the camera captures nature in the raw, a cabin surrounded by trees, birds and mountains, all of God’s creations albeit those which are secondary to a woman’s body…and olive oil. 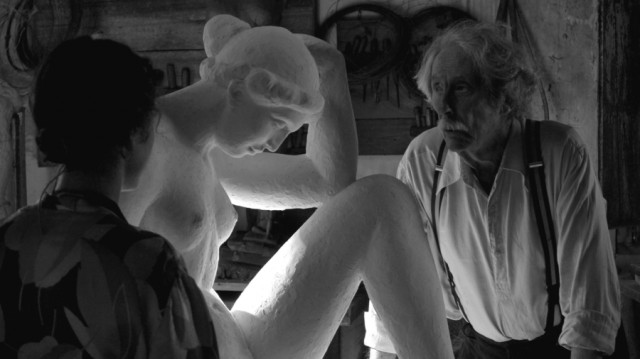