Depending on old friends to help find plausible solutions during emotional times of need has often helped people contend with both new unforeseen obstacles and long unsettled conflicts is an important way for many people to overcome their feelings of despair. But examining both past and current mistakes and repressed feelings with an old friend who disagrees with your life choices, especially when you’re reluctantly forced to rely on each other in an effort to survive, can lead to violent results. That challenge of not being able to trust the one person you used to be able to rely on for anything is the driving force in the new independent thriller ‘Scenic Route,’ starring Josh Duhamel and Dan Fogler and directed by brothers Kevin and Michael Goetz.

‘Scenic Route,’ which is now available on VOD and in theaters, and will be released on DVD on September 24, follows life-long friends Mitchell (Duhamel) and Carter (Fogler), who have drifted apart but have reunited on a road trip. Their old pickup breaks down along the way, leaving them stranded on an isolated desert road. Nobody can pick apart a man like his best friend, and as the relentless elements of the desert grind them down, they start to attack each other’s life decisions with unwavering brutality. As they question who they are and who they could have been, their agitation leads to physical confrontation and ultimately knife-wielding madness. What begins as an inconvenience becomes a very real life or death struggle.

Duhamel generously took the time recently to talk about filming ‘Scenic Route’ over the phone from Los Angeles. Among other things, the actor discussed how he was attracted to the thriller because of the physical and emotional layers and obstacles he would have to work through as Mitchell; how he related to his character in a lot of ways, including looking back and questioning why he didn’t achieve all of the things he wanted to when he was younger; and the strong working relationships he formed with Fogler and their co-directors while filming.

ShockYa (SY): You play Mitchell in the new thriller ‘Scenic Route.’ What was it about the character and the script that convinced you to take on the role?

Josh Duhamel (JD): I think the story in general was something that I was looking for, and it was a monster of a script. It terrified me, because there was so much dialogue in the beginning. Then it became physically demanding. But even though I was afraid of it, I had to do it. It was a chance to prove to people that I could do more than just what I’ve done before.

SY: Speaking of your previous work, you’re known for appearing in romantic comedies and dramas, such as ‘Safe Haven’ and ‘Life As We Know It,’ and sci-fi action movies, such as the ‘Transformers’ trilogy, while ‘Scenic Route’ is a thriller. What inspired you to star in a thriller, and how did appearing in this genre differ from your earlier films?

JD: ‘Scenic Route’ is a psychological thriller with a dark script with layers and nuance. That’s what really attracted me to it. That’s why I went into this business-to do movies like this. I haven’t really had a chance to do something like this yet, though.

Every time I do have the opportunity to be a part of a movie, I try to make it as creatively inspired as I can. Doing a movie like ‘Safe Haven,’ which seems like on the outside to be a Nicholas Sparks love story, but there’s a lot of work to put into a guy who’s a single parent running a grocery store. What is it like to live in this guy’s skin?

That’s what makes what I do so fun. I get to really investigate and live inside somebody else’s life for a while. But I want to keep stretching myself as much as possible in movies like this.

SY: Speaking of the preparation process, what kind of research did you do in order to get inside Mitchell’s mindset before you began shooting?

JD: I related to this guy in a lot of ways, mostly in the fact that these guys were old buddies who grew up together in a lot of ways. I think a lot of people can relate to that. As you grow up and start living your life as an adult, and getting married and having kids, some of those strong relationships that you had before often times begin to drift. I luckily have a group of friends who have stayed very close, but I also understand how everyone changes.

This is relatable in a lot of ways. You look forward to what your life is going to be like when you’re a 20-year-old kid, and all the things you’re going to accomplish. Then you look back when you’re 40, and you’re like, “What happened?” I didn’t achieve all of those things that I wanted to and said I was going to, and I changed my principals and ideals to conform to what society thinks I should be. That’s kind of what these two guys are going through, and that’s what I really related to.

What I didn’t really love about the movie was the way my character felt about his wife. It was a difficult thing for me to watch. Especially now that my wife (Fergie) is about to give birth, she’s never been more beautiful to me than right now. This guy felt unattracted to his wife, and it’s hard for me to understand how that can be.

SY: Dan Fogler plays Carter, Mitchell’s life-long friend, who drifted apart from him until they embark on a road trip together. What was your working relationship with Josh like on the set?

JD: I came onto this movie quite a bit before Dan. I worked closely to the producers and directors to try to find someone who could take on playing such a difficult role. We knew the guy had to be a good actor, and be willing to commit fully to the amount of work that was necessary for this.

Dan, coming from the theater, understood the amount of rehearsal it was going to take in order to pull this movie off. So once we found Dan, and we knew he was fully committed, we spent weeks and weeks rehearsing before leaving for Death Valley. We were figuring out what the guys and their friendship were all about.

We spent a lot of time together. We drove out to Death Valley together after we rehearsed together for a few weeks. We practically lived together; he was in one room, and I was in another room next door. After work every day, we would talk about everything, including the scenes we had to do the next day. Then we’d drive to work together the next morning; it was about a 20-minute drive from the hotel out to the set. He’s now one of my really good friends.

SY: What was the process of working with the film’s directors, Kevin and Michael Goetz, together on the set, particularly since they’re brothers? Did they take different directorial approaches to filming?

JD: That was one of my worries from a dual directorship. I didn’t know if these guys were going to be on the same page all the time, or if they were going to argue. You could go to one, and they could have a completely different opinion on the subject from the other.

SY: Given that ‘Scenic Route’ is an independent film, how did having a smaller budget influence the way it was shot overall?

JD: Well, you always want to have as much money as you can to shoot a movie, as that can make it look so much better. But one of the beauties of making a movie this small is that everyone involved is there because they love it. They love filmmaking and this particular story, and that was the case on this one.

There weren’t any frills on set. We pretty much made this movie on nothing. It’s that kind of commitment and passion that really comes off on screen. Everyone contributed and really worked to make this the best movie they could. So that’s what made this probably the most gratifying experiences working on a movie. 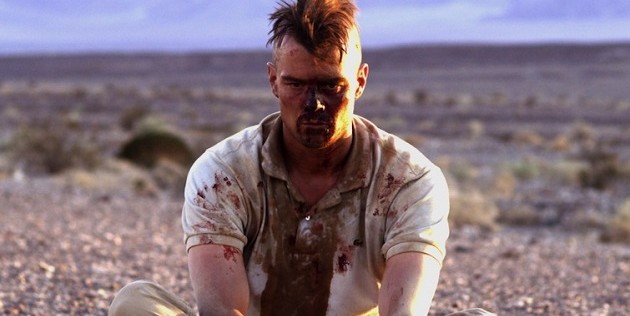