A much buzzed-about premiere at this year’s Sundance Film Festival, Hannah Fidell’s directorial debut, “A Teacher,” details the slipping-knot sanity of a young Texas high school instructor, Diana (Lindsay Burdge), as an illicit affair with one of her students, Eric (Will Brittain), runs its course, from white-hot and secret to its inevitable messy conclusion. For ShockYa, Brent Simon recently had a chance to talk to Fidell and her two stars in person, about the movie’s themes and production, inappropriate crushes, and the film’s as-yet-unrealized viral PR opportunity. The conversation is excerpted below:

ShockYa: “A Teacher” unfolds in a more or less naturalistic manner, but it also seems to have a representational quality as well. How much of the movie was informed by any one of these particular real-life stories about which we’ve heard so much?

Hannah Fidell: None of it. Well, none of the headline-grabbing stories that you’ve read about. …But I did get a book off Amazon which had anonymous stories — more like diary entries, really — of women who’d not been arrested (or caught). So we used that, because we weren’t interested in characters as kind of showy or aggressive as Mary Kay Letourneau.

Lindsay Burdge: But it was helpful to get into the psychology of the character. I guess you always try to do research and find something that will get you (in a character’s mindset0 but I don’t think I’ve ever worked on a role that was as specific as this, in a way — meaning something that’s specific and we know about, and that’s happening all the time, and that there are specific people who have done it and yet most of the rest of us haven’t.

HF: And we both set in on high school classes, but you talked to a friend of your sister’s too, right?

LB: I talked to a teacher, and really took a lot from watching her teach and her daily life and what she did — did she exercise, and what music did she listen to and all that stuff — because I really liked her and she was very attractive and put together and commanding in the classroom. And I could imagine something like this happening to her (laughs), only because I could see boys sort of throwing themselves at her. So I asked her what would happen if she found herself having feelings for a boy or something like that. And she said, “I hope to God that would never happen!” (laughs)

ShockYa: Quick show of hands: who amongst us here had the serious crush on a teacher growing up? (Brittain, Burdge and the writer raise their hands, Fidell does not)

Will Brittain: You didn’t even have any really cool male teachers in college or something?

ShockYa: What was then the impetus behind wanting to make this film, because I don’t think it’s a faulty premise to say that there’s a line of revulsion-slash-fascination between male-on-female statutory rape versus the female-on-male story this depicts.

HF: I think that I wanted to do something a little bit shocking, and I knew too that I wanted to do a story that centered on a woman in crisis. And the real inspiration behind this was that I was working at a restaurant in Austin, Texas, where I was living at the time and where we shot the film, and a boy walked in who was in high school — which I knew because he was wearing his letterman jacket — and I found myself attracted to him, but it wasn’t an immediate physical attraction it was more of an attraction to a Proustian remembrance of things past, in a way. He represented youth, and a part of youth, that I had just left and would never get back — which is that he didn’t have to worry about paying his taxes on time and paying bills and stuff like that. And he looked like someone that I would have been attracted to when I was in high school. So, granted, I didn’t talk to him at all, but that sparked the idea.

ShockYa: The film, to my mind, does take a subjective stance, but we don’t explore a lot of the psychological ramifications on Eric. We see Diana’s inappropriate sharing, and some of the manic qualities that manifest within her as the relationship unfolds. Was it a conscious decision to leave that less explored, or were their conversations about that in rehearsal?

WB: I don’t think it was less explored between us — we  dove down in there.

HF: Will needed to know, obviously. But I think at the end of the day this is a story about Diana, so…

ShockYa: What was the casting process like? This story has big meaty hook and offers a lot for two young actors to play, but it also comes with some big demands.

HF: I wrote the part for Lindsay, and she —

LB: We remember this very differently.

HF: She told me I wasn’t allowed to give the part to anyone else.

LB: I sure remembered her saying, “I thought you should play the teacher.” (laughs) And I went, “That’s a great idea!”

HF: So she may have put the thought in my head. But for Will we had auditions in Austin, where Will was living and going to school at the University of Texas, and he just nailed it.

ShockYa: What was that process like for you, then, Will, and was it then strange to revisit the same scenes that won you the role in the audition?

WB: Yeah, because you see them through a completely different light since you have the whole story then. So you see where different pieces of the puzzle fit. But the process was great, and I remember it perfectly because it was a really awesome audition. And I didn’t know Hannah was the director when I was auditioning. I thought she was the casting director. I didn’t get that information from my agent. So I met with her and I’m like, “Man, the notes I’m getting — this is a really great casting director!” (laughter) And it was just the two of us, no camera or anything, for the first audition, and I think we talked and I literally read the scene twice with Hannah. And then for the callback, Lindsay was there and I didn’t know that Lindsay was the cast actress, so I just thought, again, “Wow, this is a really good reader.” (more laughter) But I think once we got into that audition it clicked and I realized, “Okay, I have to nail this.”

ShockYa: Not to put you on the spot, Lindsay, but if you had to distill it, what does Diana need — what is she lacking or searching for (through the relationship with Eric)?

LB: Well, that is a hard question, isn’t it — and such a big question. I think she’s fundamentally lonely and isolated, and I think she’s created a world inside of her head that only she lives in. I think she probably needs love — I think that’s what missing. I mean, I don’t know, I think we (indicating Hannah) have differing opinions on this, but I personally think that sort of that points to a spiritual lack, but I know Hannah wouldn’t agree with that. (laughs) On some deep level, I think she feels completely empty, and doesn’t have any idea who she really is, and so she’s like a sponge in that sense. When she finds herself with this other person she can claim all of him as her identity, and then she begins to feel like a person. And when he’s not there she just loses it, because she has nothing left. …It’s interesting, because she goes a bit crazy, but I see people go that crazy — or maybe not that crazy, but pretty crazy — on a pretty regular basis in relationships these days. Maybe it’s always been going on, but I feel like people act nuts!

ShockYa: Hannah, for a debut director you paid a lot of attention to the sound design, which often takes on a subjective quality that really places us in Diana’s head.

HF: I worked with a very talented sound designer named Pete Horner, who works at Skywalker (Ranch), which is where we did our mix. We used the sound design to bump up the emotional intensity of the scenes and really make the audience feel like they’re having the same panic attacks that Diana is. And the score was used to do that as well — they really worked hand in hand.

ShockYa: And was the score composed after the fact, after shooting?

HF: Yes, it was done by Brian McOmber, who has now, after this film, scored four films. This was his first one, and we looked at the score as a very important part of creating the whole emotional tone of the film.

ShockYa: What’s next for each of you?

HF: I’m working on a young adult/abusive relationship movie, actually (laughs), and another film called “The Hitchhiker,” which is a remake of the 1953 Ida Lupino noir.

LB: I just wrapped up two films — one in upstate New York called “Up the River,” and one in Virginia called “Some Beast,” which I think is going to be really nice, from the producers of “Upstream Color.” And then I have two films coming up that are more in the horror vein, which I think could be exciting since I’ve never done anything like that.

WB: I’m in Los Angeles now and auditioning a lot, which is great, and am pretty close on a couple things right now, so we’ll see what happens.

ShockYa: Thanks for your time. Also, for the record, I think you should totally be using the domain name LOLPoorPeople.com (mentioned in the film).

HF: (laughs) Actually, we were thinking about doing promos, and just doing a movie of those two (characters), called “Dan and Rich: At It Again.” 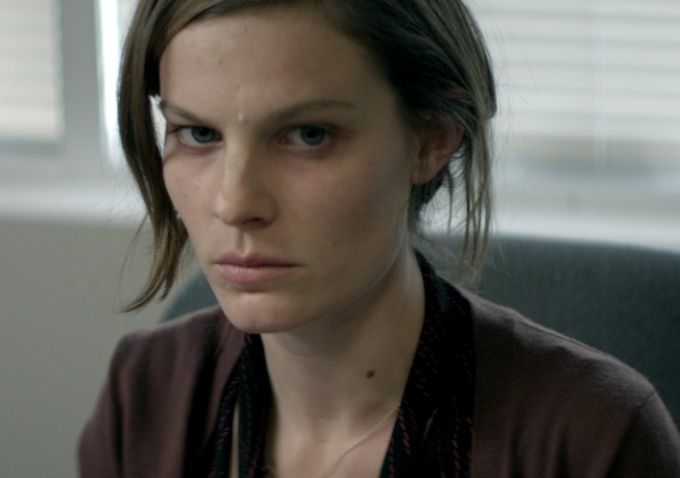