Fully supporting your family during strained and difficult times can be a stressful process for many people. But standing behind them as they struggle to find their place and purpose in the world, and fight against malevolent forces yearning to hold them down, can be both emotionally and physically challenging for families and close relationships. Those stressful challenges are extremely prevalent for the Lambert family in director James Wan’s anticipated horror thriller sequel, ‘Insidious: Chapter 2,’ which hits theaters on Friday. While the characters continue to search for ways to stop the terror that’s plaguing their family, the follow-up’s filmmakers and cast once again searched to find an intriguing story that they hope will once again entertain audiences.

Immediately pickup up where the original film left off, ‘Insidious: Chapter 2’ follows the Lambert family, including Josh (Patrick Wilson); his wife, Renai (Rose Byrne); their sons, Dalton (Ty Simpkins) and Foster (Andrew Astor); and Josh’s mother, Lorraine (Barbara Hershey), as they’re reunited after Josh went into the Further to get Dalton back. However, paranormal events continue to occur to the family, which become more and more terrifying. When the family begins to notice strange behavior from Josh, they start to wonder if it was really him who came back from the Further. With the help of returning investigators Specs (the film’s screenwriter, Leigh Whannell) and Tucker (Angus Sampson), who helped the Lamberts uncover the ghosts that haunted them the first time, as well as one of Elise Rainier’s (Lin Shaye) old acquaintances, Carl (Steve Coulter), the family is once again prepared to fight the spirits that have long plagued them.

Byrne generously took the time recently to talk about filming ‘Insidious: Chapter 2’ during a roundtable interview at New York City’s Waldorf Astoria Hotel. Among other things, the actress discussed how Wan’s skills and expertise as a horror director helped her get back into Renai’s mindset; how filming the anticipated sequel during a short 20-day shoot was exhausting, but helped add to the creativity of the characters and the story; and how there’s an excitement and pedigree to the filmmakers having creative control on an independent movie, which ultimately receives positive feedback and is a financial success.

Question (Q): How was the process of getting back into the mindset of Renai?

Rose Byrne (RB): It was fun. It just hits the ground running, so it was a little more exhausting in that sense. So there really were no scenes of domestic bliss. (laughs) But it was fun, as there was a lot more action, which I enjoy. I haven’t done that much action. As an actor, it’s good to get out of your head, and do something physical.

James is a great director. Everyone came back, and that’s a testament to him. Every crew member came back, and it’s because of James. He just wants to be there, and he’s so enthusiastic. He’s not smug, and he’s really authentic in that way. So in that sense, it’s always been a really harmonious set.

We did the first film, and it was this little movie with no money and no time. It went really well, and it was inspiring to do another one.

Q: Did you have to get into a certain mindset to play this character, to make her believable?

RB: Yeah, once you put on the costume, that weird brown cardigan (laughs) and put those weird curls in, and I saw the kids again, I was back. I was like, there she is! (laughs)

Q: The movie was shot fairly quickly, in about 20 days. Was it a relief to make the film that fast?

RB: It is and it isn’t. Television is also really fast, and I’ve been used to doing a series for a few years. So you get used to that pace, which I like. You have less down time, and you’re working harder all day.

Sometimes things are sacrificed, like you get less takes. There are shortcomings to it, obviously. But for the most part, I enjoy it. It can be taxing, and you can be burnt out by the end of the shoot. But I’m grateful to be working, and I love going to work.

Q: Do you believe in ghosts?

RB: I’ve never seen one-they’ve never come over. (laughs) But I’m ready to roll, but they’re not showing up. (laughs)

Q: What do you think it is about introducing a family dynamic, even if it’s disjointed, like in this one, as compared to the first film, that resonates with audiences?

RB: I think it’s because children are so vulnerable, and the element of that is always scary. There’s something sacred about the family unit. When it’s divided, as when someone’s possessed, it’s far more dangerous, and the stakes are higher. So that’s always exciting to watch as an audience member.

Q: Is that the same for you? Are you a fan of the genre?

RB: Yes, I am, but less so as I’ve gotten older. There is something about the family dynamic that’s so precious. Since the stakes are higher, it’s harder to watch.

Q: Can you talk about your upcoming roles?

RB: I have a role in the remake of ‘Annie.’ It’s shooting here in New York.

Q: You’ve shot a lot in New York. Do you prefer shooting on sets or on location?

But I love shooting in New York. I don’t think you can really recreate that sense of the city, unless you’re here. Working here has been really fun and surreal, to be honest.

Q: In the first scene of ‘Insidious: Chapter 2,’ you confront Josh, and there’s a look of doubt on your face, but you look like you’re trying to suppress it. Can you talk about playing someone who suspects her husband?

RB: James is great, as he ground it in a great reality of like Josh is having an affair. It’s like he’s stepping out, and you know something’s shifted, and your intuition says something’s changed about the relationship. That was a really good starting point, in terms of those scenes. It did ground it in reality, because it really is out there.

The movie really is campy, which I love about it. I think it makes it bold as a horror film, which I appreciate. But that was good, in terms of the performances, to ground it in some sort of reality.

Q: Is there a validation when you make a $2 million movie, and it grosses $100,000 million, as opposed to a tentpole, $200 million movie, where the studio expects a large return? Did you expect the first film to be such a big success?

RB: Yeah, it had a great pedigree, obviously, with Leigh and James. It was also exciting with the first movie, because they, James especially, had previously mainly worked under a big studio, after the original ‘Saw.’ They had gone back to their roots, and there was something exciting about that as filmmakers. It was a real testament to our producer, James Blum, who gave them final cut on those sorts of things. So being on set, and having those experiences, helped us come in with a real excitement.

Q: There are very few times that a film launches a studio, like the first one did for FilmDistrict.

SY: Do you find it hard to switch back and forth between a role while you’re shooting, and then back to yourself when the shooting’s over?

RB: Well, I’m pretty good. I think I can decompress. I was staying in a house that was very rattly, (laughs) and that would sometimes worry me at night, if my imagination got the best of me. I was a little scared anyway, just because of the atmosphere there. I strangely feel safer in New York. You really relax when you finish a movie, and the rest of the time, you’re holding onto it.

Q: Have you stayed in touch with the cast from ‘Damages?’

RB: As an actor, diversity is brilliant. To be able to do something like ‘Insidious,’ where it’s a little more heightened and campy, and then do something pulled back and buttoned up, like Ellen Parsons on ‘Damages,’ and then a comedy like ‘Bridesmaids,’ which is highly strung and emotional, I think that’s brilliant.

Q: Is there a certain type of role that you gravitate towards, since you have done such diverse roles?

RB: To be scared of something is always really good. To say, I don’t want to screw this up, or to be really nervous, is a good sign. It’s a sign you’re not getting lazy.

Q: Are you interested in doing another ‘X-Men’ movie?

Q: With anything that has an engraved audience, is it difficult to stray and do something a little bit different? Are you afraid of distancing yourself from the people who go to see it, like with ‘Insidious?’ Or do you also hope of attracting a new audience, besides the one you already know is coming?

RB: It’s really a question for James and Leigh, being the creators of the films. But in terms of being an audience member, I think it’s great to try to be bold with choices.

Q: What’s the process of working with your accent in films and on television?

RB: In ‘The Internship,’ I did get to use my accent. I also have another film coming out, ‘Neighbors,’ with Seth Rogen and Zac Efron, and I play an Australian in that, so that was interesting.

Q: Since you have an American dialect in projects such as ‘Insidious’ and ‘Bridesmaids’ and ‘Damages,’ is that part of the character that you get to build onto?

RB: I really enjoy doing the accent, increasingly more and more. It definitely helps in finding the voice of the character, and how they sound, and their rhythms. I find it a little harder not to do it now, to be honest. (laughs) The further you can disguise yourself, the more fun it is.

Q: Do you have any plans to work behind the camera?

RB: Only to source material, I think at this stage. I would love to produce or find material. I read a lot, and I try to think more in that sense. That’s probably more where I would head, as opposed to directing. That hasn’t been something I’ve been gravitating towards.

As a woman, the roles are few and far between. It’s competitive for the good ones, obviously. It’s a business, so you’ve got to be smart about it.

Q: Has that been improving since you started in the business, in terms of the opportunities?

RB: On television, I think the roles available now are pretty incredible. Especially with cable, the roles are brilliant. Many of the complex roles are on the cable dramas, which is so exciting.

Q: Would you do another television role in the future?

RB: For sure, if it worked out, absolutely. I probably watch more TV series than films. Particularly for women, the roles are great. The roles on TV are great, and we’re really in the golden age of television, which is really exciting to me. 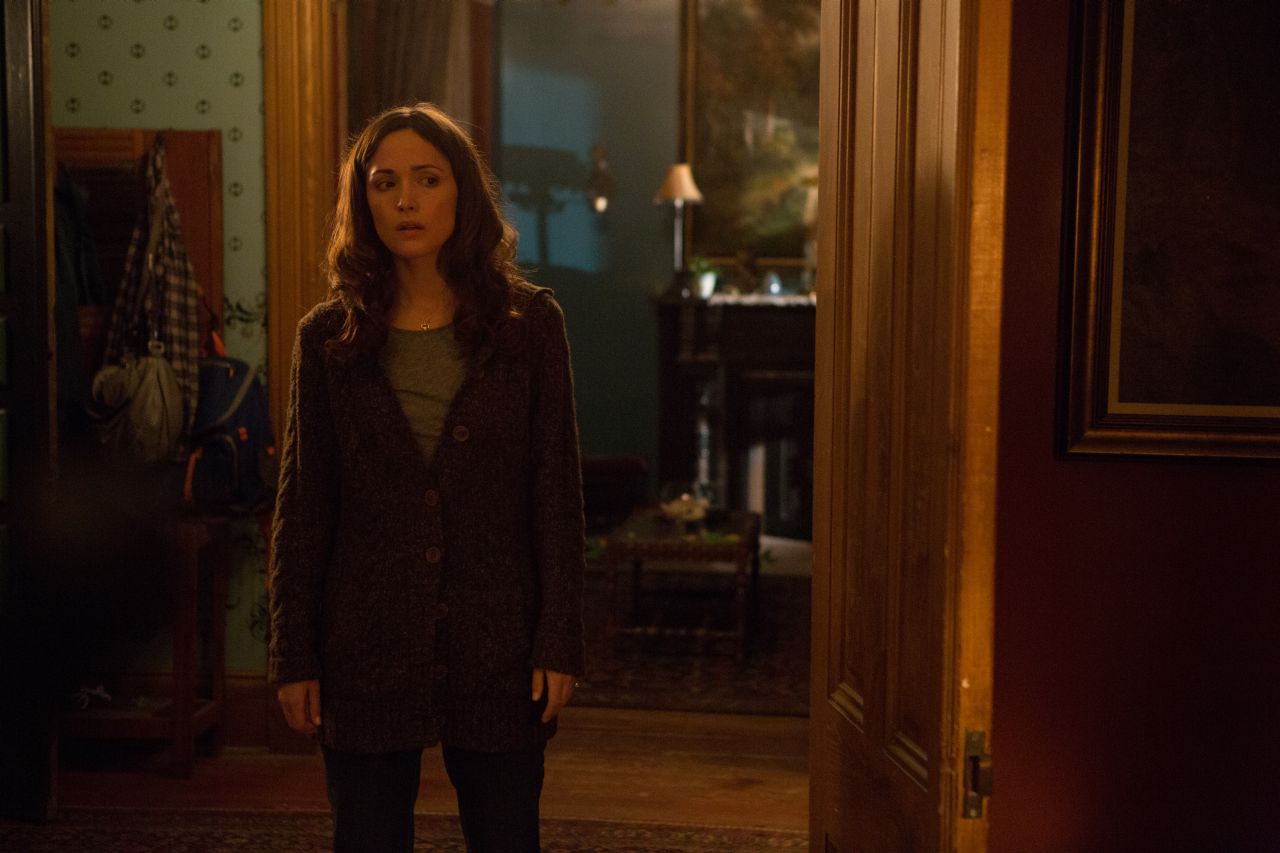