Title: The Secret Lives of Dorks

“The Secret Lives of Dorks” tries to be satirical and plausible and fails at both, but it does manage to conjure up just enough heart to keep the experience from being a total grating loss.

Payton (Gaelan Connell) is a dork, but for some reason he thinks he can get with Carrie (Riley Voelkel), a popular cheerleader. Making the cross clique romance even less likely is the fact that Carrie’s got a boyfriend, Clark (Beau Mirchoff), and he’s the captain of the football team. But this still doesn’t stop Payton and when his persistence becomes too much for Carrie to handle, she decides that the only way to fix the problem is by getting Payton a girlfriend of his own.

The movie’s called “The Secret Lives of Dorks,” but there’s absolutely nothing mysterious about Payton’s life. He’s your typical big screen geek and he’s surrounded by high school clichés. Payton is exceedingly goofy, digs comics, and has zero game, Carrie is blond and struts around in her cheerleading uniform, Clark is the good-looking golden boy, and Samantha (Vanessa Marano), Payton’s new date, isn’t popular, but can be pretty when she tweezes her unibrow. On the other hand, this little arrangement the trio concocts, defies all school stereotypes, tainting the heightened high school environment and making it feel silly rather than funny.

Instead of drawing the line between the popular crowd and the school dorks, Carrie and Clark talk to Payton quite a bit. They tease him and constantly reiterate that he’s not part of their social circle, but they also seem genuinely interested in finding him a girl, and not just for the sake of extinguishing his crush on Carrie. By any other high school rules, such an arrangement simply cannot exist, but here, without that crossover, the narrative can’t exist, so there’s really no choice, but to let the issue slide.

But of course, there are only so many contradictions you can take. In fact, right at the start of the film, Payton announces that he’s got to find a way to build up the nerve to talk to Carrie, but then, mere seconds later, Carrie launches into a tirade about how Payton’s been after her since they were children. That begs question, does Payton have memory issues? And also, is Payton so dense that he can’t take a hint from multiple rejections? It puts Payton on rocky ground right from the start, so it makes it tough to get on board with the endeavor and root for him to get the girl – or at least another girl.

Connell has hits and misses all throughout the film. Payton is an abrasive character to begin with, so when Connell takes certain gags over the top, the results can be cringe worthy. However, then there are other instances where, had Connell not taken his intonation, facial expressions, etc., to an exaggerated level, the gag never would have had a chance.

And that’s the case with the large majority of “Secret Lives of Dorks.” There are glimmers of smart writing and funny gags along the way, but then they’re either worked to death or taken too far. There’s a running Mike Ditka joke that won’t register if you don’t care for/know Ditka, one too many “kick me”-type signs slapped on dorks’ backs, and Jennifer Tilly has to be the least subtle sex-obsessed teacher in cinematic history. This highlights the main issue with the film – it’s so heavy-handed, and it’s often tough to place whether it’s trying to be original or aiming for satire and, therefore, winds up feeling like a failed attempt at both.

An element that helps, but hurts is the animated component. Jacob Chase and David Heinz did an absolutely stellar job editing the film, maintaining the ideal pace and making the transitions into the animated portions seamless, but the problem is, the animated elements aren’t all that funny. They mainly represents Payton’s tangents. Something happens in reality and then Payton imagines the results, carrying him well into a totally absurd version of the future. The shtick works better than it should considering the content of these components, but it’s ultimately a wasted opportunity considering both the editing and animation are quite appealing. Had they developed better jokes, it could have been a truly memorable asset.

Clearly “Secret Lives of Dorks” isn’t a great film. It tries to be original, but never manages to crack the mold and that results in this hill effect; it keeps creeping up and making you think something good could be on the way, but because it never makes it to the top, winds up dribbling back down to the bottom. However, it’s also impossible to say that “Secret Lives of Dorks” is a total failure because no matter how many times you’ve rolled your eyes and scoffed at the material, the payoff is surprisingly satisfying and will even put a smile on your face, and that absolutely counts for something. 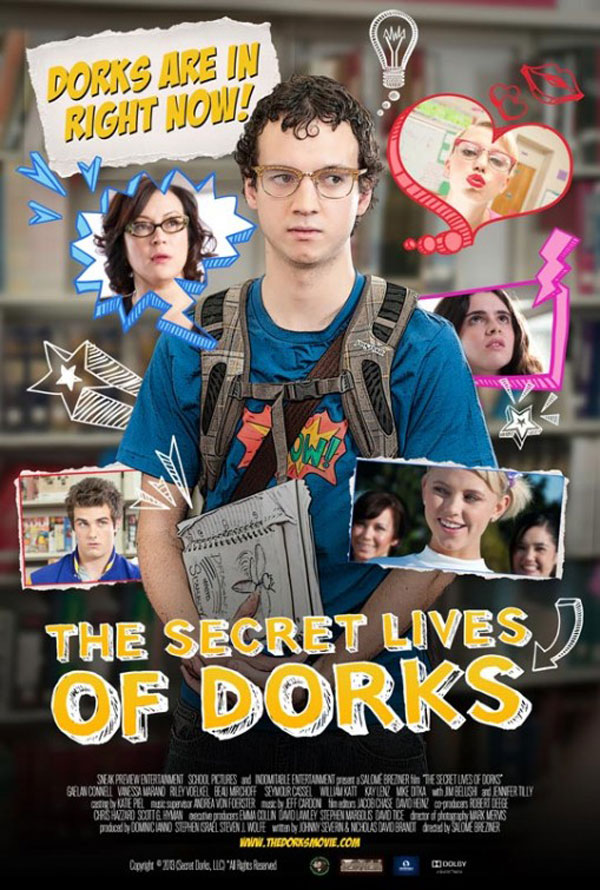