“Family Guy” is generally a hit-or-miss proposition with viewers — they either love its anything-goes humor, and the frequent non sequiturs and lengthy asides which inform it, or they view it as tiresome. For this viewer, the truth is a bit greyer and somewhere in the middle. The fact is, however, that Seth MacFarlane’s show has definitely taken a qualitative dip over the past couple seasons, with its creator heading off to host the Oscars, do movies and focus on developing other shows. Characters (never particularly its strong point to begin with) have fallen back into lapsed habits, and the sense of some moored world, no matter heightened and absurd, has as a result suffered.

It’s a pleasure to report, then, that “Family Guy: Volume 11” represents some of the series’ strongest and funniest material in several years. Gathering all 23 episodes of season 10 (please don’t ask me to explain the show’s complicated home video release history) spread out across three discs, the new DVD set, housed in a complementary cardboard slipcover, serves up more wild antics from the Griffin clan. The scattershot, offense-baiting humor is still in ripe evidence (there are quick riffs on autism, Ethiopian hoarders and tampon commercials, as well as real Joan Van Ark photo which turns Chris to stone), but the stories in this collection are generally much stronger. 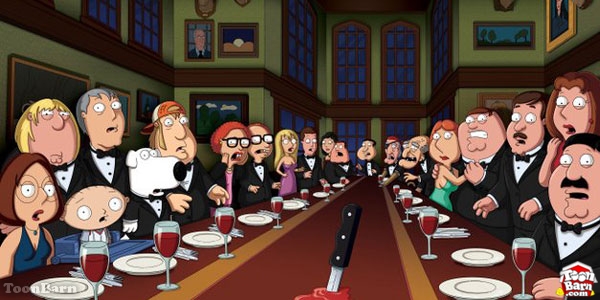 One of the best episodes is a take-off on “Taken,” in which Meg gets kidnapped while abroad in France, and the ridiculousness of cinematic car chases gets the “Family Guy” treatment via some GPS shenanigans. Later, Peter also flirts with joining the Tea Party (spawning a “Just For Eagles” commercial cutaway that addresses the hair needs of bald eagles), and Quagmire aims to put the moves on Meg once she turns 18. The funniest, though, might be “Back to the Pilot,” a ballsy, riotous episode in which Brian and Stewie travel back in time to the series’ own pilot episode and end up preventing 9/11, which has even more disastrous consequences. In addition to commentary tracks there are deleted scenes scattered throughout, though some don’t seem to belong anywhere (nebbishy Mort trading in blow and dead hookers?), let alone in the episodes indicated. Among the other supplemental features is a seven-minute featurette in which MacFarlane’s real-life father answers reader mail, in tongue-in-cheek fashion, sifting through questions about dog penis, Quagmire’s real age and other errors in continuity.

Also on the animated front, “Phineas and Ferb: Mission Marvel” brings together two great tastes in one weird mash-up. After Dr. Doofenshmirtz’s latest scheme accidentally strips Spider-Man, Thor, Iron Man and the Hulk of their powers, these Marvel superheroes enter the world of Danville and team up with Phineas and Ferb to get their respective mojos back, defeat a handful of Marvel supervillains (Red Skull, Whiplash, Venom and M.O.D.O.K.) and, ya know, save civilization from destruction and what not. “Phineas and Ferb: Mission Marvel” comes to DVD housed in a regular plastic Amaray case, but stored in a nice complementary cardboard slipcover that also includes a collectible comic book with an exclusive “Mission Marvel” poster. The seven episodes herein, presented in 1.78:1 widescreen and 2.0 Dolby digital stereo, clock in at just around two-and-a-half hours, giving parents plenty of time to finally take of the laundry on Saturday morning. 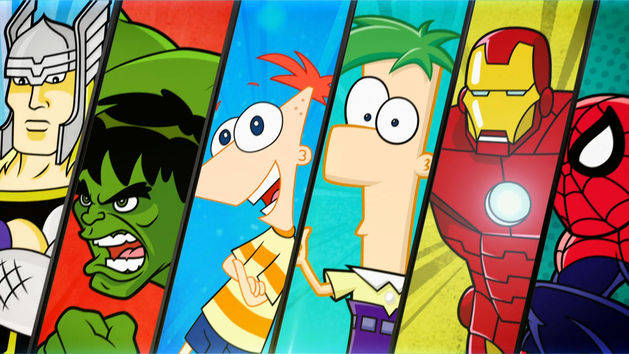 Elsewhere on the small screen front, the fifth season of “The Mentalist” comes to DVD, allowing fans to cram and catch-up before the series’ sixth season debut. In this season, California Bureau of Investigation consultant Patrick Jane (Simon Baker) is drawn further outside the law by his obsession with learning the true identity of serial killer Red John, who took the lives of his family. When the CBI captures one of Red John’s accomplices (Emmanuelle Chriqui), it seems to provide them with valuable leverage in order to coax him out of hiding or at least learn more information. Matters prove difficult, however.

Spread out over five discs and stylishly packaged in a case with a cardboard slipcover that evokes classic movie poster art of the late 1950s and mid-’60s, “The Mentalist: The Complete Fifth Season” comes to DVD inclusive of a pair of special featurettes. First up is a script-to-screen featurette that showcases the care and prudence that goes into filming every stunt sequence, from a high-impact car crash designed and directed by Baker to a meticulously choreographed high-impact car crash with Tim Kang and Owain Yeoman. There’s also another short featurette, “Arresting Excitement,” which shows Kang and Yeoman being put through the paces by the series’ stunt coordinator, Kevin Derr, and some of the police technical advisors that work on set. These are fine bits, though they offer little in the way of replay value; it’s a shame there aren’t audio commentary tracks here, which are pretty close to de rigueur as value-added replay content for home video releases of continuing small screen serials.

The highest-grossing silent film of all time, 1925’s “The Big Parade” is an important forerunner to 1930’s Academy Award-winning “All Quiet on the Western Front.” Directed by King Vidor, the film chronicles Jim Apperson (John Gilbert), a blue-blooded kid who, largely in order to please his demanding father (Hobart Bosworth) and naive girlfriend Justyn (Claire Adams), goes off to fight in World War I. Marched off to the front, Jim meets a pretty French girl, Melisande (Renée Adorée), and bonds with bartender Bull O’Hara (Tom O’Brien) and construction worker Slim Jensen (Karl Dane), fellow soldiers whose pre-war lives could scarcely be more different than his. 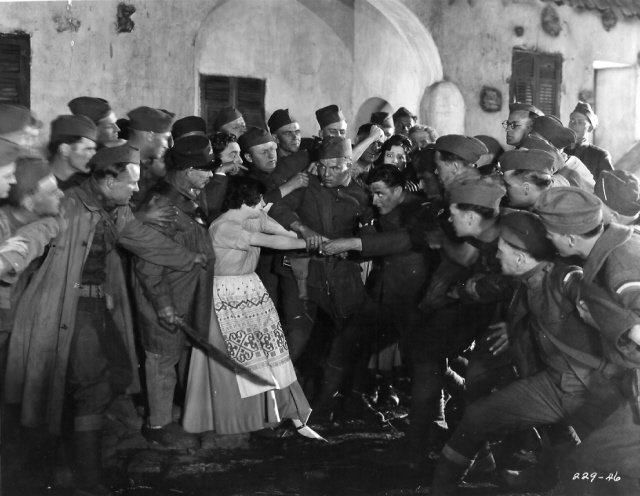 Vidor’s film is a real eye-opener, as much for its narrative accomplishment as its many technical achievements. It’s a considerable credit to the filmmaker that “The Big Parade” is able to juggle such disparate tones, and all without benefit of spoken dialogue. Some of the interstitial cards have jokes (“8 o’clock, me returny,” Jim tells Melisande at one point, while another describes him as going on, ahem, “skirt duty”), but the movie is first and foremost a rebuke to any notion of the glamour of war. It ruins nothing to say that the film’s penultimate sequence, in which an injured American soldier crawls madly after a mortally wounded German counterpart after exchanging gunshots, is one of the more riveting pieces of combat conflict put to film.

Warner Bros. knocks their release of the film’s Blu-ray debut out of the park. A revelatory 4K digital restoration from the rediscovered original camera negative, the film’s superlative video presentation comes divided into 16 chapters, and is grade-A amazing, absolutely free of any edge enhancement issues or artifacting. Better still, the mini-hardback-book-style packaging, with a snap-in tray on the back inside cover, provides proper showcase for a 64-page, full-color look at the film, with comprehensive notes by historian Kevin Brownlow and a dazzling array of reproduced art, photos and advertising material from the movie’s release. In addition to a 32-minute vintage short that spotlights the old MGM studio lot circa the film’s shooting, the other big bonus feature is an audio commentary track by historian Jeffrey Vance.

Honestly, this track starts off a bit rough, as Vance has a tendency to rely on his written notes, and read in plodding fashion. It gets better, though, and thick bands of 24-karat gold are interwoven in the form of a four choice chunks from an oral history of “The Big Parade” that the late Vidor (who died in 1982) recorded with the Directors Guild of America. This tag-team approach — Vance explaining some details about the locations, and Vidor then waxing rhapsodic about, say, a grove of eucalyptus trees in Elysian Park, or the small parcel of unused land they were able to use near the Santa Monica airstrips — works wonderfully. It’s fascinating to hear about Irving Thalberg insisting on adding a nighttime battle sequence after what for all intents and purposes is the movie’s emotional climax, as well as Louis B. Mayer balking at one of the elements of realism Vidor wanted (the filmmaker won the latter battle, but not the former; he was already off making his next picture, “La Boheme,” when George K. Hill was hired to shoot a rah-rah Allied attack that seems out of step with the newsreel realism of much of the rest of the picture).

The amazing anecdotes aren’t limited to the production itself, either. Distribution was of course enormously different back in the 1920s; “The Big Parade” premiered at the Egyptian Theatre in Los Angeles, but Vidor had to loop 800 feet off of his 12,800-foot cut for its run at the Astor Theatre in New York City where it would play for 96 weeks. Local censor boards, too, Vance explains, also had their way with certain inserts here and there, meaning that as “The Big Parade” pulled in almost $5 million in domestic ticket sales, it was seen in a variety of manners. Thankfully, this new Blu-ray release means cinephiles won’t ever again have to worry about compromised presentation.

“Blood,” executive produced by Oscar winner Sam Mendes, is an achingly familiar cops-and-family-lineage thriller, in which Joe and Chrissie Fairburn (Paul Bettany and Stephen Graham) endeavor to solve a shocking murder in a small British town where they live in the shadow of their tough-as-nails dad Lenny (Brian Cox), the ex-police chief. When a suspect’s interrogation spins violently out of control, the brothers have to cope with the fallout, and their compromised position arouses the suspicions of colleague Mark Seymour (Mark Strong), hellbent on the truth. Director Nick Murphy wrings much atmosphere out of the chilly grey landscape, and the performances here are certainly well invested. But “Blood” unfolds in such stodgy, straightforward fashion, and covers such entirely known terrain, as to rate this crime drama worthy of a “skip” except for all but the most devoted of its actors’ fans. 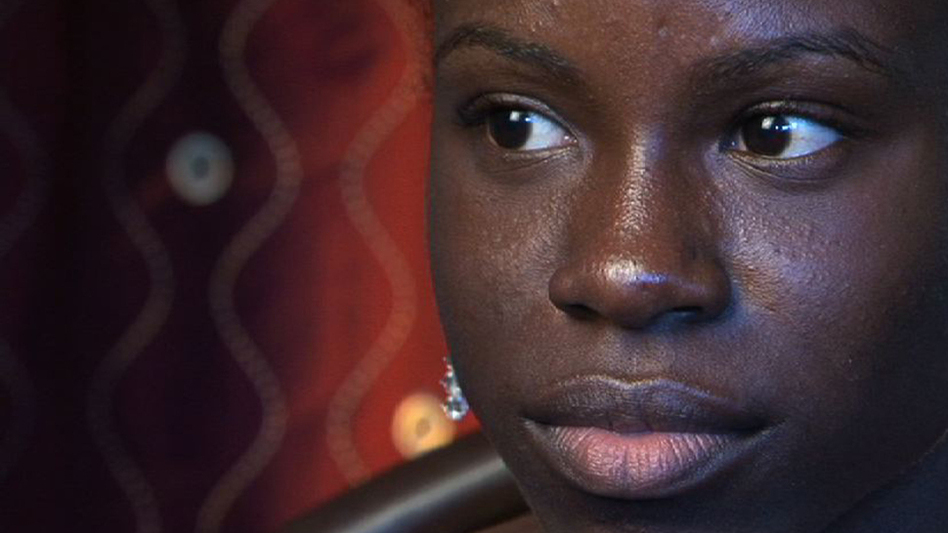 On the documentary front, meanwhile, though it’s a different film entirely than Chris Rock’s “Good Hair,” the equally fascinating “Dark Girls” offers up a somewhat similar and controversial look behind a topic in the African-American community that rarely gets any mainstream media play. In this case, it’s the prejudices that dark-skinned women face throughout the world, even within minority populations. Directors Bill Duke and D. Channsin Berry explore some of the roots of racism, classism and wounded self-esteem in this interesting, briskly paced nonfiction effort, which finds its strength in the shared personal personal stories of its many subjects. In a world where too many films leave scarcely a mark, “Dark Girls” is definitely a conversation starter — and that’s a good thing.