“Thor: The Dark World” is simply Marvel’s most fun movie.

Way back when, Odin’s (Anthony Hopkins) father, Bor, supposedly annihilated a race called the Dark Elves, thwarting their attempt to shroud the universe in darkness using a weapon called the Aether. Trouble is, the leader of the Dark Elves, Malekith (Christopher Eccleston), and a few cohorts abandoned their race mid-fight and managed to escape so they could get another chance to see their plan through in the future. In present day, about two years after the events of “Thor,” Thor is reveling in the success of his efforts to bring peace to the Nine Realms. However, before the Asgardians can enjoy this universal accord, the Nine Realms align, portals open, and the Dark Elves return.

“Thor: The Dark World” is easily one of Marvel’s most entertaining films. It’s got action, adventure, heart and some of the best superhero movie comedy. There are some logic issues, but the film is such a joy and thrill that the pleasure of the illusion leaves no room for misgivings.

Similar to the first “Thor,” the opening sequence in the sequel is absolutely stunning. “The Dark World” opens with that battle between Bor’s forces and Malekith’s Dark Elves and even though the combat is exciting and visceral, it’s the Dark Elves themselves that command the visuals. The design of the brigade of warriors is wildly appealing overall, but it’s their bold and rather eerie masks that sell them as a particularly vicious threat. Every single second featuring this foe could make for a wall-worthy freeze frame – particularly the renderings that play over the end credits.

Even though it’s sad to see the Elves drift off to sleep, the immensely successful humor in the next few sequences maintains the established momentum. Whether you’re into superhero movies or not, and whether you’ve got extensive knowledge of the film’s source material or not, “Thor: The Dark World” has something for everyone simply because it’s so well paced and funny. Will Thor’s goal of uniting the Nine Realms mean anything to those with no knowledge of the character beyond the films? Probably not, but a short sequence on Vanaheim is an absolute thrill because the comedic timing is so on point. Of course the quality of the action and performances are key, too, but it’s the universality of the comedy that rocks the ability to pull in any and every viewer more so than the film’s vast variety of other successful elements.

Back on Earth, Kat Dennings’ Darcy is the queen of the comedy. Just about every line of dialogue that comes out of her mouth earns a laugh. The humor is definitely in the writing, but Dennings excels more than most thanks to her pitch perfect delivery and timing. There’s one plot point centered on Darcy towards the tail end of the film that should feel too forced and familiar, but because it comes with such an amusing visual gag, it works.

Per usual, Loki (Tom Hiddleston) is quite the charmer on Asgard. Even though he butts heads with Odin and is confined to a small cell, he’s still full of obnoxious quips, each one hitting harder than the next. There’s one scene in particular that’s a guaranteed winner during which he uses his ability to turn into any character he pleases to earn the biggest laugh of the film. What makes Loki even more of a standout in “Thor: The Dark World” is the glimpse of his more vulnerable side. Without giving too much away, you do get the opportunity to see what Loki’s like when he can no longer maintain that cocky façade, and despite all the terrible things he’s done in the past, seeing him robbed of his usual playfulness is truly upsetting.

Thor himself is a curious case. The film’s secondary characters are so outside-the-box that, odds are, you’ll walk out holding on to the memories of them rather than Thor’s familiar saves-the-day approach. However, that in no way reflects the quality of Hemsworth’s performance. The guy is Thor. He can just stand there in that suit, holding the hammer and you believe him; it’s just that he needs to function as the rock whereas those around him can go a little bigger. On the other hand, Hemsworth does deliver a string of particularly memorable gags relating to the fact that Thor is essentially an alien on Earth. Again, without spoiling the details, just imagine Thor doing any typical daily task. Because it’s Thor, even the most mundane chore becomes amusing.

And don’t think “Thor: The Dark World” is all about the laughs. The action in this film is centered around one of the most inventive, fresh-feeling scenarios in any superhero film. When the Nine Realms align, portals open. Just think of the possibilities as both the narrative and the connection between the Realms intensify. These are action sequences you’ve truly never seen before. Director Alan Taylor and director of photography Kramer Morgenthau deserve a great deal of credit here because maintaining the audience’s bearings in this scenario is an unimaginable challenge. There are a lot of people and places in play throughout, but in the grand finale in particular, it’s really quite the accomplishment that it’s so easy to keep tabs on where all the key characters are and with whom they’re fighting.

Yet another top-notch element of “Thor: The Dark World” is its respect for mass death. As we’ve seen time and time again, cities are destroyed, but we hear nothing about the incalculable amount of loss. Not the case in “Thor: The Dark World.” In fact, one of the most beautiful sequences in the film involves a post-attack mourning ritual that’s both visually stunning and exceptionally moving.

“Thor: The Dark World” is one of those films that sends you on your way desperately trying to pick and announce your favorite part. Even beyond the ones mentioned here there’s Frigga’s (Rene Russo) fight sequence, Adewale Akinnuoye-Agbaje’s vicious monster, Idris Elba’s appropriately beefed-up role, this fascinating bone crushing Dark Elf weapon, and so much more. Maybe it is the lamest coincidence ever that Jane just so happened to get her hands on a certain something that brings Thor back to Earth as soon as the Nine Realms align, but who cares? “Thor: The Dark World” earns the right to run with that and any other logic issue you find purely because it’s just such a good time. 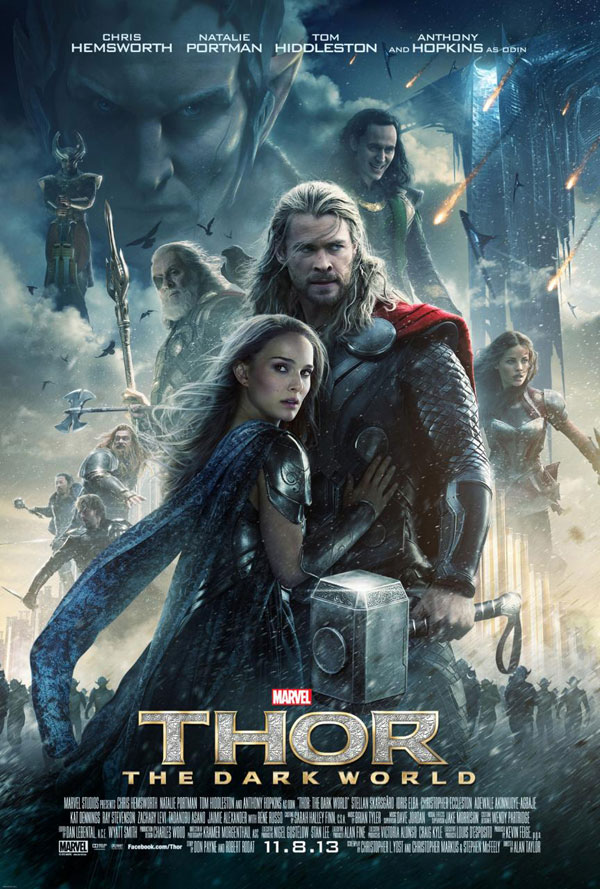