‘Anchorman’ fans can start dusting off their red blazers, as EPIX and Paramount Pictures are holding a nationwide search for the next Ron Burgundy. The premium television network and the distributor of the anticipated sequel, ‘Anchorman 2: The Legend Continues,’ are working as joint venture partners to give a lucky winner the opportunity of a lifetime. The winner will act as a news anchor on December 15 for the EPIX network, and report from the follow-up’s New York City red carpet.

Fans can audition online through the contest’s official website, beginning on Thursday. They can watch the “how to submit” video from Channel 4 News Team member Champ Kind (David Koechner). Fans can upload a 15-second audition video via Instagram, using the hastag #IAmRonBurgundy, and use the social networking tools on the contest’s website to campaign for votes. The person who receives the most votes by December 1 will become one of the contest’s ten finalists.

The remaining nine finalists will be selected from local promotions that will be held Thanksgiving weekend across America. The Channel 4 News set will be on-sit in shopping malls in major cities.

Fans will have the chance to create a “screen test” video and share their video with friends via social media. The top local finalists will be selected by a local television news anchor in each market. The Channel 4 News set will be on-site on Black Friday, November 29, for screen tests in the following locations: New York City–AMC Lincoln Square; Los Angeles–Westfield Century City; Dallas–Stonebriar Centre; Seattle–Northgate Mall; and St. Louis-Chesterfield Mall. The newsteam will also be on-site on November 30, in the following locations: Atlanta–Mall of Georgia; Denver-Cherry Creek Shopping Center; Philadelphia/Cherry Hill, NJ–Cherry Hill Mall; and San Diego–UTC Westfield Shopping Center. The top ten finalists will be featured on the contest’s website, beginning December 4. From the finalists, select cast and crew from ‘Anchorman 2: The Legend Continues’ will personally choose the Grand Prize winner, who will be announced on December 7 on the website. The Grand Prize winner and nine finalists will also receive a Sony Playstation 3 and a one-year digital subscription to EPIX.

Paramount Pictures has released the following synopsis for ‘Anchorman 2: The Legend Continues,’ which will hit theaters on December 20:

With the 70’s behind him, San Diego’s top rated newsman, Ron Burgundy (Will Ferrell), returns to the news desk in ‘Anchorman 2: The Legend Continues.’ Also back for more are Ron’s co-anchor and wife, Veronica Corningstone (Christina Applegate), weather man Brick Tamland (Steve Carell), man on the street reporter Brian Fantana (Paul Rudd) and sports guy Champ Kind (David Koechner)-all of whom won’t make it easy to stay classy…while taking New York and the nation’s first 24-hour news channel by storm. Produced by Judd Apatow, Will Ferrell and Adam McKay. Written by Will Ferrell and Adam McKay. Directed by Adam McKay. 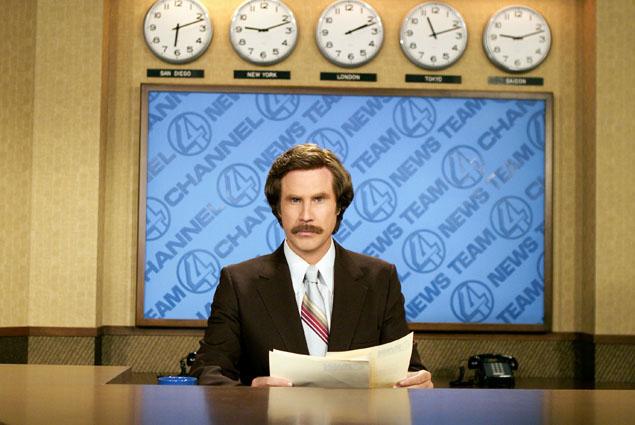