Determinedly fighting to achieve your goals, and stopping at nothing to overtake the obstacles that threaten your success, are strong motivations that continuously help the strong survive. Actor Vin Diesel and writer-director David Twohy are prime examples of this, as they reunited for last fall’s ‘Riddick,’ the third entry in their successful sci-fi film franchise. The two did whatever it took to continuing adapting sequels based on the video game series, and showcase the title anti-hero’s continued drive to survive. One of the other stars in the series’ third entry, Nolan Funk, who plays the rare caring mercenaries in the film, is an up-and-coming actor who proves that with his dedication to his his characters, he can surely emulate Diesel’s cinematic accomplishments.

‘Riddick’ follows the title character (Vin Diesel), who has been left for dead on a sun-scorched planet that appears to be lifeless. But he soon finds himself fighting for survival against alien predators that more lethal than any human he’s encountered. The only way off is for Riddick to activate an emergency beacon and alert mercenaries who rapidly descend to the planet in search of their bounty.

The first ship to arrive carries a new breed of mercenaries, which are increasingly more lethal and violent, while the second is captained by a man whose pursuit of Riddick is more personal. With a storm on the horizon that no one could survive, his hunters won’t leave the planet without killing Riddick. One of the mercenary teams is led by Santana (Jordi Mollà), who considers his youngest mercenary, the religious and empathetic Luna (Funk), to be his good luck charm in the fight against Riddick.

Funk generously took the time recently to talk about filming ‘Riddick,’ as well as his role of Ryan in last summer’s independent thriller, ‘The Canyons,’ over the phone. Among other things, the actor discussed he was drawn to the character of Luna in ‘Riddick’ because not only has he wanted to star in an action film since he was young, but he also wanted to work with Diesel and Twohy, who he thinks are both talented; how he’s grateful that fans of the ‘Riddick’ series are still supporting the franchise, even 14 years after the series’ first film, ‘Pitch Black’ was released; and how he enjoys making both independent and studio films, as it’s nice not to over-think his acting choices during the limited shooting schedule of smaller films, but how he also appreciates the time and luxury of getting to do a big budget movie.

ShockYa (SY): You starred as Luna in the action-sci-fi-thriller, ‘Riddick.’ What was it about the character and the script overall that attracted you to the role?

Nolan Funk (NF): Well, I had always wanted to do an action film, ever since I was a kid. Also, getting to work with Vin, who’s one of the biggest movie stars in the world, was great-I think he’s really talented. So it was exciting for me to get to know that I was going to be able to work with him, as well as the director, David Twohy.

I thought ‘Pitch Black’ was a really creative and pioneering film for the time it came out (2000). So I was happy we were returning to that style, but also knowing that it would be updated with the special effects. I thought it was such a cool concept; in the first 25 minutes of this film, it’s man versus nature. So I knew I was going to be able to learn a lot, working with Vin.

With the role of Luna, I get to play more of a villainous character. He’s the embodiment of a genuine American soldier who has these strong beliefs. He’s signed up to be in this world. I equated it to a lot of our soldiers who sign up to serve in Afghanistan or Iraq, and then they get there, and they ask, “What is this?” I knew that was a journey I was going to have to take on playing Luna. So the chance to play an interesting character, and also be a part of that ‘Pitch Black’ world, was a great idea.

SY: Speaking of Vin, he reprised his role of the title character in the series’ second sequel. What was the process of working with him like on the set?

NF: It was awesome. I learned a lot, and I got to watch how he worked. He also really took the time to make sure that I felt real, and really in my character. I ran a lot of my backstory by him, and he was excited to know that I was taking the role seriously.

Vin was awesome. He really made a point to work with me. They all called me The Kid on set and teased me. But at the end of the day, it was a really great group of people. We had a lot of fun.

SY: Like you mentioned earlier, you were also looking forward to acting in ‘Riddick’ because of it’s action sequences. What was that overall experience like for you, particularly working on the sequences with Vin?

NF: I was upset I wasn’t able to ride one of the levitating motorcycles (called “hogs”) on the set. I also wish I got to do a little more shooting, but it was awesome and exciting. It’s an exciting world to be a part of. I had all the training, so it was fun.

NF: David knows the world so well. He has a really great sense of humor, and also takes it seriously. I think he and Vin are a really great team, which shows in the fact that they’ve done three of these movies together. He was great. He teased me and called me The Kid.

I felt like he wanted everyone to be great in the movie. So he made sure to check in with everybody to make sure their performances were on track. So that’s why I think we had a great film.

SY: ‘Riddick’ was successful at the worldwide box office when it premiered in September in theaters. What does it mean to you that fans embraced the film? What types of reactions did you receive from fans after the movie was released?

NF: Well, it means a lot. The truth is, the fans make you, and I’m aware of that. So I’m definitely grateful that we have that support, and there’s still a demand for these movies.

NF: Well, I think the extended ending, and all the differences you can get from the director’s cut, are pretty cool. I also think its an entertaining sci-fi action film. It’s fun, and the effects are cool.

SY: Besides starring in ‘Riddick’ last year, you also played Ryan in the thriller, ‘The Canyons,’ which had an extremely lower budget.

NF: Yeah, it was the total opposite!

SY: So what was your overall experience of working on ‘The Canyons,’ especially since it was a low-budget, independent film, as compared to a bigger budget studio film like ‘Riddick?’

What was exciting about making ‘The Canyons’ is that it was being made guerrilla-style. I’m a big fan of (the film’s screenwriter) Bret Easton Ellis, so I would definitely like to do something with him again.

Obviously, it couldn’t be a more opposite experience. On ‘Riddick,’ we had three months, whereas on ‘The Canyons,’ we had less than 30 days. So it’s different when you’re filming a scene, and you have five minutes to do a take because we don’t have a permit. (laughs) Or we would have locations for only a limited amount of time.

Also, working with (Lindsay) Lohan, where you’re being followed, automatically brings all this press. That was very different from ‘Riddick,’ for which we were on location in Montreal, which is an amazing city that I love. We had an incredible crew who spoke French. Everything was also longer and much more thought out.

That’s very different from ‘The Canyons,’ where I was painting this picture of a character who’s not very likable. I don’t think he was very easy for a lot of people to watch. He was vulnerable, but also very deceiving in a way. Doing something like that is always a bold move as an actor. Having done a lot of commercial things in the past couple years, I wanted to do the quintessential independent film. That’s the experience I got doing ‘The Canyons.’ So I’m very grateful for that.

SY: Now that you’ve starred in a bigger budget film with ‘Riddick’ and an independent movie with ‘The Canyons,’ do you have a preference of acting in either one? Or would you like to continue to appear in both types of films in the future?

NF: I don’t really have a preference. I just want to act and tell stories. So hopefully as I develop as an artist, and also move more into producing, writing and directing, I think the gift of actually having a film get made is one of the greatest you could have as an artist.

For me, there’s something nice about not having time to over think or overshoot something. But there’s also something amazing about having the luxury of getting to do a big movie. So I think I’m just open right now. I want to work with interesting filmmakers who have strong visions. I love what I do, and I’m lucky I get to do it.

SY: Besides appearing in ‘Riddick’ and ‘The Canyons’ last year, you also had a recurring role as Collin Jennings on MTV’s romance comedy drama series, ‘Awkward,’ and also portrayed Hunter Clarington on four episodes of ‘Glee.’ What is it about television that you enjoy so much? 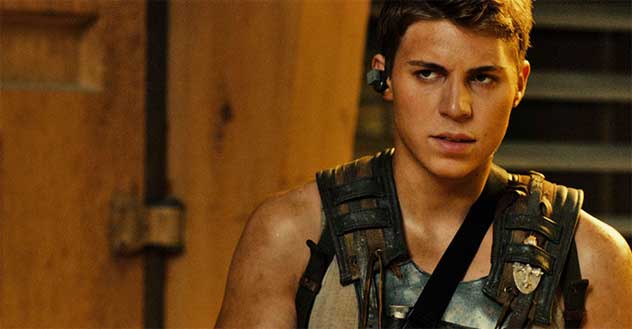