“Jack Ryan: Shadow Recruit” focuses on the Tom Clancy-created character, Jack Ryan (Chris Pine), a CIA analyst who’s suddenly made operational after coming across hidden files suggesting a Russian oligarch is about to unleash a devastating financial attack on the United States. As the most knowledgeable person on the case, Jack’s superior, William Harper (Kevin Costner), decides he’s the man for the job and sends Jack on his first field assignment to Moscow where he’s expected to uncover the details of the terrorist plot before Kenneth Branagh’s Viktor Cherevin can topple the economy.

Oddly enough, more happens to Jack in the 15 minutes prior to everything in that synopsis. We meet a young Jack in London where his studies are interrupted by the 9/11 attacks. He’s inspired to join the Marines and becomes an all-star solider until his helicopter is shot down, landing him in rehab for months. His doctor-in-training, Cathy Muller (Keira Knightley), motivates him to suck it up and get back on his feet, and that’s when Costner’s Harper moves in, waiting until the time is right and then recruiting Jack for the CIA. Now that’s a movie. The script doesn’t give these life-changing events much time to breathe, but based on this sampling, had the film chronicled the ups and downs of Jack’s career prior to becoming an analyst, there would have been far more heart and meaning to the experience.

But clearly that’s not the case and we’re left with a confusing and often unjustified plot progression. First off, it’s important to know that Jack Ryan isn’t James Bond or Jason Bourne. He’s an analyst. He isn’t out to save the world one fistfight at a time. He’s trying to save the world by conducting an audit, and it’s as dull as it sounds. On the surface, Cherevin’s plot to collapse the dollar is intriguing, but when we get down to the nitty gritty, essentially down to Jack’s world, it’s just too tough to follow along. Suspense peaks when you find out what Cherevin is capable of, but then while Jack is trying to stop him, it’s all talk and keyboard banging, very little of which registers, so that initial suspense dies out right along with your patience.

Another thrill-killer is the fact that you never doubt Jack. He wows with his intellect, but the most compelling material is when you see the genius crack, and almost all of those moments are crammed into the first act of the film. The characters talk about Jack’s inexperience, but never once do you fear that it’ll get the better of him and possibly cost him his life, which is unfortunate because when Pine is tasked with showing off a combination of confidence and vulnerability, he nails it.

There’s one particularly brilliant fight sequence between Pine and Nonso Anozie that isn’t just above and beyond due to combat choreography, but also because there’s character development in the mix, too. Here, Jack is solidified as a capable operative, but also one with weaknesses. Whereas you should go through the rest of the film wondering when Jack’s mid-fight luck and wit will run out, that concept is totally abandoned and replaced with someone with sky-high confidence, following premeditated instructions and acting like a hero well before he’s earned the title.

In fact, there actually isn’t a single character in “Jack Ryan: Shadow Recruit” that earns his or her title, or the right to be called a fully formed character for that matter. Knightley’s Cathy had a shot, but Cathy and Jack’s entire relationship leans on tacky dialogue and totally unrealistic displays of warmth. But the worst of it is when Cathy randomly joins team CIA as though it’s totally plausible that an average citizen would be permitted to take part in a top-secret effort to thwart a terrorist attack and manage to charm the target without an ounce of apprehension. Poor Costner has it even worse because there really is no point to Harper. He and Jack don’t seem to share much of an emotional relationship and his involvement in Moscow does nothing to move the narrative forward. He might as well have been an anonymous voice on the phone feeding Jack instructions.

And then we have Branagh’s villain, Cherevin. There’s little to no reason to describe him beyond that because that’s all he is, you’re typical villain. His motivations aren’t convincing, his weaknesses are literally spelled out and he doesn’t even do anything besides scowl in his office and at a dinner table. The wheels of his plan are already in motion by the time we meet Cherevin so his only responsibility is to keep Jack from screwing anything up and that isn’t half as cinematic as fighting to achieve a goal.

Branagh falls quite short when it comes to directing the film, too. The large majority of “Jack Ryan’s” problems are in the script, but Branagh also has a distractingly tough time stringing together meaningful scene transitions and makes a couple of strange choices in terms of shot composition. At one point in the film, Jack leans over a man at a work station to analyze what’s on his computer screen and instead of giving us access to Jack’s face, Branagh opts to cover the moment from the side, so all we can see is Pine’s bicep. And then there’s a moment when he shows Cherevin strutting down a walkway wearing his sunglasses with two other beefy men donning shades on either side of him – because that wouldn’t raise some public concern.

“Jack Ryan: Shadow Recruit” could have gotten away with quite a bit had it not been for the abundance of plot holes. Pine didn’t get enough to work with here, but there’s definitely something magnetizing about him – and it’s not just that pretty face. The most compelling scenes of the film, whether they’re action or talk-based, are the ones where you see Jack think. Pine gets slammed with abysmal scenes like one towards the tail end of the film where Jack jumps from computer to computer and solves the whole mystery without a single explanation and without ever giving you access to what’s going on inside his head, and there’s just nothing he can do about it. However, when he does get something he can turn into a robust, meaningful character detail, like certain facial expressions and reactions in the bathroom fight sequence, he does just that and then some. If only there had been more opportunities like that.

“Jack Ryan” isn’t a total loss, but it’s especially disappointing because it could have been so much better. This was a great chance to take the typical spy movie we’re used to and churn out something that offers a similar thrill, but with a fresh, thoughtful spin via Jack’s intellect. But in order for that to have happened, we needed a compelling mystery that we could be part of, not one that we could watch Jack solve himself. 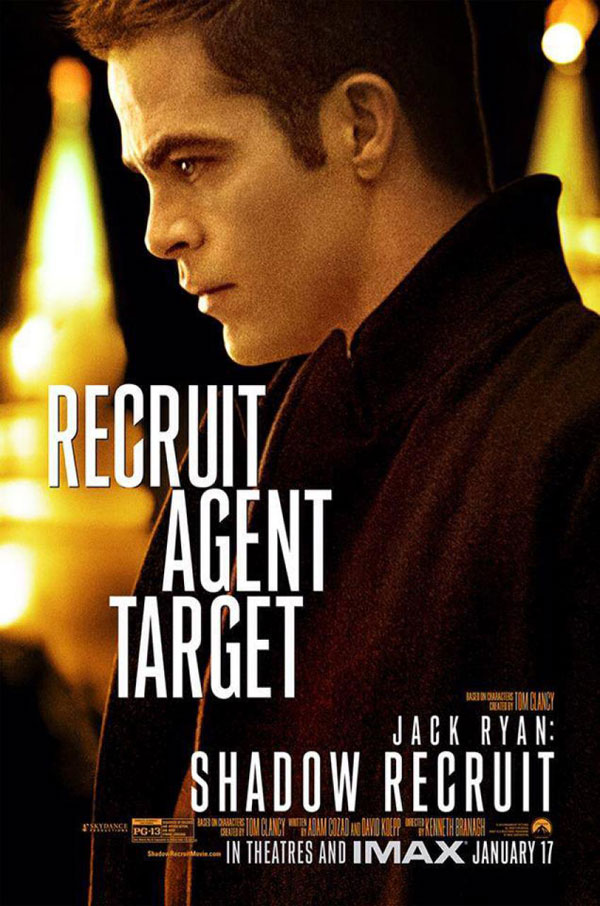