Jennifer Aniston is arguably the most famous actress in Hollywood today. You wouldn’t think she would need to appear in what comes across as a vanity production, although perhaps she was in the mood expand her depth by showing the public that she can be more than she was as a comic figure in the two episodes of “Horrible Bosses.”  Aniston does show promise in a serious role as Claire Simmons, in chronic pain and the only one in the sensitivity group chaired by Annette (Felicity Huffman) who will speak her mind.  Not for her the clichés that are obligatory after the suicide death of Nina (Anna Kendrick), one of the members of the support group.  No “Our hopes and our prayers are with Nina’s husband, Roy (Sam Worthington).  Instead, Claire lashes out with a “way to go, Nina,” after a diatribe on the unusual way that Nina’s body was discovered in Acapulco.

As a withdrawn, middle-aged woman whose husband left her after putting up with negativity for too long, Claire is addicted to Percocet for her pain, a drug that she gets by hook or crook.  In one scene she shows up at her doctor’s office without a referral but manages to get a prescription from her by promising to write a recommendation for the doctor’s daughter, who has applied to UCLA.  In another, she is driven to Tijuana by her loyal housekeeper, Silvana (Adriana Barraza), a woman always by her side and is not Claire’s only friend (unless you count the hunky gardener to shows up now and then to service her).

Though this is Aniston’s movie, Adriana Barraza, so wonderful as Amelia in Alejandro Gonzaléz Iñárritu’s “Babel,” in my view the best film of 2006, knocks out the movie’s most comic scene as a woman who, like others in her boss’s life, wonders why she didn’t leave her rich employer months earlier.

Scenes that find Claire hallucinating or dreaming about poor Nina (Anna Kendrick) are too brief, the film more like a showcase for Aniston’s breadth than one which could actually evoke deep audience sympathy, 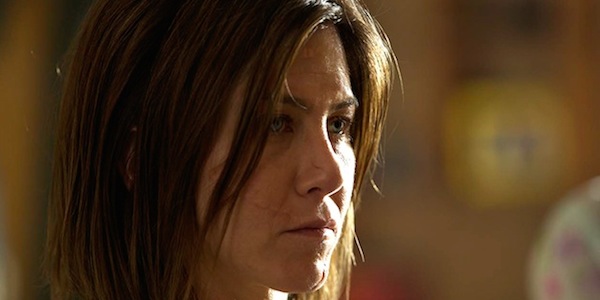