Exclusive: Anton Yelchin Talks on the Set of Burying the Ex

In director Joe Dante’s “Burying the Ex,” Anton Yelchin stars as Max, a twentysomething caught between trying to fully extricate himself from one relationship that has run its course, with the clingy and possessive Evelyn (Ashley Greene), and find stability and success in his relationship with new girlfriend Olivia (Alexandra Daddario). That sounds like a familiar scenario, both on screen and in real life. The twist, though? Evelyn has died and become reanimated as a zombie, which she merely takes as a sign that her love for Max is a star-crossed-and-forever type of thing. Prior to it wrapping up principal photography just before Christmas, Brent Simon had a chance to visit the film’s Los Angeles set for ShockYa, observe a day’s shooting and talk with the cast and crew about their take on the material. His conversation with Yelchin about Dante, “Burying the Ex” and the bracing experience of getting into the editing room on a recent movie is excerpted below:

ShockYa: “Burying the Ex” seems to be following a trend of zombie movies… but (screenwriter Alan Trezza) did a short film with the same conceit six years ago. Both as it applies to this film, but also your career in general, how mindful are you of topicality, of trends and what’s popular, and how much do you have to guard against that if at all in deciding which material to tackle?

Anton Yelchin: Well, I don’t look at that, that’s not how I judge things. If I see that people seem to be interested in a certain thing, and this is an interesting way to talk about a certain thing in which people are interested, that’s a benefit for the film, you know? But it’s very far from the way I make decisions. If a film seemed completely out of place presently, but was (still) fascinating to me, I would do that film. At the same time I think it’s detrimental when it’s obvious that something is just cashing in, which Hollywood has always done. I’ve watched a lot of Universal horror pictures, and they cashed in on the Karloff/Lugosi thing like crazy — even if they had one fucking scene they’d call it a Karloff/Lugosi picture. So I don’t pay attention to it that much. And I’m not that aware of a lot of trends, oftentimes. I find that I’m not usually the target audience for a lot of trends. Like “The Walking Dead” I hear is great, I know that’s about zombies, but I’ve never seen it. To me it’s mostly about the filmmakers, actors, obviously the material — and what I think theoretically and ideologically where the movie is positioned, things like that. And then, if it seems like something that a lot of people might want to see, great, but if not then it doesn’t matter to me.

ShockYa: Joe Dante is a distinctive filmmaker. With many of his films, I can see the alternate version of that movie that could have been made for more money, and with probably more special effects, less focus on the characters, less quirkiness and attention to detail. What were your impressions of him before working with him, and how has that intersected with the experience you’ve had on set?

AY: Yeah, for me the biggest thing I was excited about on this film was Joe, because I thought the screenplay was very self-conscious, very self-reflexive and very much concerned with its own genre. The fact that Joe was making it, and the fact that that’s something Joe is interested in as a filmmaker, was very exciting. I mean, I have incredible respect for Joe, and I’ve been having a really great time working with him. And to be honest his presence in my life has incredibly enriched my film knowledge, because he has an encyclopedic knowledge of cinema. Even though I was kind of obsessive beforehand about trying to see a lot of films, it’s even more [the case] now. And I’m grateful that Joe has come into my life at this time, because my desire to see films and understand films and consider construction and the formalism of films have evolved over the last couple years and is probably stronger now than it has ever been before. So there’s that part of my experience with him that I’m grateful for, but I also feel like — and I don’t know if he would agree with me or not — I see how Joe’s (Roger) Corman background influences his filmmaking. It’s really fascinating, because I see how he looks at what we get and sees what he’s going to use and how to do it. There’s a quality of knowing what you need and how to use what you’re getting — not just shooting endlessly, because you can’t do that, but literally looking at the frame and knowing what part of it is going to be in your film. I had the fortune last year of being in the editing room on a film I worked on, and the editing room is the most magical and simultaneously hellish place, because you can make a film out of nothing or you can take good shit and just turn it into bad shit. So being with a filmmaker that I believe [has a sense of that in his head already] is amazing. I mean, Corman would give these filmmakers short ends to make their films, which seems like such incredible training. Even now, when I think about how I want to (some day) make a film, I think (of Joe’s skill set) because there’s less and less money these days it’s split between huge productions and much, much smaller movies, and so you have to think much more practically — you can’t just shoot endless coverage, and do endless takes.

ShockYa: That inspires a certain kind of creativity.

AY: Exactly, and I feel very inspired being around Joe, for that reason.

ShockYa: It doesn’t sound like the actors really had to go to “zombie movie school” for this, it doesn’t make a lot of choices about fast zombies versus slow zombies — it’s more rooted in the relationship dynamics, it sounds like, based on my (conversation with screenwriter Alan Trezza). Tell me your character, Max.

AY: Yeah, and I think the action happens in the horror portions of the film, but a lot of the movie also has a screwball feel to it — so a lot of the scenes are more about the comedy of it, the comedy of having a girlfriend who wants to fuck you when she’s a zombie rather than some violent reactions, you know what I mean? The violence mostly happens in the climax, which is also part of the genre as well. A lot of this is a comedy. And Evelyn is grotesque and disgusting, but simultaneously quite beautiful because Ashley is quite beautiful. It’s very odd, and that’s part of the comedy too — there’s an absurdist quality to a lot of the moments in the film, which I’ve liked and embraced.

ShockYa: When a film juggles disparate tones like that, do you have to hash things about differently beforehand or just trust implicitly in the director?

AY: I usually just try to first figure out what the most theoretically honest place the person would be in in a scene, and that helps with whatever actor bullshit I have do to do whatever I want to do. When I (first) know what a character’s journey is and what their goal is within a scene, what they’re going through, then I feel like by virtue of the genre you can take certain freedoms that you wouldn’t normally have in a regular drama. For instance, you can then play a weird joke at the end of a dramatic scene, really, like we’re doing now, because that’s the genre — there’s the horror element, the “oh shit” part of it, that’s played realistically, and then somehow you allow yourself to make a joke, but from that same place. You figure out how to add legitimacy to it. Here, for example, in certain scenes the dialogue is paced in a screwball mode, but you try to play it from as honest a place as possible. I tend to think about pace a lot. The last couple films I’ve done I feel like pace was really important.

ShockYa: You mentioned earlier being in the editing room on another film recently. How has that impacted — or is it impacting, still ongoing — your work, if at all? You’ve been working what seems like forever, since you were a young teenager, but you’re still only 24. And with these films over the last four years or so, as you’ve transitioned into adulthood, do you find that has changed your approach to acting?

AY: I don’t know if that’s changed my approach that much. What changes my approach is when I learn new things, and I have new influences and try to incorporate them into performances. But it does change my approach to how I think about what’s being accomplished. The editing room is a big teacher, and I’ve realized that you do five takes, maybe, and there’s a tendency to want a take to be really perfect. I know when I was younger if I didn’t perfection in a take or didn’t get to some place then I felt horrible about it. But you realize that really editing talent is about the talent of selecting special moments, and there may be something you’re doing that only the editor sees. …And what you think is important may still be — but the real moment that you need may be 30 frames before that. I had a thing happen recently where the crux of the last quarter of this character’s journey is based on this one scene. So I map out the journey, and the scene is so fundamental — everything that follows stems from this one scene. I see the final cut of the movie and that scene is gone, it’s not even in the film! But the film still works, and the arc still works. So it’s this weird thing — filmmaking is so weird, man.

NOTE: More on “Burying the Ex” will follow in the coming days, but check out these links for conversations with Alexandra Daddario (http://www.shockya.com/news/2013/12/30/exclusive-alexandra-daddario-talks-burying-the-ex/) and screenwriter Alan Trezza (http://www.shockya.com/news/2014/01/04/exclusive-screenwriter-alan-trezza-talks-burying-the-ex-joe-dante-zombies/). 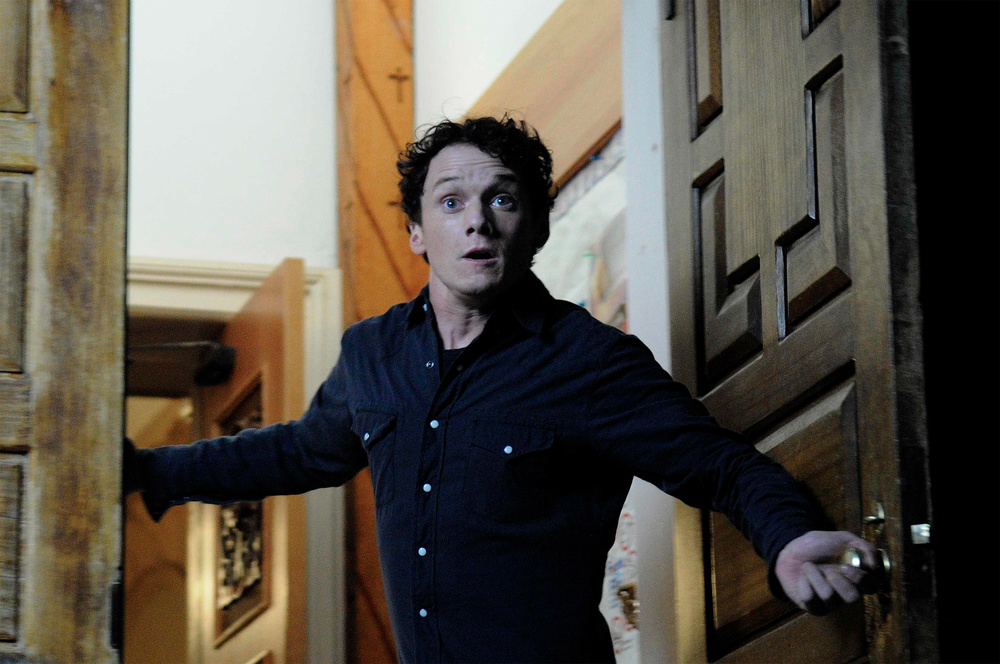