Guantanamo Bay is a topic that immediately brings images and themes to mind, and is certain to be controversial, regardless of where a given person falls on the political spectrum. Peter Sattler’s film Camp X-Ray is a look at one guard and the relationship she forms with a detainee, two people in impossibly different worlds living so close to each other and interacting on a daily basis. Sattler’s ambitious project is great food for thought, and though it might not be entirely realistic, it definitely tells a good story and has a lot to say.

Amy Cole (Kristen Stewart) is from a small town in Florida and enlists in the military as a way of getting out of her hometown and being a part of something important. When she arrives at Guantanamo Bay, she is exposed to the attitudes of the various prisoners and to the way in which they and the other guards respond to each other. One detainee (orders are never to call them prisoners since that would make them subject to the Geneva Convention) named Ali (Payman Maadi) is eager to talk to Cole, who he dubs “Blondie,” and one of their first conversations is about how the prison library does not have the seventh Harry Potter book. Though their initial talk ends in Ali hurling a cup full of his own feces at Cole, a common prank among detainees, it is clear that there is something between them that will only continue to build as the film goes on.

Casting Stewart is an intriguing decision, one sure to garner publicity for the usually less theatrical actress, whose past roles haven’t shown much in the way of acting talent. Here, her hair is pulled back into a bun, prohibiting her from her signature move of running her hands through her hair regularly, and she has the opportunity to get serious and show critics that she is capable of taking on a challenging role. Her performance is not terrific, but it does represent growth on her part, and her subdued, loyal demeanor helps make Cole a compelling main character whose transformed attitude about her situation gives rise to many of the film’s questions about ethics and morality.

Payman Maadi, who delivered a stirring turn in the Iranian Oscar-winning film A Separation, is Stewart’s foil, Ali. Shown praying in his home in the film’s opening moments and then hooded before being transported to Guantanamo, Ali has been a resident of Guantanamo for over a decade. As he and Cole get to know each other and Ali expresses that he has been told that he is innocent but will never be released because no country will have him, Cole asks him why he doesn’t behave to try to earn better treatment and living conditions. Ali responds that to do so would acknowledge that Cole and the guards have a right to lord over him, which they do not. Maadi’s English-language performance is heartfelt and endearing, and he does a superb job of humanizing his character.

Camp X-Ray includes a number of disturbing scenes and concepts, including Ali’s punishment for his prank: Guantanamo’s “frequent flier program,” which involves a detainee being moved from cell to cell every two hours for days on end to prevent him from getting any rest. Cole must also combat sexual discrimination from male officers, and a widespread aggression due to her favorable attitude towards Ali. While the closeness of the relationship between Cole and Ali might not actually occur in real life, this film’s story is a hard-hitting, effective one that haunts and resonates. 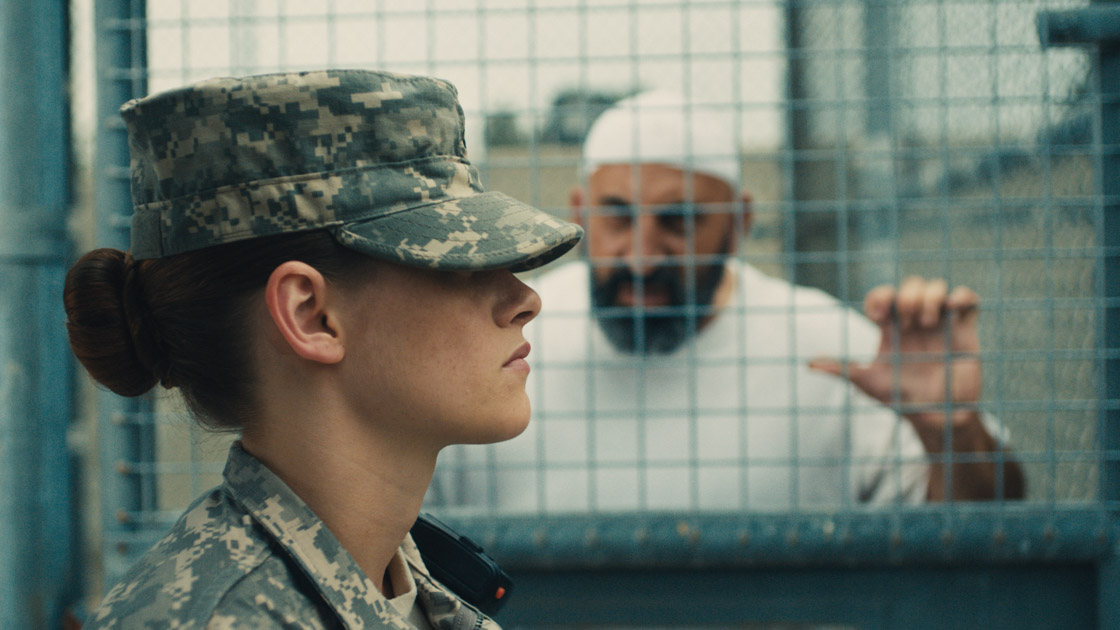