Filmed in front of live (though never shown) audiences over the course of three days during one of its 2012 stage runs, “Charlie Victor Romeo” deploys a small repertory company of actors playing the various roles of the pilots, co-pilots and other flight crew members grappling with six discrete disasters. The situations unfold at different lengths, and include incidents with icing, birds, bulkhead rupture, hydraulic system failure and other mechanical malfunctions.

Brief interstitial title cards provide relevant information about the type of aircraft in each scene, and the passengers and crew on board. Otherwise, the black-box staging of the material — familiar enough for anyone who’s ever seen any independent theater, but more importantly true to the origins of the material — provides a fixed, straight-on point-of-view of the cockpit, though with a couple camera angles and very occasional, tightly framed cutaways to the profiles of assisting, overheard air traffic controllers. It’s a very spare approach, but the telling suits the material. It forces a subjectivity upon the viewer that makes them create all the surrounding elements — the passengers and scrambling ground crew — in their mind.

The acting is (appropriately) clipped and professional, though not without small moments of humanity; the movie’s opening sequence includes some flirtation between pilot and stewardess. There’s profanity, too, understandably. The aviation jargon, meanwhile (“over-speed alarm,” “elevator control,” etcetera), summons forth memories of the panicked punch of television hit “ER,” which gave plenty of viewers their first real glimpse into the crisis reaction of frontline medical professionals. It’s considerable, this terminology, but since the scenarios are authentic it’s not distracting; the gist of all the problems in each event is always readily apparent.

For its theatrical incarnation, “Charlie Victor Romeo” is presented in 3-D, which seems counter-intuitive but offers an additional lever of experiential unease; it’s not for nothing that the film has traveled widely and played well at so many festivals, including AFI Fest, the New York Film Festival’s Convergence Program, and Copenhagen’s CPH: DOX, which explores the boundaries between fact and fiction. By using actual “black box” voice recording transcripts (only condensing some material for time, not changing any) and recreating these scenes of extreme duress, “Charlie Victor Romeo” doesn’t so much provide a snapshot of heroic professionalism (though there is a good pinch of that) as much as plumb the valley between human frailty and our remarkable capacity for disaster response. The result is a unique and unsettling film.

NOTE: In addition to its New York City engagements, “Charlie Victor Romeo” opens in Los Angeles on January 31 at the Downtown Independent. For more information, visit the movie’s eponymous website and/or Facebook page. 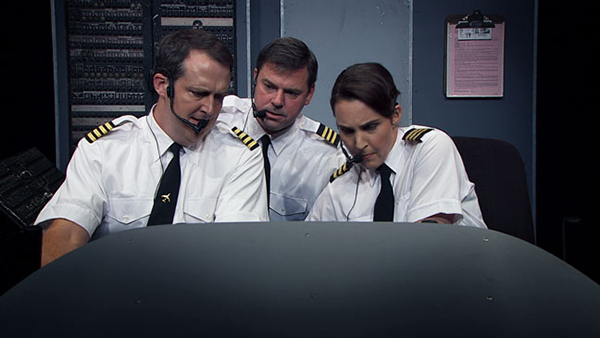