Every relationship reaches a certain moment when the dynamic between the two people, after slowly but steadily changing, reaches the point of no return. Whether or not the people decide to try to mend their connection, or let their bond go, most couples do reach that point of no return. That’s certainly the case with the new romantic comedy, ‘That Awkward Moment,’ from first-time feature film writer-director Tom Gormican. The film profoundly offers a rare but welcomed insight into mens’ perspectives of when they realize it’s time to fully make a commitment in their romantic relationships, and how they know when and how to tune out the distraction that slants their understanding of relationships. The movie also comically highlights the natural and quick friendship that formed between the three main stars as they prepared for their diverse roles.

‘That Awkward Moment’ follows three single best friends-book cover designers Jason (Zac Efron) and Daniel (Miles Teller) and Mikey (Michael B. Jordan), a doctor in his residency-who are living seemingly carefree lifestyles in New York City. After Mikey’s wife, Vera (Jessica Lucas), unexpectedly tells him she’s been cheating on him and wants a divorce, the three friends make a no commitment pact. Since they’re all finally single at the same time, they’ll forgo romantic relationships and instead concentrate on partying together and with as many women as possible.

However, the friends’ obligation to their agreement quickly begins to waver. Mikey begins having sex with Vera again, even though they aren’t any closer to rekindling their emotional bond than they were when she first revealed her affair. Jason also begins secretly dating an emerging novelist, Ellie (Imogen Poots), whom he met in a bar and subsequently designed a book cover for inadvertently. Daniel also covertly starts seeing his friend Chelsea (Mackenzie Davis), after the two spent countless nights trying to set each other up with other people. The three friends try to process how Jason and Daniel are now unexpectedly falling in love, while Mikey, who always believed in marrying young, is going through a break-up, without letting the changes in their attitudes affect their relationships with each other.

Gormican created a comical and heartfelt romantic comedy with an original and creative insight into the mindsets of the seemingly self-obsessed single men in their mid-20s, who are trying to have one last stint of fun before they truly have to settle down and accept responsibility for their actions. With Jason, Daniel and Mikey have all put their main focus into finding success in their careers, as a way to find some kind of stability during the unpredictability of becoming an adult after college, the screenwriter crafted a relatable and amusing story of young adults becoming disillusioned with progressing towards a conventional path.

When Jason and Daniel see that even Mikey, who wanted to be on track in all aspects of his life as early as possible, can’t maintain a lasting and deep emotional connection, the three become disheartened. They all suddenly realize that following social norms can prevent you from being who you truly want to be.

Jason has unintentionally done some tactless things to his friends, such as being the one who initially instigated the pact with his friends and effectively making Daniel and Mikey hesitant to divulge their evolving romantic relationships. But Efron effortlessly showed how his character immaturely stays in his partying mindset, as he’s afraid of getting his feelings hurt.

Teller, meanwhile, subtly and wittily emphasizes Daniel’s fear of commitment, as he views being single as bolstering his status. The actor perfectly balances the character’s comfort at being a jerk in order to get what he wants with his hidden desire to love and be loved.

As the most sensitive of the group, Mikey isn’t afraid to openly reveal his emotions and desires, including his surprise of his wife leaving him. Jordan enthralling portrays the doctor as always aspiring to carry out his version of living the American dream. But he doesn’t come to realize that balancing a successful career with a prosperous marriage isn’t as easy as it’s portrayed to be.

The scribe-helmer’s genuine, amusing romantic comedy not only features a true showcase of the evolution of young adults, who realize that partying isn’t their top priority anymore after they form an instant romantic connection with someone, but also a captivating bond between Efron, Teller and Jordan. While ‘That Awkward Moment’ was shot on a short shooting schedule, the three actors formed a captivating, sincere bond with each other, which effortlessly translated well onto the screen. Though the three actors only met before filming began, and their characters have known each other for years, and witnessed the numerous romantic relationships all three have embarked on, their natural understanding of each other’s struggles and personalities effortlessly translated to the screen.

The three performers in the romantic comedy naturally portrayed their characters as being content in their lives in the beginning of the film. But over the course of the film, the actors realistically evolved their characters into realizing that having successful careers and prosperous friendships aren’t the only things that keep them happy; also having a true romantic connection with someone who loves you back is also just as meaningful. Between Gormican’s humorous chronicle of young men finally realizing they’ve naturally outgrown their partying lifestyle and truly want a meaningful bond with a woman, and the charismatic bond between the three main actors, ‘That Awkward Moment’s genuine life-altering self-discovery of what it really means to be happy and successful. 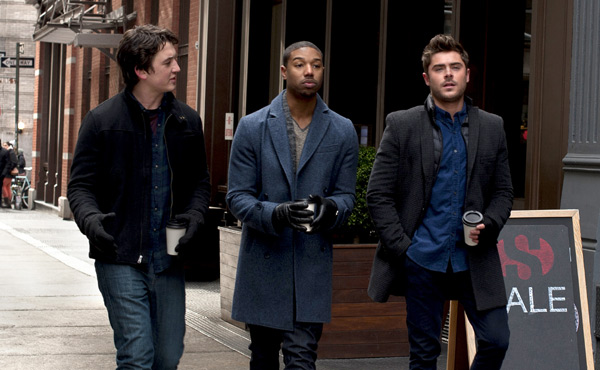