Documentaries about the great financial crisis of 2008 have been numerous, but “Hank: Five Years From the Brink” attempts to put a personal spin on the affair, providing a look at the matter from the point-of-view of embattled Treasury Secretary Henry Paulson. Directed by Joe Berlinger, the film offers up a humanizing and in many ways sympathetic portrait of the man, but such a free-pass airing and seeming endorsement for many of his decisions, as well as a lack of substantive exploration of their after-effects, that it’s vexing throughout and at times borderline noxious.

“Hank: Five Years From the Brink” unfolds chiefly as a decorated extended interview — with Paulson holding forth in his raspy, self-admitted monotone, with liberal gesticulations. The only other interviewee is Hank’s wife Wendy, and so the opening eight or 10 minutes of the movie sketches out a loving biography of the Illinois-raised, nature-loving Dartmouth University graduate, and his courtship of the Wellesley College student a couple years his junior. From there, the film charts Paulson’s professional life in mostly glowing terms — making partner at Goldman Sachs in 1982, then rising to COO in 1995 and eventually CEO in ’98.

After twice demurring when tapped to become Secretary of the Treasury, Paulson accepted the position in 2006. The bulk of the movie then charts the choppy waters of economic calamity, beginning with the sub-prime mortgage market collapse that started in Europe in the latter half of 2007. For three weeks in September of 2008, Paulson — along with Fed Chairman Ben Bernanke and President of the Federal Reserve Bank of New York Timothy Geithner — stood charged with preventing a total global financial collapse, by way of convincing bank CEOs, Congress and everyone else of unprecedented bailout packages totalling nearly $1 billion.

Anecdotes are few and far between herein (though Paulson does note that he believes the loud dry heaves from which he’s suffered throughout his life in moments of extreme tiredness and stress assisted in finally brokering a deal with Congress on the unpopular Troubled Asset Relief Program). But this isn’t a film of solid context and detail, either. “Hank” largely glosses over Paulson’s brief White House tenure in the 1970s — first as a staff assistant to the Assistant Secretary of Defense and then, from 1972 to ’73, as an assistant to John Ehrlichman — during which he would play a role in a 1971 bailout of Lockheed Martin. And his time at Goldman Sachs is described in only sunny, idealistic terms. While it paints him as a man of integrity not much concerned with money, the film doesn’t note that Paulson had to divest himself of $600 million worth of Goldman Sachs stock prior to becoming Treasury Secretary, so of course it doesn’t dare float a question about any potential conflict of interest.

More to the point, though, “Hank” has no stomach or intellect to ask questions of substance. When it comes to issues like Bear Stearns stockholders being paid $10 per share rather than the initially offered $2 through a Fed-brokered deal to prop up JP Morgan’s purchase of the troubled investment bank, or, later, a direct injection of hundreds of billions of dollars in capital rather than buying up toxic assets under TARP, the film lets Paulson kind of skate by. He explains these decisions in broad strokes, with a shrug. Letting his subject narrate his own story, Berlinger offers up a portrayal of a guy trying to manage, massage and mitigate Wall Street perception, above all else. This may or may not have been paramount in achieving economic stability (and there’s considerable evidence to suggest it was at least somewhat important), but some of the statements Paulson makes (“Complexity is the enemy of transparency, complexity is not a good thing in finance” and “None of us understood the extent of what we were dealing with”) without the benefit of any pushback or follow-up are rather galling.

Paulson tries to inoculate himself from criticism by noting that Wendy and his two children “weren’t fans” of the Bush administration prior to his accepting the cabinet position, but he also goes to significant lengths to de-politicize the financial crisis in both its lead-up and most tangled time, praising President Bush’s access and engagement, though in only the vaguest terms. “Hank” seems smitten with and overly deferential to Paulson — it doesn’t press him on the issues of tracking mechanisms or other enforcement measures for TARP, so when in the final five minutes of the film he derides multi-million-dollar CEO bonuses as exhibiting a “graceless lack of self-awareness”… well, yeah, sure. There’s that, I guess. Was there any reason to be surprised, given their well-catalogued behavior?

The Academy Award-nominated Berlinger (“Brother’s Keeper,” “Paradise Lost”) is a better filmmaker than he shows here. Working with cinematographer Bob Richman, Berlinger weirdly frames his film with an extended opening segment showcasing some of the single-setting interview set-up with Paulson, and he conspires with editor Brett Mason on a variety of ominous zooms in on the mouths of newscasters and various talking heads in the somber, portentous news footage interspersed with Paulson’s reminiscences. Goosing, dramatic music by Ian Honeyman doesn’t help much either, lacquered as it is in obvious emotional appeal.

Glass-half-fullers with an appetite for public affairs and political nonfiction programming may find intrigue in “Hank: Five Years From the Brink,” and reject the aforementioned criticisms as being not of Berlinger’s designated focus. There’s a measure of truth to that. But any film about the global financial crisis of 2008 that fails to seriously consider subsidized risk, the illegality of massive credit default swaps, echo-chamber thinking and, yes, lack of jail time for those who perpetrated this fraud is irresponsible at best and deleterious at worst. And that’s “Hank.”

NOTE: In addition to its Los Angeles premiere at the Laemmle NoHo7 and other theatrical engagements, “Hank: Five Years From the Brink” is currently available on Netflix. For more information, visit www.Hank5YearsFromTheBrink.com. 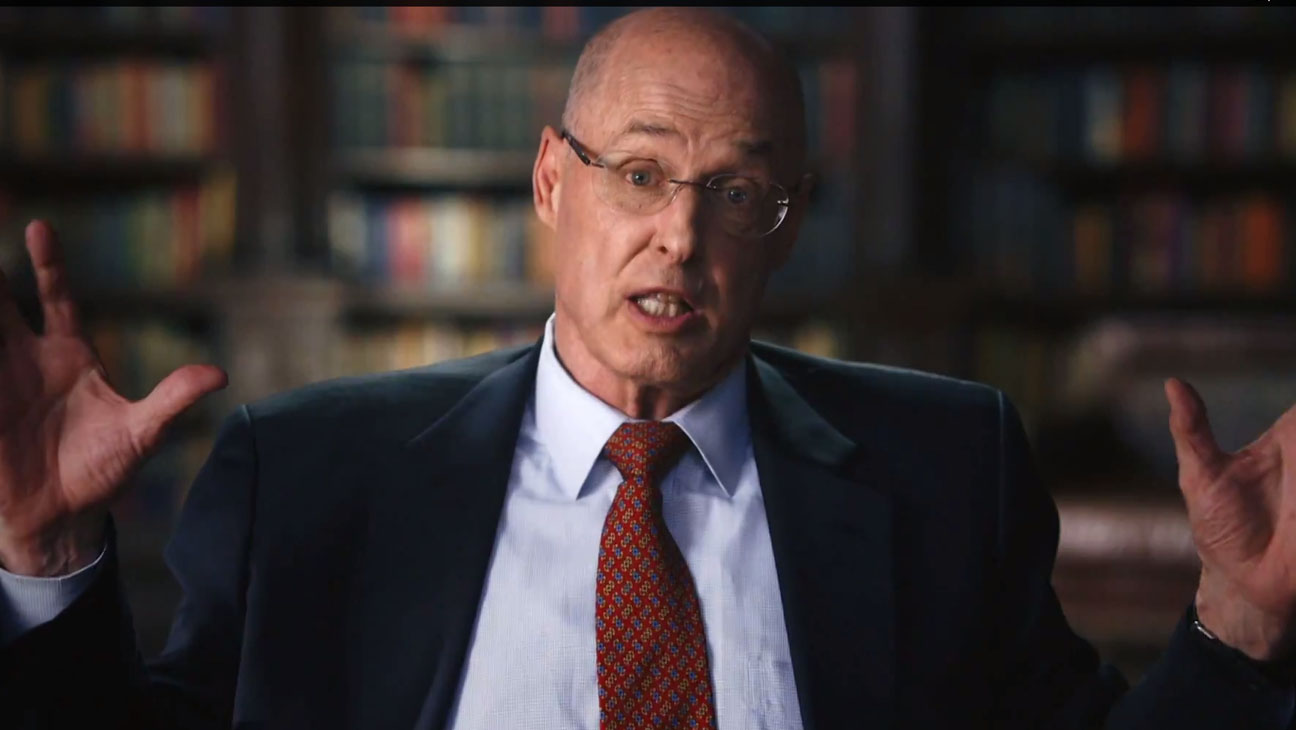