Diego Luna’s “Cesar Chavez” bears some weight courtesy of its true roots, but the abundance of information and lack of heart makes it feel more like a history lesson rather than a dynamic cinematic experience.

Michael Peña leads as the title character, a man who decides it’s time to dedicate his life to pursuing farm workers’ rights. With the help of Dolores Huerta (Rosario Dawson), Chavez forms the United Farm Workers labor union, rouses thousands across the state of California and initiates a strike for workers, specifically grape pickers in desperate need of better working conditions and increased wages. When wealthy grape-growers like John Malkovich’s Bogdanovitch refuse to come to terms with the UFW, not only must Chavez come up with innovative ways to convince farm owners to support their cause, but he also must uphold the UFW’s morale and support his wife (America Ferrera) and children during the trying times.

As someone who’s only vaguely familiar with Chavez’s exploits, admittedly, I had a lot to learn about the famed labor leader. “Cesar Chavez” does manage to get the basics across, identifying the major players, and pinpointing each side’s demands and motivations, but you can get all of that from Chavez’s Wikipedia page. Part of the reason you bring a true story to screen is so that moviegoers can live through an event that they can never undergo firsthand. But sadly, “Cesar Chavez” isn’t engrossing in the least. Rather than let you experience the story, the feature just tells it to you, a flaw that’s caused by all of the chief elements of the production – the performances, direction and the script.

Luna nor scribes Keir Pearson and Timothy J. Sexton offer any access to the characters. Considering Chavez is a strictly peaceful man and because settling these types of disagreements requires a great deal of negotiations, “Cesar Chavez” was bound to be exposition heavy. However, the trouble is, the abundance of speeches and conversations are so laden with details that for someone with little prior knowledge of the scenario, it’s impossible to digest it all because the facts aren’t presented in a genuine fashion. Had the film featured characters that felt like fully realized people that you could connect with, the delivery of information would have felt more natural, but instead, it’s as though they’re mere talking heads spitting facts at you and trying to keep up with it all is just too exhausting.

As much as we’d all like to think of ourselves as kind, caring and giving people, Chavez really went above and beyond, making countless personal sacrifices while fighting to make a difference for so many people. That’s the element that should have made this biopic inspiring, but it never manages to have that effect because the filmmakers’ representation of his selflessness is totally flat. Peña merely announces his agenda, puts on a stern, determined face, and that’s that. It’s always only about getting the details across and nothing more. There are little to no character reaction shots, no moments to breathe and assess the latest plot development, and also no clear beats to any of the scenes. Just as you want a beginning, middle and end for a full feature, you want individual scenes and sequences to have a semblance of the same, but when everything is driven by facts rather than emotion, it comes across as entirely one note.

Chavez’s relationship with his eldest son is meant to be a pivotal component of the film with a third act payoff, but all we get are a couple of cold conversations. They say their lines, the son sulks and that’s it. We know what they think about their strained relationship – they come right out and say it – but it’s impossible to care when you never get to experience how they feel. Chavez essentially has to choose between the UFW and his family. Having family in the equation should be an instant connecting factor, but it’s not because every single member of the family is just a one-dimensional representation of the real deal, and why should anyone expect to be able to relate to that?

The same issues plague Chavez’s fight for workers’ rights. He strikes, he marches, he fasts, but you never get that feel-good sports movie type of rise when the underdog thrives and takes a step closer to achieving his or her goal. There are a few action scenes chronicling protests gone wrong that bear a bit of a build, but otherwise, it’s talk, talk, talk and more talk, and there’s just no getting away with that when all that talk is just reciting dialogue. When you’re discussing something you’re passionate about, there are layers to it; you’ve thought about what you’re going to say, you’re thinking about it while you’re saying it and then you’re emoting after you’ve gotten it all out and begin to get a reaction. That doesn’t exist in “Cesar Chavez.” It’s merely delivering the lines and moving on.

Luna takes a similar approach to the piece from a technical standpoint. It’s just about covering the dialogue, the little bit of action and that’s all. There’s seemingly no thought behind the shot selection beyond just getting the necessary coverage, an issue that absolutely contributes to the film’s lack of emotional beats. Whereas new revelations could have been amplified by simply moving from a medium-sized shot to a close-up, Luna just sticks with the basics, making the visuals as flat as the script.

“Cesar Chavez” isn’t a devastating failure, but it’s very disappointing when someone so exceptional winds up with a biopic that’s so unexceptional in every respect. Based on the final product, it’s hard to believe this was someone’s passion project because the quality of work here just reflects a need to get a job done and nothing more. 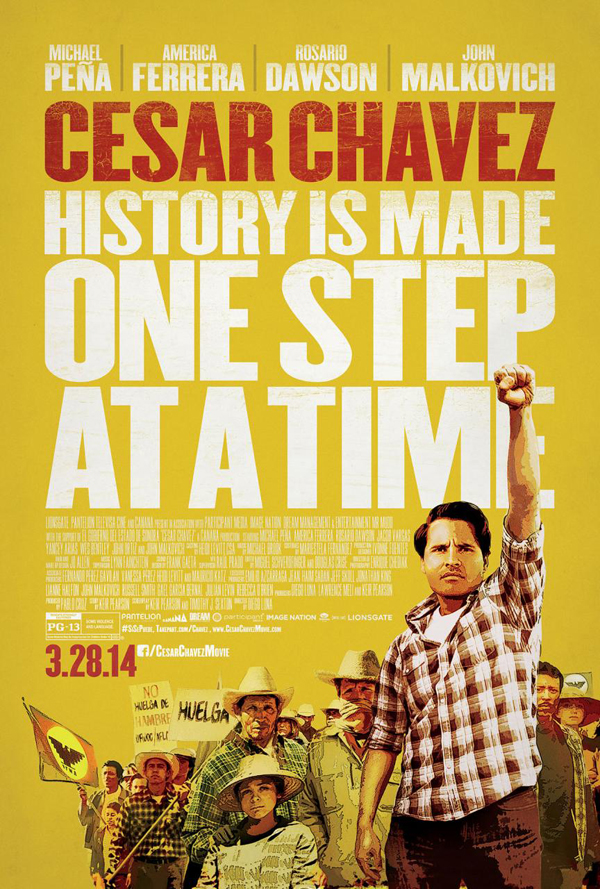