Ever since “Breaking Bad” went on the air, Aaron Paul’s name has been synonymous with his fictional character Jesse Pinkman. It gained him the sort of insane amount of recognition an actor can only dream of having, and few are about to accomplish, in his career. Now that “Breaking Bad” is over with, what is Aaron Paul to do? Why, go behind the wheel of some sweet sports cars and rip it up in the new movie “Need For Speed.” 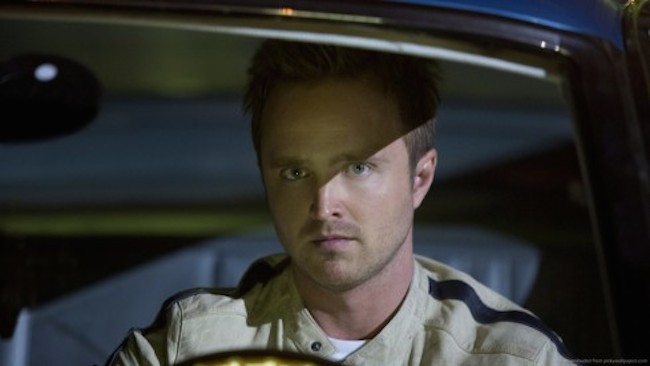 “Need For Speed” follows Tobey (Aaron Paul), a former car mechanic who’s thrown in jail after being framed for the murder of his associate. Once he’s out of jail, Tobey goes on a cross-country journey, hellbent on revenge against the man who’s truly responsible for the crime. ShockYa.com got the chance to speak with the ever charming Aaron Paul about stunt driving, working with Imogen Poots and his interaction with “Breaking Bad” fans.

What was some of your preconceptions or your initial impressions of when you got it and how did it change as you were getting into the character?

Aaron Paul: To be honest, when I saw “Need For Speed” the script on my desk, I thought to myself oh no. Before I read it I did not expect much from it. Nothing against the game, the game is great and super fun. They’ve made 18 of them. They definitely know what they’re doing, and now they’re making it into a movie. What’s so great about “Need For Speed,” the video game had no narrative so we could really put any story we wanted to the name “Need For Speed,” as long as we were using the same sort of dynamics used in the game. As long as we were using super fast cars and we put the audience in the driver’s seat. I thought they put a really great, honest, fun, touching story. When I started reading the script, I was instantly invested in these characters. I cared about these characters, and then after I was done reading it, it was such a fun ride and that’s why I wanted to be a part of it.

How was it like learning to do stunt driving for this film?

Aaron Paul: Probably the most difficult for me technically, there was a shot that I knew they wanted me before we even started shooting, because on the track they had me practice it so much. On the day, it’s me flying over the bridge. Everyone saw it, yea? After Pete falls off the bridge and dies, it’s when Tobey flips the car around. So I had to flip the car around, bring the car back and fly to the camera about 75-80 miles an hour. Then I had to pull the E-brake and have it slide almost to a 180 and stop within inches of the lens. So that was a little scary, because I didn’t want to hit… and it wasn’t our camera guy during this particular shot, it was Scott [Waugh] our director. He took the camera, because I don’t think any of the cameramen wanted to be in that position, and so Scott’s holding it and first take I came about 15 feet shy of the camera. He came up to me and said “Listen, I need you within inches of the matte box. I need the audience to know that this is you driving. I can’t even see you 15 feet away.” I go okay. “If you hit me, don’t worry about it. I’ll just roll over the hood of the car.” Uh, okay. That didn’t make me feel better about the situation. He goes “If you go past your mark, don’t worry about it. I’ll just sense it and I’ll roll over the car.” And so by the 3rd take I got it by about this far from the matte box. That was probably the most nervous I was.

Which professional drivers were you working with throughout the shoot?

Aaron Paul: Yea, yea. It was Lance Gilbert, who you’ll be talking to, he’s our stunt coordinator. He’s 3rd generation stunt man and he’s just a badass. He just lives and breathes stunts. He just really knows what he’s doing. The people that run the track, they have a whole school out there. So if you guys just want to do it… When I have kids I’ll definitely send them to this track because the first few days was just really learning how to get out of problematic situations, and that’s what they wanted… their main priority was safety. 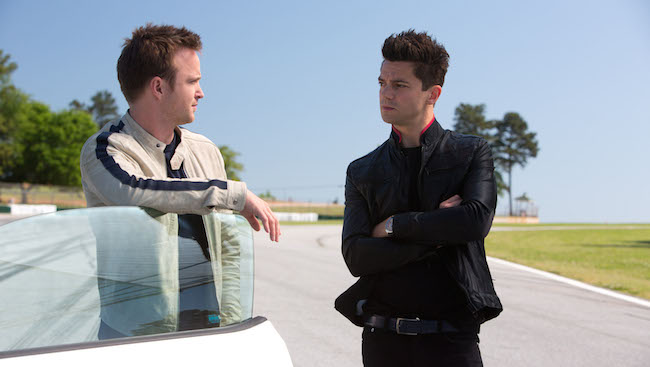 How was your working relationship with Scott and how much freedom did you have as an actor to just improvise or move the comma around as it were?

Aaron Paul: You know, in all honesty everything was on the page. It was. Working with Scott, you get on set and he’s just a big kid working with his favorite toys. It was such a fun working environment, but he had a very specific structure to stay on. He wanted to do a throwback to the classic films that he believes really started the genre, such as “Bullitt,” “Vanishing Point,” “Smokey and the Bandit,” all of these films that had no CG. They had to do their own stunts because there was no such thing as CG back then. He said that we could improvise if we wanted to, if we felt like it was necessary but most of it is kind of stuck to the page. I think Benny, Scott Mescudi, he improvised quite a bit and I thought that it was just so brilliant.

Touching upon that, what was it like working with the rest of the cast, especially with Imogen [Poots] since you’re with her in the car for most of the movie.

Aaron Paul: I just dragged Imogen along with me. I was doing a film with her in London called “A Long Way Down” when this offer came in, and then they said that the top female choice was Imogen. I already knew that I loved her so much, and we got along so well, and the idea of being stuck with a car with her for 80% of the movie was great. So I’m like yes, pick her. That’s a great choice. So she had some meetings and decided to come play with us. The entire Marshall Motors crew, we instantly connected when we got on set. We’re still very, very close.

The post-“Breaking Bad” life, what is it like? Is it much different? Do you still talk to Bryan Cranston much?

Aaron Paul: Yea I do. I just talked to Bryan the other day. It’s been good. We’re such a family on that show, and I hope it stays that way for as long as possible, but I know Bryan and I will be friends until one of us dies.

The movie characterizes him at the beginning as a racer, as patient. Is there a certain disposition that the character needed to have to sort of embody this guy who’s the best racer?

Aaron Paul: Yea. I think it’s real confidence and just drive. I’m so used to playing a character that’s so broken and tortured and just lonely and sad. So it was kind of nice to jump into a different skin of a guy that’s really confident and driven and very focused. So I think he needed to have all those qualities.

Well I talked to you actually during the edit bay visit, and I mentioned to you getting a No Bitch Clause.

Aaron Paul: I do actually. Usually it’s very kind. They’re like “Oh my God, yo bitch! Hey, how are you?” And then I’m like hey, yo, what’s up bitch. But then sometimes people are screaming it loud, and I might be walking from my dinner table at a restaurant and a guy will be like a little drunk and just start screaming “bitch!” Those people I tend to ignore.

Does the notion of returning for more, is that something that you’ve considered before you’ve signed onto something like this? Are you for or against, as part of your consideration, taking on a role like this?

Aaron Paul: Yea, that’s another big part of it, and the reason why I was a little hesitant. Of course, if this film does well, they as a studio would definitely like to do more. After reading the script, I thought ti was such a fun ride and then working with this great group of people, if it does well and they want to do more, I know I can speak for pretty much everyone involved that we would love to get the band back together and do it all over again.

“Need For Speed” is out in theaters now.