A tense, knotty (in more ways than one) valentine of leaching amorality that evokes memories of the infamous Milgram Experiment, the darkly comedic psychological horror film “Cheap Thrills” is a satisfyingly warped walk on the wild side. Playing puppet master to wonderful effect, director E.L. Katz oversees a superb, smartly constrained technical package and a rich quartet of gripping performances, resulting in a violent, emotionally charged romp with surprising undertones of social commentary.

Los Angeleno and would-be writer Craig Daniels (Pat Healy, of “Compliance”) is feeling the pinch of his occupational failings, what with a 15-month-old son and the eviction notice that greets him on his door as he heads out to work at an oil change establishment. Later in the day, he’s fired — the result of some unfortunate downsizing. Unable to immediately face his wife, Audrey (Amanda Fuller), Craig heads out for a drink at a dive bar, where he runs into an old friend from high school, Vince (Ethan Embry).

In short order, Craig and Vince meet a pair of generous partiers, Colin (David Koechner) and his perpetually texting wife Violet (Sara Paxton). At first they seem only a bit quirky, but when they all repair to Colin’s well-appointed Hollywood Hills home, it’s not long before an underlying amorality is revealed. A series of friendly bets become decidedly less so; soon Craig and Vince are shitting in Colin’s neighbor’s house (there’s a dog that’s been annoying him), and then much, much worse — all for cash that Colin doles out without a care. A grim race to the bottom of the ethical barrel ensues.

In a movie like “Saw,” the villainous Jigsaw had a rationalized motivation — and indeed, what might be described as an overarching worldview. That’s somewhat lacking here in what motivates Colin and Violet (at least in more explicitly underlined fashion), but the script for “Cheap Thrills,” by Trent Haaga and David Chirchirillo, deftly taps into latent fraternal competitiveness and socioeconomic class conflict between friends. As it unspools, it also assays moral rot, and the fissure points in the America that exists for the “rest of us” majority when one-percenters see fit to make entertainment out of our financial desperation. The allegory connects with a bracing thump, even if it’s not the main thing.

On a more immediate level, “Cheap Thrills” works because of its superlative cast, all of whom deliver wonderful performances. While still lined with larger-than-life notes, Koechner gets to showcase a darker nature than his supporting roles in movies like “Anchorman: The Legend of Ron Burgundy” and “A Good Old-Fashioned Orgy” have afforded. Paxton, meanwhile, imbues her blithe vixen with an unsettling detachment that registers outside of the movie. It’s Healy, though, who’s the film’s anchor. Clean-scrubbed and bespectacled, but with healthy pinches of anxiety and exasperation, he has the perfect countenance for “Cheap Thrills” — a surrogate for Everyman America, struggling through a dark game that may or may not be totally rigged but is surely damaging to his soul. 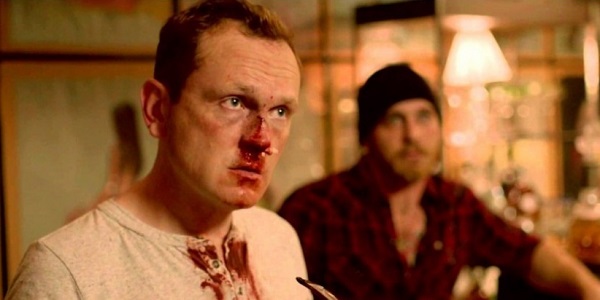