It’s possible for a movie to confirm the innate filmmaking gifts of its helmer while still not quite succeeding as a standalone film. Such is the case with the artful yet frustrating “Hide Your Smiling Faces,” directed by Daniel Patrick Carbone. A coming-of-age drama that values tone over incident, the movie pays homage to the impressionistic moves and rhythms of Terrence Malick, but has trouble establishing a strong and memorable identity of its own.

Reminiscent of films like David Gordon Green’s stirring debut, “George Washington,” and, more recently, “Tchoupitoulas” and “Only the Young,” Carbone’s movie centers on a pair of brothers, 14-year-old Eric (Nathan Varnson) and nine-year-old Tommy (Ryan Jones), who, in the aftermath of the death of an acquaintance in their small, wooded town, grapple with changing relationships and a lingering sense of unease. Wrestling outdoors with friends, disagreement with a neighbor over their dog and general family quarreling — all take on an escalated and charged quality in the weeks and months following this tragic death.

On a technical level, “Hide Your Smiling Faces” is evocatively constructed, and bracing for the manner in which stands distinctly apart from the usual pat and solicitous construction of so many American independent films. Working with director of photography Nick Bentgen and production designer Charlotte Royer, Carbone crafts a work that plays almost like a song — a moody, slow-winding dirge penned by My Morning Jacket or Death Cab for Cutie or some other indie band. Once one acclimates to the general lack of beckoning forward momentum, and submits to its atmospheric vibe, there are pockets of genuine beauty to be found in the unfussy, naturalistic presentation.

Certainly Carbone sets the stage for a too-soon adolescent confrontation with mortality, which can manifest in all sorts of ways, including isolation. But if teenagers (and even middle school-aged tweens) are a bundle of contradictory impulses in which innocence and rebellion abut one another, Carbone doesn’t dig into the changes in the world surrounding them in a realistic and satisfying way. It’s fine to opt for a less-is-more approach, and it’s also understandable as a choice for his main characters not to have the means and wherewithal to articulate some of their most turbulent feelings (in one sequence Eric answers a slow drip of questions from his brother on a variety of subjects with “I don’t know,” over and over). But the adults surrounding Eric and Tommy feel just as hapless and wholly reactive, and not fully formed. Without something, anything, driving “Hide Your Smiling Faces,” it feels too much like a cork bobbing along on a placid ocean. It’s beguiling at times, but doesn’t cohere into something greater than the sum of its parts.

NOTE: In addition to its theatrical engagements, “Hide Your Smiling Faces” is also available across VOD platforms. For more information, visit the film’s eponymous website. 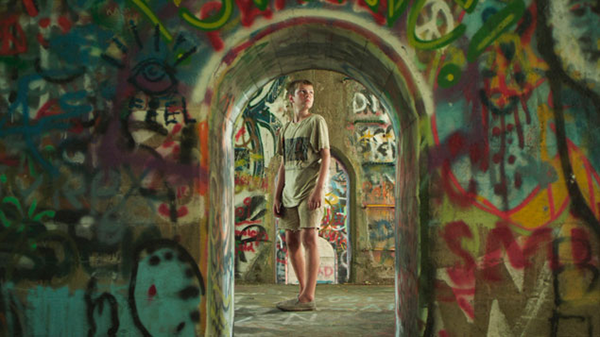