On My Way Movie Review

Title: On My Way

Cineastes the world over can readily agree that Catherine Deneuve, who came of age as the muse of a number of influential filmmakers in the 1960s and ’70s, is an enchanting screen presence. And they can presumably agree that quality, leading roles for women as they age — complex roles in which they drive the action and don’t stand as an accessory to the men in their characters’ lives — are at a premium. Reasonable minds can agree on these things and still not walk away thrilled and uplifted by “On My Way,” the road trip venture writer-director Emmanuelle Bercot crafted especially for Deneuve. A competition premiere at last year’s Berlin Film Festival, this testy and at times offbeat French import, more ramshackle than pleasingly ambling, never gels in a meaningful manner.

Deneuve stars as Bettie, a harried small town restaurant owner and former beauty queen who, after finding out from her mother that her longtime (married) lover has finally left his wife, except for yet another (25-year-old) woman, throws caution to the wind and impulsively walks out on the routines and order of her life. Attempting to shake free of a lifetime of regrets, Bettie leaves work and simply drives, ending up in an even smaller, off-the-beaten-path burgh where flings with younger men are easier to come by than cigarettes. Eventually she comes into custody of an unexpected and considerably difficult traveling companion — her 11-year-old grandson Charly (Nemo Schiffman).

“On My Way” prizes discrete incident over any sort of structure, so there isn’t really any sense of rising tension or release contained herein. It’s not hard to feel like Bercot’s film has some interesting and perhaps poison-tongued feelings about the manner in which French culture treats its women; “You must’ve been stunning — a real beauty,” says Marco (Paul Hamy) casually, the morning after bedding Bettie. But “On My Way” never gives Bettie full voice to those feelings. Deneuve capably fleshes out the role, imbuing her with quiet moments of angst, frustration, bemusement and vulnerability. But the whole is so much less than the sum of its parts. “On My Way” feels like a nice idea for a short film stretched in taffy-like fashion to a tedious 116 minutes. “All you care about are your restaurant and lovers!” rages Bettie’s daughter at one point. She might be right, but we don’t really know. And more importantly, we don’t really care.

NOTE: In addition to its ongoing theatrical engagements, “On My Way” expands this week in Los Angeles, opening at the Laemmle Playhouse 7, the Laemmle Town Center and the Regal Westpark. 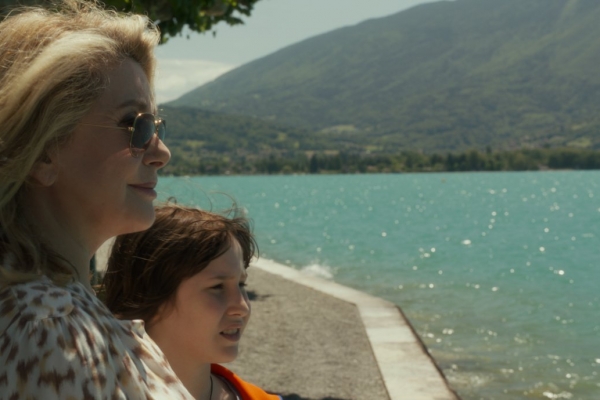