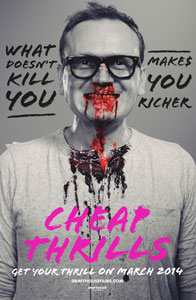 You know Pat Healy, right? Well, if you don’t, that means you probably haven’t seen “The Great World of Sound,” “The Innkeepers,” or “Compliance,” and that also means you have quite a bit of movie watching to do. But before you get to any of that, Healy’s latest feature is an absolute must. In fact, “Cheap Thrills” is easily the best film I caught on the film festival circuit in 2013.

Healy leads as Craig, a loving husband and father who gets slapped with an eviction notice and loses his job all in the same day. In an effort to ease the pain, Craig hits the bar and that’s where he happens to bump into an old high school friend, Vince (Ethan Embry). A few drinks in, they’re joined by another couple Colin and Violet (David Koechner and Sara Paxton). Colin doesn’t just enjoy sharing a little of his wealth by buying Craig and Vince drinks; he wants to share a significant amount of it in exchange for dares. At first, it’s simple things like being the first to take a shot and antagonizing a bouncer, but the higher the payout, the more intense the dare, and with his home and family on the line, Craig proves to be quite the contender.

Healy has made a name for himself by carefully selecting worthy projects, assuming interesting and layered characters, and working with passionate people in the independent film realm, but at the start of his career, he was somewhat driven by that all-too-familiar dream of becoming a Hollywood star:

“As a kid, this is how I got into the business, you know, is loving movies and wanting to be a movie star. Even though I was very serious about being an actor and studying in school, and working at Steppenwolf Theatre in Chicago and emulating these great actors that I love … I was very serious about acting, but that feeling remained, of to be a movie star, you know? Whatever that meant. And that’s why I moved to Hollywood.”

After moving to Los Angeles in 1998, Healy worked steadily for quite some time, but his career wasn’t developing the way he hoped.

“It was like a lot of lateral moves. It wasn’t really progressing the way that I had thought it would. And I realized that a lot of it was a childlike idea of what that success is, you know? You grow up and you don’t settle, but you get more realistic about what it is and what you actually want, you know? That sort of level of fame is something that I know I would never be comfortable with now and these movies are smaller, but I get to really shine.”

It’s of the utmost importance that Healy feels as though he has something to bring to a production before signing on, but he also insists that each and every opportunity gives him the chance to learn something about himself as well, and that was the case more so than ever with “Cheap Thrills.”

“I learned the most from that – the most of all from that one, particularly because I always play a lot of repressed characters in these movies whether it’s that guy in ‘Great World of Sound’ who’s kind of too scared to really engage with the world or in ‘Innkeepers,’ a guy who’s afraid to try and express his real feelings and has problems with that, or in ‘Compliance’ I’m completely coiled up. I don’t let any of it out, you know? And in this film I got to be that person in the beginning and then by the end of it, let it all out. It was just so cathartic.”

Clearly “Cheap Thrills” was a win for Healy and it’s one for all of us, too. Had this movie gotten a 2013 theatrical release, it undoubtedly would have made my top ten films of the year list. So far, so good for “Cheap Thrills” in 2014, but as we’re only at the end of March, of course, I can’t make any guarantees in that respect just yet. But what I can guarantee is that whether you opt to catch “Cheap Thrills” in theaters, on VOD or DVD, it will be well worth your time and money.

This is a standout first feature from director E.L. Katz, exhibiting an astounding control over the visuals and tone, and also a triumph for the actors involved. As Healy mentions in our interview, “Cheap Thrills” could have easily spun out of control and become silly, but because every member of the cast manages to deliver a grounded performance and because Katz knows exactly how to use and further enhance those performances, “Cheap Thrills” winds up being a highly effective thrill for horror lovers, and an exceptionally thoughtful and poignant one, too.

Clearly I can’t recommend “Cheap Thrills” enough, so be sure to catch it in Austin, Texas, New York City, Los Angeles, San Francisco and Tempe, Arizona now, and keep an eye out as it expands over the next few weeks. The film is also available on VOD and will hit DVD and Blu-ray on May 27th and is currently available for pre-order right here. For more on Healy’s career and his experience making “Cheap Thrills,” check out our full chat with the actor below.