A well-meaning documentary that advocates for a broader societal acceptance of addiction as a chronic disease of the brain, “The Anonymous People” leads with its considerable heart, but can’t summon the sort of order and focus necessary to convert generalized sympathy into stronger lasting memory and impulse for action. Flitting to and fro, and alighting on a wide range of related but not always smoothly integrated topics — from the founding of Alcoholics Anonymous and biased drug infraction prison sentencing to a series of testimonials from public figures and arguments for greater health care control subsidies for addicts — the movie carries an important message, but too often feels like a sermon for the choir.

One of the first films to receive funding through Vimeo’s Audience Development Program, “The Anonymous People” operates from a place of pique, arguing, with sometimes more anecdotal feeling than actual evidence, that there’s a certain cultural closet which keeps many addicts living in shame. In fact, while it seems very insular and self-reflective, this intra-group debate about the benefits and detriments of embracing public anonymity in recovery — which comprises a large portion of the movie’s first half-hour — is actually among its most interesting passages, because it digs into the marrow of what it means to embrace and own one’s addiction, in an effort to tame it.

In short order, however, “The Anonymous People” transitions into discrete stand-along bits with some of the aforementioned focus. There are personal discussions of long-term recovery, too, with scattered segments inclusive of interviews and public speech clips with Kristen Johnston, former Miss USA Tara Conner, former Rhode Island state senator Tom Coderre and ex-NBA player Chris Herren. Director Greg Williams, himself a young addict, contributes a sporadic narration, but fails to devise a framing device that makes much sense. There are segments with community-based activists whose doggedness makes you want to give them a hug. Overall, though, Williams’ film doesn’t cohere into something greater than the sum of its fitfully argued parts.

NOTE: “The Anonymous People” opens in Los Angeles at the Laemmle Monica 4-Plex. In addition to this and its other theatrical engagements, the film is also available exclusively on Vimeo On Demand. 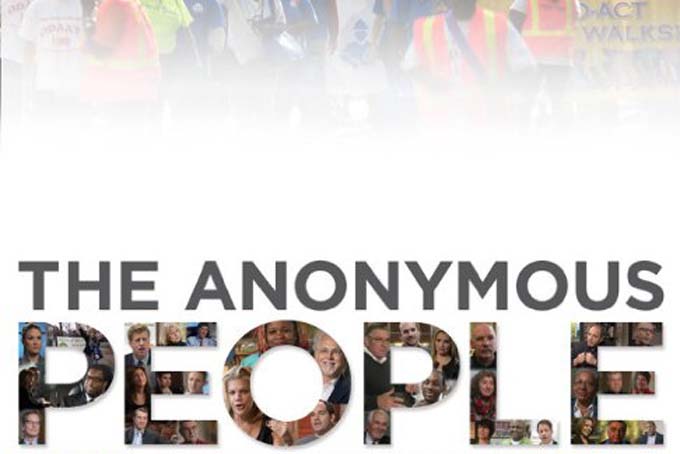