One of the true delights of the Julien Dubuque International Film Festival, where it recently picked up a prize for Best Use of Music, “Sunken City” is an almost perfectly modulated low-budget indie with a keen sense of place. Fans of “The Big Lebowski” will appreciate and find reward in this loose-limbed crime comedy, which locates its sweet spot in stoner humor and dry send-up of noir conventions, as well as a strong lead performance.

“Sunken City” unfolds in the Los Angeles port neighborhood of San Pedro, where Detective Nick Terry (Hamilton von Watts) has the sort of dyed-in-the-wool love for his hometown (“I’d have to have brain damage to leave San Pedro!”) that manifests in umbrage for those who would dare not pronounce the city’s name with a long e. A wake-and-bake loafer cop who collects urine from his dog in order to pass his drug test, Terry is on community service detail, pressing the flesh at local schools and retirement homes, spreading the good word about the good work of the San Pedro PD. He doesn’t much mind, though. It gives him more time to spend with his Jamaican-born friend and informant Spice (Cyrus Farmer), a cook at a dockside chowder house.

Then a girl washes up dead, and Terry’s captain (Spencer Garrett) tasks him with leading up the investigation. Terry is initially motivated to solve the case just so he can get back to his kush life as quickly as possible as by any higher calling. He’s also keen to spend more time with Donna (Monique Gabriela Curnen), the shop owner from whom he buys piñatas for his dog to chew on during his days away from home. But several of the case’s clues point to having something to do with a spiked blend of marijuana, which is of course one of Terry’s specialties. This leads him up a ladder of shady characters, including Bruno (Richard Tyson), Paz (Vinicius Machado) and Miguel (Ivo Nandi).

Director Ryan McLaughlin, working from a story concocted with von Watts and screenwriter Todd Samovitz, uses a laconic voiceover to wonderful effect. It’s ladled on just right, giving “Sunken City” enough of a sense of commentary and self-awareness to qualify as winking while never tipping over into aimless spoof. It helps, certainly, that there’s such a comfortable, wooly vibe to the film, all the way to its core; the plot feels sort of like an episode of “Hunter” or some other old cop show crossed with a modern noir, and a few trace elements of touchstones like “Twin Peaks” (the dead girl) and the aforementioned Coen brothers’ film thrown in for good measure.

There’s a wry, Bob Odenkirk vibe to von Watts, and he truly gives the movie an anchoring presence; ten minutes with his character, and you’re hooked. And the music, by Bill Wendt, Jared Meeker and Blake Colie, is truly wonderful as well, blending an array of original reggae tracks and a simple yet evocative score that lends the proceedings a dry, ironic counterpoint.

“Sunken City” gets a little lost in the weeds in some of its third act plotting, when it tries to simultaneously pay off and wrap up things in sprawling, left-and-right fashion, misreading the more fundamental, character-rooted nature of its appeal. Still, this is a winning indie effort with strong across-the-board contributions from all of its major players.

NOTE: “Sunken City” is now available on pay-per-view and digital download. For more information, visit its website at www.SunkenCityMovie.com. 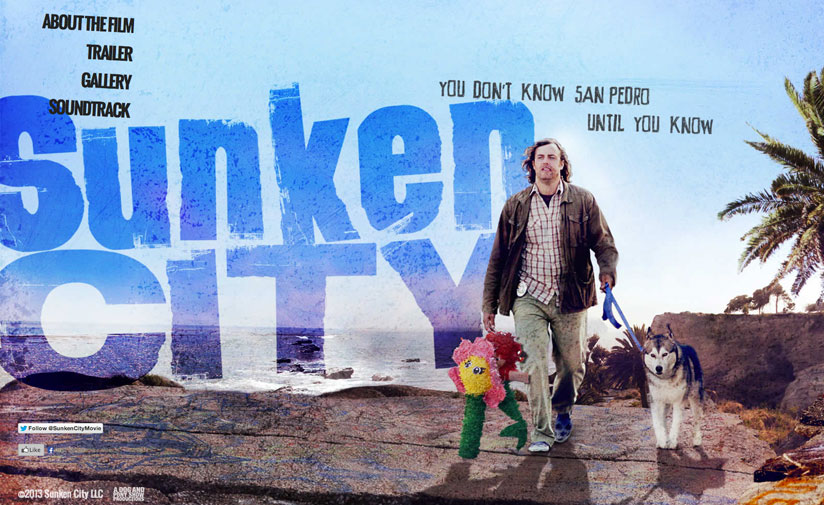