On the verge of Christopher Smith’s 30th birthday, he decides he wants to move to a plot of land in Colorado and live in a Tiny house that he will build himself; Christopher has no construction related experience.  With the help of his girlfriend Merete, they hope to complete building within 3 months; however they run into some problems along the way, and takes much longer than anticipated. They document the entire building experience, and interview several other singles, couples and families who have also made their own homes and live simpler.

The Good: Ever since I saw a tiny-homeowner featured on Yahoo over a year ago I’ve been fascinated at the idea of building a home and after seeing this film, I am still up for it.  Each person they interviewed were honest about the downsides of downsizing – compost toilets, showering and overall lack of space, they were happier because of they were relieved of the stresses of debt and focus more on need over want.  The cinematography is great for their modest budget. The behind the scenes featurette in the special features show how they got some absolutely beautiful shots.  Dee Williams (check out her TEDx Talk on this subject) extended interview paints a picture of strength as well as loneliness as she decided to build her tiny house and living alone with her dog as she was diagnosed with congestive heart failure. It’s a little sad, but also empowering.

The Bad: There’s a family of 4 that built their 348 square foot Tiny house for just over $8k, and it took Chris and Merete over $22k; they could’ve bought a mobile home for that amount.  This film is a good instructional video to show that more planning is required when making a life-changing decision that could possibly put you in more debt.  Chris set aside 3 months of his life and thought he could complete an entire house in that time, practically by himself? I sort of feel bad for his girlfriend Merete. At least she kept her own life on track while he was floating along on his childhood dream. If I saw my spouse having to stop what they’re doing to watch a Youtube video on how to run electric wiring through the house that I would be living in also, I would have to say “eff this” and leave.

The thought of chucking most of our worldly possessions, downsizing our lives to fit inside 124 square feet is scary, but for many people it’s a great way to help people realize how to live within their means and alleviate so much debt.  With the economy the way it is, people are now realizing that the desire to own a McMansion is passé. It’s all about living simpler and cleaner, and not hoarding a cache of crap we don’t need.  It’s no longer a daydream for hippies. 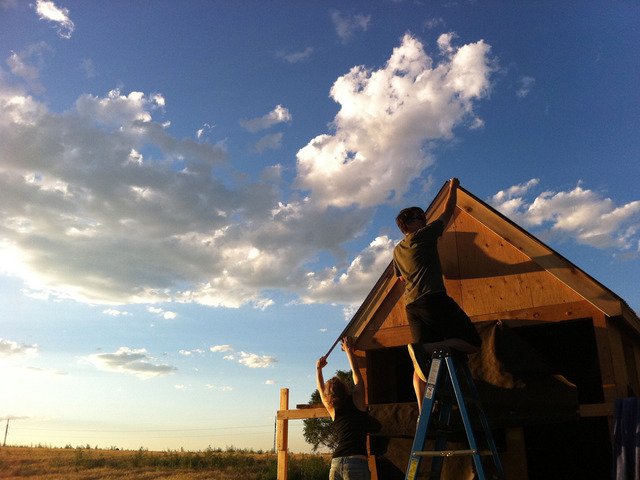