Approaching a seemingly harrowing and unfamiliar experience that not many other people have had, or at least are willing to discuss, can be a confusing and daunting one. Gillian Robespierre, who made her feature film writing and directorial debuts with the new romantic comedy, ‘Obvious Child,’ fearlessly took on the job of independent filmmaking, an industry which is mainly led and driven by men. Not only did she daringly make a realistic examination of how men and women truly approach each other in the early, awkward stages of romantic relationships in the indie film, but the director also bravely examined a subject not often discussed in movies-abortions. The film accurately depicts a single young woman’s rights and reality of choosing to end her unplanned pregnancy, as she has realistically accepted that she’s not yet ready to have a child. While the lead character has an interest in getting to know the father of her child better, and contends with some regret over choosing to end the pregnancy, she knows the choice will finally allow her to mature and accept responsibility for her actions.

‘Obvious Child’ follows stand-up comedian Donna Stern (Jenny Slate) as her boyfriend breaks up with her and she finds out the book store she has worked at the past five years is closing. While she still has some growing up to do in order to turn her life around, she unapologetically speaks her mind on and off stage, and isn’t afraid to be silly, frank and lewd. To make herself feel better that her newly ex-boyfriend cheated on her with one of her friends, and her parents are continuously lecturing her on making better life choices, Donna has a night stand after a dismal performance.

Donna is drawn to Max (Jake Lacy), who she met at the bar on the night of her disastrous stand-up routine, because he’s not at all like her ex-boyfriend and most men she’s usually been attracted to throughout her life. The studious professional is actually concerned about Donna’s emotional well-being, enough so that he actually tracks her down a few weeks later, as she’s helping to close the bookstore. But she’s afraid to reveal to him is that she became pregnant after their one night together, as her roommate and friend, Nellie (Gaby Hoffmann), is encouraging her to have an abortion. While she’s becoming more attached to Max the more she gets to know him, she accepts the fact she’s not intellectually or financially unprepared to have a child. But she ultimately pushes Max away as she contends with her difficult decision on her own. In the process, Donna comes to realize that in order to be brave in all areas of her life, not just on stage, she has to learn how to trust people, especially Max.

Robespierre smartly, emotionally and relatably approached the serious issue of abortion in ‘Obvious Child,’ the feature film adaption of her 2009 short film of the same name. Consulting with Planned Parenthood truly allowed the writer-director to expressively convey the heightened anxiety and dread Donna experienced while getting to know Max, and trying to decide what to do about her pregnancy. With ‘Obvious Child,’ the scribe-helmer courageously and realistically approached abortion, a subject that’s still seen as taboo in films. With many on screen unplanned pregnancies are still resulting in false alarms, or the parents choosing to raise the child, Donna’s decision to have an abortion is presented with honesty as she battles a sense of regret over not yet being ready to have a child.

Slate, who’s also a stand-up comedian who made a name for herself on the 2009-2010 season of ‘Saturday Night Live,’ as well as such comedy shows as ‘Parks and Recreation’ and ‘House of Lies,’ was the perfect casting choice for the role of Donna. The actress understood Donna’s tough demeanor of not fully trusting anyone who has different life perspectives and could emotionally hurt her. Slate effortlessly infused her character with a longing to want to like Max and trust he’ll take care of her, but approaches the relationship with caution because she expects him to be like her ex-boyfriend and not stand by her. Sleeping with Max initially eased Donna’s doubts of not being attractive to, and worthy of attention from, the opposite sex. But conversely, finding out she was pregnant after their night together pushed her to truly examine her ideas on relationships, and where she wants to take her life, both personally and professionally.

While the characters and themes in ‘Obvious Child’ don’t fit into the typical stereotypes of Hollywood romantic comedies, Robespierre masterfully created a genuine, authentic love story about the seemingly implausible relationship between Donna and Max. While the two are drastically different on the surface-Donna isn’t afraid to speak her mind on stage, but has difficulties going after what she truly wants in the rest of her life, while Max is determined to carry out his life’s set goals-they both desire the chance to find someone who truly understands them. Understanding Donna’s mindset of wanting to be appreciated for who she is, Slate relatably infused the protagonist with a sense of knowing what she needs to do in order to get her life on track, even though she’s struggling with regret and shame over how her life has turned out. While abortion is a serious issue many woman contend with every day, the director and Slate respectfully approach Donna’s conflict with a sense of honor and comedy, to showcase that people often do rely on humor to lighten their struggles. 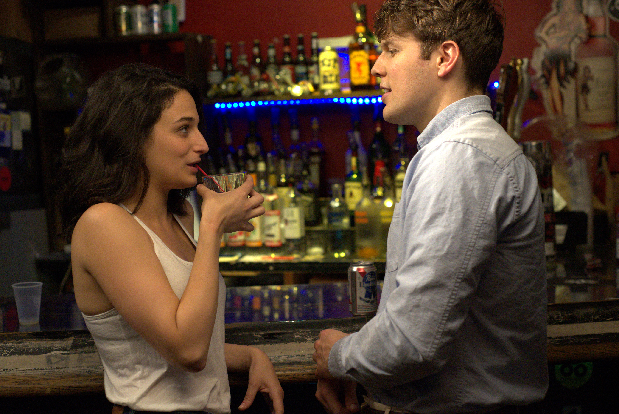