Given its fairly reliable audience base, the horror genre affords burgeoning filmmakers the chance to showcase their skills in inventive fashion, which the fresh, technically accomplished “Afflicted” surely does. A shared effort in just about every way between writer-director-actors Clif Prowse and Derek Lee, the movie — a Toronto Film Festival selection and a smash hit at Fantastic Fest last year — chronicles an international video travelogue gone wrong, when one of the pair has an encounter with a mysterious Parisian woman and succumbs to an illness that includes all sorts of uncomfortable transformations. For ShockYa, Brent Simon recently had a chance to speak to Prowse and Lee one-on-two, about trading on their longtime real-life friendship for their movie, and where they see their careers heading. The conversation is excerpted below:

ShockYa: This film really communicates a shared history together. Even though it’s your first feature, it feels like the culmination of previous efforts, the visible tip of a much bigger iceberg, if that makes sense. So I’d be interested in the trajectory of the project — your first meeting as youngsters, and all the shorts that you did that kind of seem to serve as the offscreen underpinning for this effort.

Derek Lee: The back story in the movie is pretty accurate — Clif and I met in grade school English, and I cheated off of him so the story goes, which is apparently not true, but that’s just the only story we remember. We grew up with a mutual love of “Star Wars” and “Indiana Jones” and “Terminator” and “Predator” and stuff like that, and then at 16 we saw the movie “Desperado” by Robert Rodriguez, which was the greatest thing ever, we decided that we also wanted to become filmmakers. So that spawned years of us making these awful but awesome home handi-cam movies that you actually see as clips in (the beginning of) the movie, where I am for instance actually playing a Chinese-Mexican hitman. It is cinematic glory, actually. (laughs) And then at a certain point we decided to jump into making quote-unquote real films. We’d spent 10 years making cinematic short films, leading us to the point where it became obvious that we needed to make a feature film, and here we are. It all came down to this idea of what we could make on a low budget, and Clif threw out, “Let’s make a vampire documentary.” I thought that was really, really stupid until I thought about it some more and then said, “No, that’s actually really, really smart.” And here we are.

ShockYa: Found footage as a framing device is something that people think of as a way to mitigate production costs, but it actually forces a lot of constraints on yourselves, and logistical plotting. You hadn’t worked within those constraints before, so in retrospect does it seem brilliant or did you have moments where you were like, “What did we get ourselves into?”

Clif Prowse: I’m afraid of the answer that you’re looking for in that question (laughs), but for us the found footage element was kind of inherent in the concept, because when you’re taking something like vampires — which are normally presented in such a highly cinematic and stylized way — where you’re very aware of watching this cinematic mythology unfold in front of you. We thought, “What would it be like if you took some of those ideas and looked at them in real life?” That’s what made it exciting to us, and I think that was what was smart (about our idea) — there’s no way that this movie is nearly as compelling if you tell the story conventionally, where it’s Derek turning into a vampire told in regular cinematic language.

Derek Lee: Interestingly enough, in response to whether it was easier or harder, the answer is both, but in ways we didn’t necessarily expect. For instance, when it came to the cost of the visual effects, it’s actually easier because you tell your story with a very narrow frame, use sound design and get to imply a lot of big action that you don’t necessarily see. That was actually very fun and cool, to learn tricks to develop storytelling. What actually became incredibly difficult was something I didn’t expect, which was the emotional side — because you have a motivated camera in your story, if you want to get Clif’s reaction while he’s holding the camera you can’t get it. It’s incredibly difficult to have a two-way conversation with people having emotional reactions to things when the camera is facing one direction. So how do you keep the rhythm and back-and-forth going?

Clif Prowse: And one of the funny things was that particularly at the end of the movie, when it’s Derek with the camera, the way that you really understand what Derek is going through is with his breathing. (laughs) We do all these long passes of Derek’s breaths, and how anxious he is, how angry he is, how scared he is, all those things — that was his reaction shot, basically.

Derek Lee: Yeah, there’s literally hundreds of hours of recordings of me breathing.

ShockYa: There has to be some fetish site you can re-purpose that for.

ShockYa: You mentioned some of the types of films that you watched as kids and bonded over, and genre filmmaking is a great way for emerging talents to dip their toes in the waters — it offers a lot of tropes that you can twist around and play with. But whether it’s horror or other stuff, given your druthers, do you guys have other genre stories specifically that you’d like to tell?

Derek Lee: Yeah, we’re absolutely in it for the genre game. (laughs) We love “Die Hard,” “The Matrix,” “Alien” and “Aliens” and then more recently things like “Let the Right One In.” Smart and different horror movies are absolutely what get us up in the morning. We’re less likely to make a romantic comedy than we are to make a (horror movie).

Clif Prowse: What we’re really interested in are compelling character stories — like, Luc Besson’s “The Professional” is one we talk about all the time. But (our ideas) always have that genre hook. We love explosions and guts as much as the next guy, and that’s always part of the entertainment access points for us, but we also always want to tell a story that has dramatic and interesting characters.

ShockYa: What was the experience like of taking the film to Toronto for the festival?

Derek Lee: It was incredible, the reception was. Ultimately we had worked on this movie for close to four years by the time we brought it there. And when you’re taking it to Midnight Madness, first, there’s a huge stage and secondly it’s in front of a very discerning genre audience. So that really felt like a make-or-break time for the movie, like, “Okay, these are really our people, so what are they going to think?” And first of all, during the screening, someone had to leave, and then fainted in the lobby, so that’s pretty much every genre filmmaker’s dream, to be able to tell that story. And then once the movie was done and people were starting to check the Twitter feeds, (it was great) to see people responding for the same reasons why we made the movie in the first place. That was incredibly gratifying.

Clif Prowse: It was nerve-racking going into it because (one of) the guys who run the Midnight Madness section has openly said that he doesn’t like found footage movies, so when they (programmed us) it was like this huge relief even just being there. It was like, “He let us in! I can’t believe he was courageous enough to do that!” It felt like a win already.

Derek Lee: It’s funny because when we started this process we were never thinking about a theatrical release or making a splash. The original idea was to present it as this travel blog on the Internet, and it turned into this huge opportunity for us. It was the very much the culmination of this Cinderella story, where we never thought we were going to be in this situation, but once you’re there the pressure is enormous.

ShockYa: Given what you just said, that the idea was originally to program this on the web, I’d be interested in your opinion on the theatrical marketplace — is that still the bull’s-eye for you guys… or how do you see streaming and VOD impacting and intersecting with the future of independent, genre-oriented filmmaking?

Derek Lee: I think it depends entirely on the project. I think with a film like “Afflicted,” it’s about getting as many eyeballs on whatever it is you made however you can. I think you’re very aptly pointing out that some projects will do better in newer or different media and distribution models — like, you would never put “Avatar” online as an iTunes-only download. But with this, the original concept was very much supposed to be grounded in reality, it was supposed to be this episodic, reality-based experience that you got to go through with the characters. And I think you could make the argument that there is a model for episodic storytelling (on the web). Having said that, for our careers, it’s such a boon that it got a theatrical release of any kind, because that in the industry’s mind legitimizes us more than anything else could.

ShockYa: Well, what’s next for you guys? “Afflicted” ends with some stinger tags that indicates this could be a continuing story — is that something you’re interested in and/or actively working on?

Clif Prowse: Basically our attitude is that if it ever became apparent that there was the demand for a sequel, we’d be totally open to doing that. Having said that, we’re not proactively dealing with that now. We’re writing a couple of scripts, both of which are far from the found footage landscape. …So we’re very excited about getting to have conventional coverage, have a score, get to do more sound design, expand our palettes. One script is kind of a dark, international, “Bourne”-style action movie, based in the world of human struggling. And the other film is an action movie romance that takes place in a horror movie universe.

Derek Lee: It’s a love story, but a dark and violent love story.

ShockYa: Are you then interested in continuing to appear on screen, or was that something that was unique to “Afflicted,” and its story?

Derek Lee: I think we’re good, I think we’re good. We had our stint, and it was nice and fun. (laughs) But there are so many pitfalls to being in your own movie, and it was a very smart move for us with “Afflicted” because we wanted it to feel like it was real, and it did save us some money and logistical problems, but it would take quite the act to convince us to do it again.

NOTE: “Afflicted” arrives on Blu-ray on July 1, presented in a 1080p high definition transfer, with deleted scenes, behind-the-scenes material and a special featurette that examines one of the movie’s more striking sequences, involving an uninterrupted-take with a jump through a second-floor window. 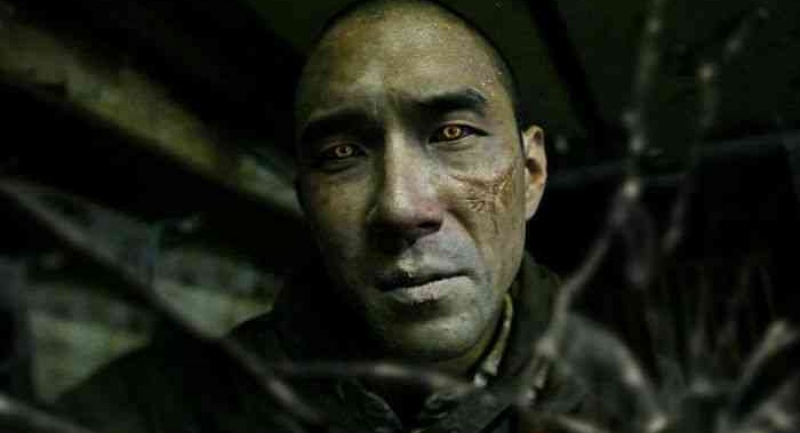