I Am Big Bird: The Caroll Spinney Story Movie Review

Title: I Am Big Bird: The Caroll Spinney Story

A warm-hearted documentary look at the man behind one of the most beloved and iconic “Sesame Street” characters of all time, “I Am Big Bird: The Caroll Spinney Story” is an interesting and enlightening biopic that delves down into the unique array of talents one might not immediately peg when they first look at the titular gangly, yellow-feathered, eight-foot-tall puppet. A recent premiere at the Los Angeles Film Festival, co-directors Dave LaMattina and Chad Walker’s movie trades on an abundance of goodwill — for the character of Big Bird, for “Sesame Street” and adolescent horizons more generally, for an era of dawning multi-culturalism, and more that it easily cultivates for its real-life subject and his wife — but eventually gets bogged down a bit in repetitive rhythms.

For better or wose, LaMattina and Walker opt for a mostly chronological tack, tracking Spinney’s life from childhood (he had a supportive mother but an abusive father, though the pair later reconciled) through a quick stop in the Air Force, and on through into his work with Judy Valentine on “The Bozo the Clown Show.” Then, in 1969, while dealing in self-effacing fashion with a technical problem that scuttled an animated short he’d produced, Spinney caught the attention of Jim Henson, who invited him to come work with him.

The rest may seem like history, but Spinney initially hated New York City, and wanted to leave. He had doubts about his talent, and went through a painful divorce in 1971. In the second season of “Sesame Street,” however, Spinney located Big Bird’s voice, and the character took off — an awkward manifestation of naivete and wonderment. (It’s not for nothing that the episode where Big Bird grapples with Mr. Hooper’s death can make adults cry while also bringing kids a measure of comfort and understanding about mortality.) Trips around the world — including to a newly open China, with Bob Hope — would follow. In Oscar the Grouch, meanwhile, Spinney found a complementary character, the grumpy flip-side to Big Bird’s shrugging optimism.

“I Am Big Bird” is grounded by conversations with Spinney, his second wife Debra and his children, but it’s also well-sourced and well-rounded. Interviews with several authors and a lot of Spinney’s “Sesame Street” colleagues — Frank Oz, Bob McGrath, “Sesame Workshop” co-founder Joan Ganz Cooney and many more — give viewers a nice glimpse behind the production curtain of that show, though contentiousness with producer/director Jon Stone is handled in slightly too-tidy fashion, in a two- or three-minute segment.

In fact, “I Am Big Bird” could use a bit more focus on dirty fingernails and arguments and brokenheartedness. Spinney is candid about bullying and an unhappy home life as a kid, but the movie doesn’t dig down as substantively as it could into just how much that shaped his art, and the fact that, in the collaborative realm of puppeteering, his two characters are basically solo acts. LaMattina and Walker lean on a score from composer Joshua Johnson that is too baldly sentimental and intrusive to boot, cowing viewers into hand-wringing, dewey-eyed identification rather than letting them come to it more naturally.

In its home stretch, the movie alights on ephemera associated with Spinney — the discovery of a murder victim, Judith Nilan, on his property; the fact that NASA originally approached him about going to outer space on what would turn out to be the ill-fated Challenger Space Shuttle; and Mitt Romney’s perhaps ill-advised targeting of Big Bird in an attempt to portray PBS as wastrels and somehow roundly emblematic of government largesse. They’re seemingly odd-end bits and pieces that don’t fit the neater narrative of Spinney’s life as one of artistic-minded uplift. In truth, though random, they fit the roller-coaster ride of his life. If only “I Am Big Bird” wasn’t quite as invested in the ups versus the downs.

NOTE: For more information on the movie, visit its website at www.IAmBigBird.com. 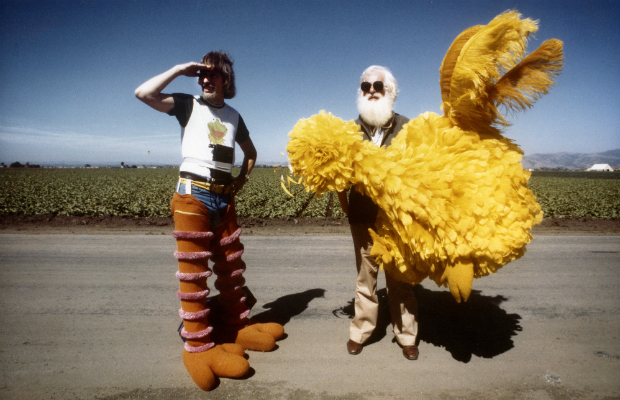