Ronda Rousey, one of the actresses in the upcoming ensemble action film, ‘The Expendables 3,’ has successfully defended her title, and is still the undefeated UFC Women’s Bantamweight champion. The actress, who plays Luna in the second sequel in the hit ‘Expendables’ series, joined her co-stars, Dolph Lundgren, Kellan Lutz and Victor Ortiz after she defeated Alexis Davis. The ultimate fighter and her fellow actors celebrated her feat following the fight.

Of Rousey’s win, Lundgren said, “Great fight. Most skilled fighter of the night.” Lutz also commented on his co-star’s feat, saying “She came, she saw, she conquered! One of the most disciplined athletes I’ve ever seen! 16 seconds…Beast mode for my girl Rousey!” Ortiz also celebrated the actress, saying “You can’t stop Ronda, even if you tried.”

Lionsgate will be releasing the action adventure movie on August 16 in theaters. The sequel was directed by ‘Red Hill’ helmer, Patrick Hughes, who made his American feature film directorial debut with ‘The Expendables 3.’ The thriller’s script was written by Sylvester Stallone, Creighton Rothenberger and Katrin Benedikt, and is based on characters created by David Callaham.

The following synopsis for ‘The Expendables 3’ has been released by Lionsgate:

In The Expendables 3, Barney (Stallone), Christmas (Statham) and the rest of the team comes face-to-face with Conrad Stonebanks (Gibson), who years ago co-founded The Expendables with Barney. Stonebanks subsequently became a ruthless arms trader and someone who Barney was forced to kill… or so he thought. Stonebanks, who eluded death once before, now is making it his mission to end The Expendables — but Barney has other plans. Barney decides that he has to fight old blood with new blood, and brings in a new era of Expendables team members, recruiting individuals who are younger, faster and more tech-savvy. The latest mission becomes a clash of classic old-school style versus high-tech expertise in the Expendables’ most personal battle yet.

For more information on ‘The Expendables 3,’ visit the follow-up’s Facebook, Twitter, Instagram, Google+ and Tumblr pages. Check out a photo of Rousey, Lundgren, Lutz and Ortiz after the UFC Wwomen’s Bantaweight Championship below. 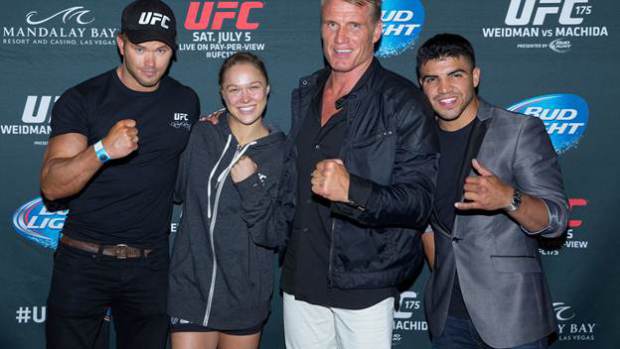